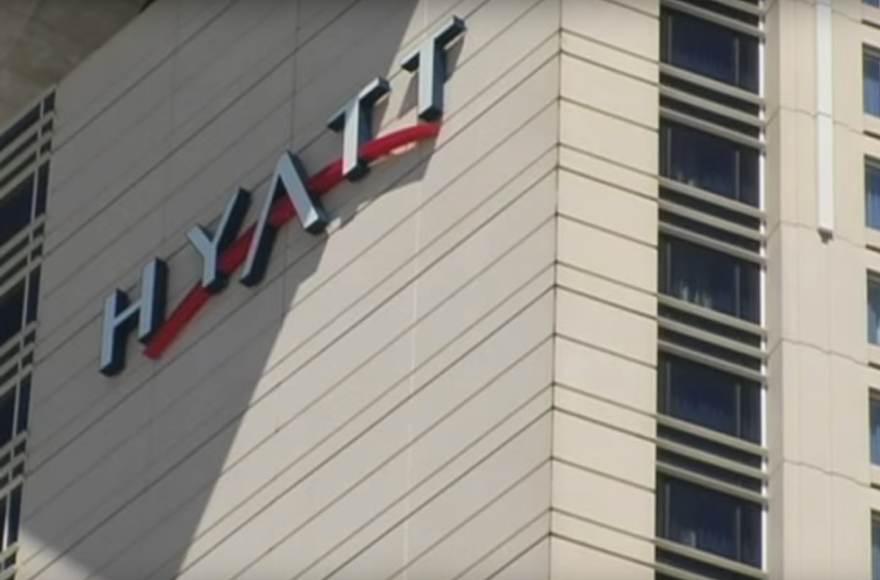 The Hyatt Regency hotel at McCormick Place in Chicago. (Screenshot from YouTube)
Advertisement

(JTA) — An Israel advocacy group criticized a pro-BDS group for denying its request to hold a memorial event for Israeli terror victims at its conference.

Jewish Voice for Peace, which is organizing the confab, said it had already planned its own general memorial event.

The Israel advocacy group StandWithUs had asked to hold a multi-faith memorial service for the victims of a 1969 deadly bombing in Jerusalem during JVP’s upcoming biannual conference. The gathering, which will take place March 30-April 2 in Chicago, will feature among its speakers Rasmeah Odeh, a Palestinian woman convicted by Israel of involvement in a 1969 terror attack that killed two.

JVP, which supports the Boycott, Divestment and Sanctions movement against Israel, confirmed to JTA that the event venue, the Hyatt McCormick Chicago hotel, had passed along the request but said it decided not to allow the service, noting it was holding its own memorial event.

The quarrel comes amid criticism from some in the Jewish world about the anti-Israel views of Odeh and Linda Sarsour, two pro-Palestinian activists who have recently taken public roles in various feminist events and are speaking together at a plenary at the JVP meeting.

Rabbi Alissa Wise, JVP’s deputy director, said her group had the right to decide the schedule at its gathering.

The JVP-organized multi-faith “memorial circle” will not focus on any particular event, Wise said.

“It’s really a space that we hold with music and poetry for people to pause in time and connect to their feelings and their grief and their mourning for the loss of life that has taken place in recent days, and past decades in the long history for organizing for justice in the region,” Wise said.

StandWithUs said it was “apprehensive” about the JVP memorial event.

“We are apprehensive about a memorial service in which a convicted and unrepentant terrorist will participate, and a service that even refuses to acknowledge Odeh’s victims. We are outraged at an organization that blocked a memorial for them,” Peggy Shapiro, Midwest director for StandWithUs, said Tuesday in a statement to JTA.
The Hyatt McCormick Chicago did not respond to a request for comment by JTA.

“Not only is JVP honoring a convicted terrorist at their conference, they have denied a request to hold a memorial service for her victims — Edward Joffe and Leon Kanner. These two young Jews no longer have voices because they died in an attack perpetrated by Rasmea Odeh, and it seems JVP is committed to silencing them even further by refusing to allow us to hold this service in their memory,” she said in a statement. “There is nothing Jewish or peaceful about this disgraceful decision.”

Odeh confessed to planting the bomb in the 1969 attack that killed Joffe and Kanner and injured nine others, though in recent years has claimed the confession was given under torture, which is disputed by Israeli officials.

She was convicted and sentenced by an Israeli military court in 1970 to life in prison for two bombing attacks on behalf of the Popular Front for the Liberation of Palestine. She spent 10 years in an Israeli prison before being released in a prisoner exchange with the PFLP in 1980.

Jewish Voice for Peace said earlier this month that it was “proud” to host Odeh, questioning the validity of her Israeli conviction.

“The accusations against Odeh stem from a context of long-standing anti-Palestinian and anti-Muslim persecution by both the Israeli state and the United States, policies which are escalating under the Trump administration,” JVP said in a March 7 statement.

Odeh was one of the leaders of the grassroots feminist International Women’s Strike. Sarsour, who organized January’s Women’s March on Washington and also helped plan the Women’s Strike, recently said there is no space in the feminist movement for those who do not criticize Israel.

(Marcy Oster contributed to this report.)