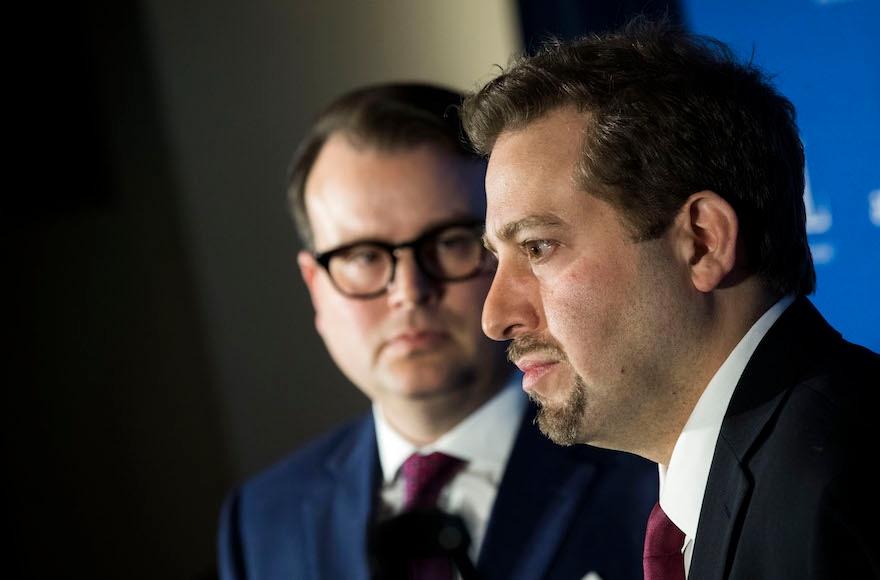 NEW YORK (JTA) — Many Jewish groups blamed white supremacists, emboldened by Donald Trump’s campaign, for the bomb threats that have plagued Jewish institutions since the beginning of this year.

It appears the groups were wrong.

The news that one Jewish teen — an Israeli, no less — was behind most of the approximately 150 bomb threats that have hit Jewish community centers since the start of 2017 is a shocking twist in light of months in which the Anti-Defamation League and other groups pointed their collective finger at the far right.

“We’re in unprecedented times,” said Oren Segal, director of the ADL’s Center on Extremism, at a March 10 news conference on the bomb threats. “We’ve never seen, ever, the volume of bomb threats that we’ve seen. White supremacists in this country feel more emboldened than they ever have before because of the public discourse and divisive rhetoric.”

The ADL has repeatedly charged Trump with emboldening extremists, anti-Semites and far-right groups in the U.S. Other groups were even more explicit in linking rising anti-Semitic acts this year to the new president. On Jan. 10, following the first wave of JCC bomb threats, Bend The Arc, a liberal Jewish group, said that “Trump helped to create the atmosphere of bigotry and violence that has resulted in these dangerous threats against Jewish institutions and individuals.”

In February, the Anne Frank Center for Mutual Respect said in a statement to Trump that “Rightly or wrongly, the most vicious anti-Semites in America are looking at you and your Administration as a nationalistic movement granting them permission to attack Jews.”

But the perpetrator of the anti-Semitic acts, while his political opinions are not known, does not fit the profile of a white supremacist. According to Israeli reports, he’s a mentally ill Israeli-American Jewish teenager.

He worked from home, using a computer lab with sophisticated equipment, encryption and transmission systems, and a powerful antenna, according to reports. And his father may have known what he was doing.

Israel’s anti-fraud squad arrested the 19-year-old suspect at his home in southern Israel and searched the premises on Thursday. He was brought to court and ordered held until March 30.

The other suspect in the bomb threats, arrested earlier in March, also does not appear connected to the far right. He’s a left-wing African-American former journalist who apparently made the calls in a convoluted vendetta against a former romantic partner.

ADL CEO Jonathan Greenblatt told JTA on Thursday that the organization stands by its prognosis of a surge in anti-Semitism and hatred in the U.S. since the campaign. Aside from the JCC bombings, Greenblatt pointed to a range of other hateful activities tied to white supremacists, from abuse of journalists on Twitter and harassment of Jews in Whitefish, Montana, to a South Carolina man who plotted a mass shooting at a synagogue.

“The impact is still the same: You’ve got children, families, the elderly, teens and others who have been terrorized by these attacks,” Greenblatt said. “We’ve seen rising levels of bigotry in ways that are brand new. The emergence of the ‘alt-right’ and the rising levels of abuse they perpetrated during the campaign against Jews and other minorities is despicable.”

The Anne Frank Center, a small group whose profile has risen in part due to the attention around the JCC threats, said in a statement Thursday that “it doesn’t matter where any suspect is from or what his or her background is.” Bend The Arc CEO Stosh Cotler said in a statement: “Violence and threats of violence, whoever or wherever they come from, are unacceptable and cannot be tolerated.”

Greenblatt and Paul Goldenberg, director of the Secure Community Network, which advises Jewish groups and institutions on security, both said the suspect’s age and location were less relevant than the fact that someone has been caught for making the threats.

“What is relevant is that an individual or individuals were placed into custody who were engaged in or involved in criminal behavior, who were looking to terrorize our community,” Goldenberg said. “I do understand why people may have believed that this was part of a larger effort.”

For longtime observers of anti-Semitism, the news showed the need to be cautious when analyzing hateful acts. Former ADL National Director Abraham Foxman, who has previously called for cooler heads in responding to recent hateful acts, said Thursday that the arrest shows the pitfalls of making assumptions.

“Always take these things seriously, but don’t jump to conclusions,” Foxman told JTA. “History has taught us the source of anti-Semitism does not come from one direction. It’s universal in its nature. … I think it is on the increase, but it’s not in epidemic proportions.”

Jonathan Sarna, a professor of American Jewish history at Brandeis University, noted that this isn’t the first time that Jews have committed anti-Semitic acts. In 1989, the former president of the Jewish Student Union at the State University of New York in Binghamton was charged with painting anti-Semitic slogans on campus.

“It is a reminder that we have to be very careful before we talk about a whole wave of anti-Semitism,” Sarna said. “Something like this will surely make everybody a little embarrassed as Jews, but also embarrassed in the sense that it’s not what people imagined it would turn out to be.”

Sarna added that this incident shows Jews may not be as hated in America as it may have seemed. He cited a recent study by the Pew Research Center showing Jews to be the most popular religious group in America.

“It’s good to take a middle ground,” he said. “Yes, there are people who hate Jews, but we’re not seeing storm troopers at the gate.”

Still, Sarna and Foxman noted the string of other anti-Semitic acts recently — the cemetery desecrations and swastika graffiti, as well as a deluge of anti-Semitic harassment on Twitter last year. Because anti-Semitic acts, beyond the JCC threats, remain frequent in the U.S., Foxman does not believe that Thursday’s arrest will lead to anyone downplaying future acts of anti-Semitism.

“It’s there,” Foxman said of anti-Semitism. “So there’s one guy who, whatever his problem was, that doesn’t change the fact that every day there are incidents of anti-Semitism in this country.”