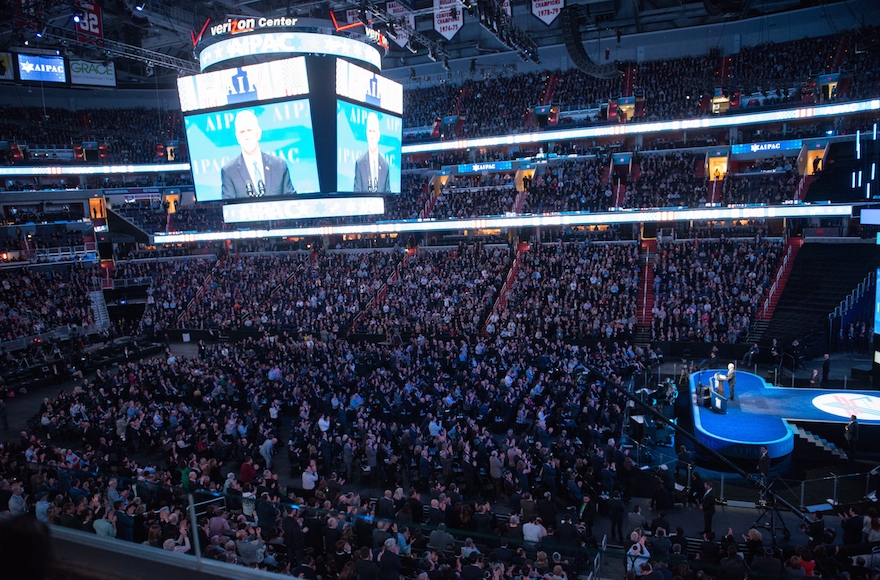 WASHINGTON (JTA) – “Many voices, one mission.”

In the video, activists are gravitating through sunny streets here toward the convention center, and titles float above them: Democrat, Republican, Independent, country music, classic rock, straight up coffee, triple-shot latte – but they’re all pro-Israel.

“Elements on each side of the aisle are trying to fracture our movement,” AIPAC’S president, Lillian Pinkus, said at the outset of the conference Sunday morning. “We will not allow, frankly cannot allow, the same divisiveness.”

Not everyone got the memo.

A “ding, dong, Obama’s gone” flavor has pervaded some speeches – and not just by Republicans. Top Israeli officials have rejoiced in the change at the White House, and AIPAC activists have responded occasionally with enthusiasm.

Here are three awkward moments at the AIPAC conference when a call for bipartisanship dissipated into cheers for Trump.

Israel’s ambassador wants you to know things are finally good.

Dermer paid lip service to bipartisanship – he name-checked multiple Republicans scheduled to address the conference, and the single Democrat he named was New Jersey Sen. Robert Menendez, whom he called a “true friend” of Israel.

Menendez, however, is something of an outlier among Democrats: He was one of only four Senate Democrats who sought to block the 2015 Iran nuclear deal reviled by Dermer. More recently he was one of only two Democrats who voted to confirm David Friedman as ambassador to Israel. Friedman, a longtime lawyer to Trump, had offended much of the Democratic caucus — and left-leaning Jewish groups — with broadsides against liberal Jews.

Dermer went on to praise Nikki Haley, the new ambassador to the United Nations, which was natural enough – in her short time on the job she has been an outspoken defender of Israel.

But he really wanted the crowd to know that things had changed.

“We’ll hear from a woman who has finally brought some moral clarity to the United Nations,” Dermer said. “Armed with that moral clarity we can finally get serious about the U.N.’s anti-Israel bias.”

And he wasn’t shy about praising Trump at his predecessor’s expense.

“Perhaps for the first time in many decades there is no daylight between our two governments,” Dermer said.

An Israeli Embassy tweet sent out as he was speaking said “years” rather than “decades” — perhaps wary that Dermer was referring as well to Obama’s predecessor pro-Israel favorite, GeorgeW. Bush.

Mike Pence is among friends.

Sunday evening’s session, in the cavernous Verizon Center, was launched with another encomium to bipartisanship, this time by Howard Kohr, AIPAC’s executive director.

“We’re here because we are the bipartisan voice needed in America to help keep Israel safe in a dangerous world,” Kohr said.

Pence’s speech, wrapping up the session, was a fierce paean to all things Trump, however, and he presumed that folks in the room agreed with his sympathies for the boss.

“Thanks to the support of so many in this room,  President Trump won a historic victory,” he said. “All of you helped elect a president I know will make America great again.”

Trump’s campaign slogan earned applause, although many in the hall refrained.

Benjamin Netanyahu likes a tight budget, except when it comes to Israel aid.

Monday morning’s session included a briefing by three top AIPAC staffers about the next day’s agenda for activist lobbyists. The staffers spoke of a three-item agenda: lobbying for new Iran sanctions, for an anti-boycott Israel bill – and not just for assistance to Israel, but for foreign aid in general.

“We will ask members to support a robust overall foreign aid budget,” said Brad Gordon, the director of policy and government affairs at AIPAC. Foreign aid is “a cost-effective method to ensure America’s leadership around the world.”

That’s a critical message for AIPAC, as Trump has proposed slashing the foreign assistance budget by nearly a third while leaving in place defense assistance for Israel — rising to $3.8 billion next year from its current $3.1 billion.

AIPAC has always made Israel and broader foreign assistance inseparable, in part because a robust U.S. presence abroad helps its ally, Israel, establish relationships with countries that might otherwise be wary.

But that message has also become sensitive in recent years as Republicans have distanced themselves from an embrace of foreign assistance — while carving out a place for Israel. Now, as Trump embodies that isolationist trend, the rubber is meeting the road.

So when Israeli Prime Minister Benjamin Netanyahu spoke just minutes later via video link from Israel, there may have been some wincing in the dark convention hall. Netanyahu praised Trump’s commitment to Israel.

“You see it in the budget request submitted by President Trump,” he said. “It leaves assistance for Israel fully funded, even as the fiscal belt is tightened, and we appreciate that.”