White House: Envoy’s ties to Israel are an ‘asset’ toward peace 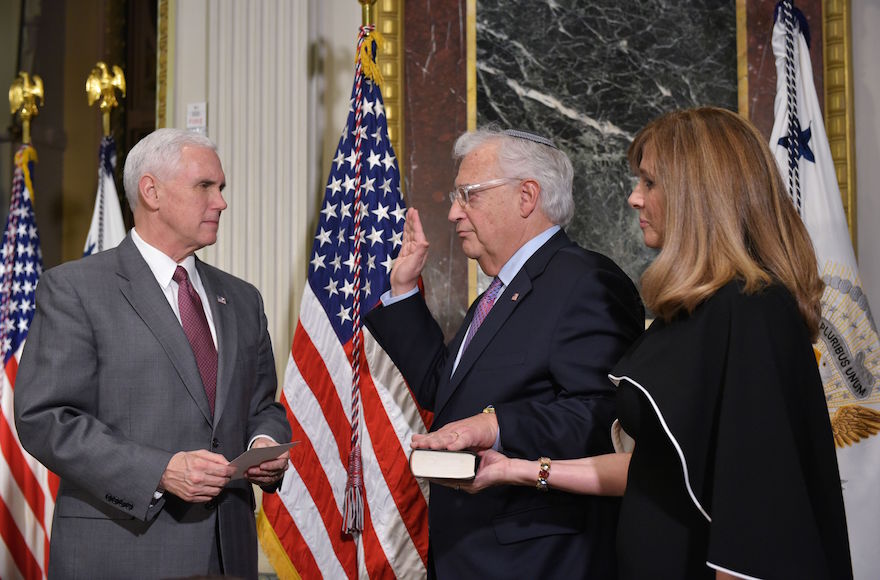 Vice President Pence, left, overseeing the swearing-in ceremony for David Friedman as the U.S. ambassador to Israel, as his wife Tammy Sand looks on, in the Indian Treaty Room of the Eisenhower Executive Office Building, next to the White House, March 29, 2017. (Mandel Ngan/AFP/Getty Images)
Advertisement

WASHINGTON (JTA) — David Friedman’s Israel connections, a factor that helped dampen Democratic support for President Donald Trump’s nominee as ambassador to Israel, will be a “tremendous asset” to advancing peace, the White House said on the day of his swearing in.

White House spokesman Sean Spicer told reporters on Wednesday that Trump “is glad that Ambassador Friedman will be officially on board as we strive for a lasting peace in the Middle East.”

“Mr. Friedman’s strong relationships in Israel will be a tremendous asset to the president in furthering that mission,” Spicer said.

Friedman, confirmed last week in a mostly party-line vote, had drawn opposition from Democratic senators, mostly because of his intemperate attacks on liberal Jews in the past – which he apologized for during hearings – but also because of his deep philanthropic investment in the settlement movement, and his ties with settler leaders.

Vice President Mike Pence swore Friedman in later the same day. Friedman, a longtime lawyer to Trump, used the Hebrew bible. He also used the phrase “solemnly affirm,” which is preferred by observant Jews at swearings-in to “solemnly swear.”

Rabbi Shmuley Boteach, like Friedman from New Jersey and close to leading Republicans, posted a photo on Twitter of Friedman holding up the bible.

At Ambassador David Friedman swearing in at White House pic.twitter.com/zlE77VDIXw

Friedman’s swearing-in came the same day that Trump’s envoy to the region, Jason Greenblatt – also a lawyer to trump when he was a businessman – wrapped up meetings with Arab leaders on the sidelines of an Arab League meeting in Jordan.

Summing up, the U.S. embassy in Amman said in a statement that Greenblatt “focused on how tangible progress could be made toward advancing Middle East peace, including a comprehensive agreement between Israelis and Palestinians.”

Greenblatt, in his meetings, “reaffirmed President Trump’s personal interest in achieving a peace deal between Israel and the Palestinians and his belief that such a peace agreement is not only possible, but would reverberate positively throughout the region and the world.”