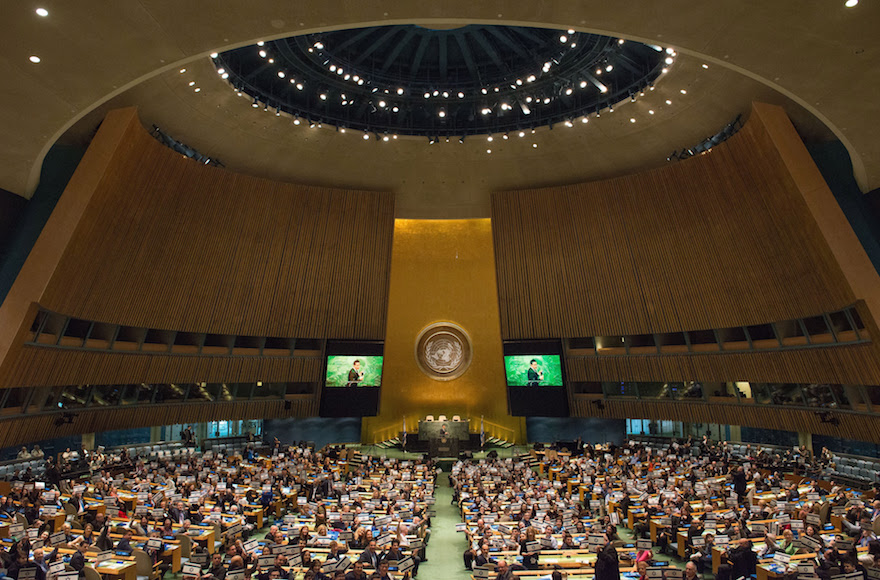 The conference on Wednesday, sponsored by the World Jewish Congress and Israel’s mission to the U.N., focused on ways to combat the movement to boycott, divest from and sanction Israel. Sessions concerned opposing BDS on campus, among private corporations, on social media and at the U.N. itself — a body Israel and the United States have accused of being biased against Israel.

The conference also included a note of controversy, as a state legislator appearing on one of the panels accused attendees representing J Street of belonging to an anti-Semitic group.

“The halls of the U.N. are now being infiltrated by the boycott movement,” he said. He called the blacklist effort “pure anti-Semitism” and said that “together with the U.S., our greatest ally, we will keep fighting until BDS is eliminated.”

Earlier this month, a U.N. affiliate published a report accusing Israel of apartheid. But the report was removed from the internet soon afterward due to objections from U.N. Secretary General Antonio Guterres.

During a question-and answer segment at the day’s final session, a Jewish student representing J Street U, the campus arm of the dovish pro-Israel lobby, asked how students can best oppose BDS on campus while also opposing Israel’s occupation of the West Bank. South Carolina State Rep. Alan Clemmons, a Republican who has spearheaded legislative efforts to oppose BDS, responded by calling J Street anti-Semitic and rejecting the idea that the West Bank is occupied. He called Israel’s control of the territory an “eternal inheritance and legal right.”

“We oppose BDS on all of our campuses, and we saw this as an opportunity to talk about how to best do that,” she said. “It empowers the fringe of the community, and that becomes the face of what we’re doing. We saw fringe voices being made the norm.”

Although Israel’s current government does not refer to the territories it controls beyond the 1949-1967 armistice lines as “occupied,” most of the international community, including the United States, does.

In an address closing the conference, Gidi Grinstein, president of the Reut Institute, said that in order to combat BDS, the Jewish community needs to welcome left-wing and right-wing pro-Israel views. His comments echoed a report Reut released this year in conjunction with the ADL that called for a bigger tent in fighting Israel boycotts.

“We have to be able to establish a unity of cause in spite of our diversity, and we have to be respectful to other opinions,” he said. “If we push each other out, there is zero chance of victory.”

In her speech to in the General Assembly hall, Nikki Haley, the U.S. ambassador to the U.N., said BDS efforts as well as anti-Israel activity at the U.N. “seek to deny Israel’s right to exist.” Haley has promised to use her position to defend Israel at the United Nations.

“They are both efforts to intimidate her friends and embolden her enemies,” she said. “They are both extensions of an ancient hatred. And how tragic is it that, of all the countries in the world to condemn for human rights violations, these voices choose to single out Israel.”

The halls of the @UN are now being infiltrated by BDS. The Human Rights Council is creating a blacklist of companies operating in Israel pic.twitter.com/7Beqxx3jTd