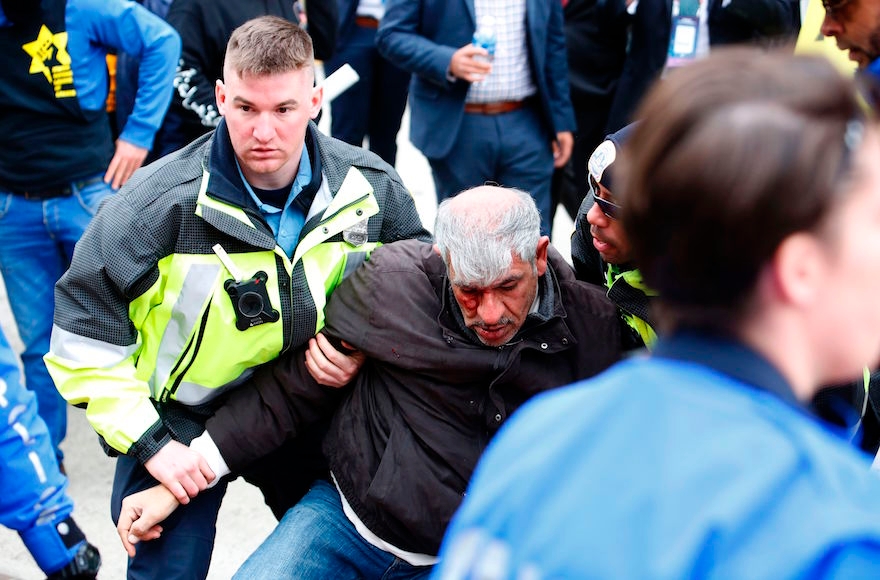 WASHINGTON (JTA) — Two men were charged with a hate crime for an assault on an Arab teacher allegedly carried out by members of the Jewish Defense League outside this week’s AIPAC conference in Washington, D.C.

The report released Thursday by the Metropolitan Police Department of the District of Columbia listed Kamal Nayfeh as the victim.

972 Magazine, which reported Thursday on the attack, said that Nayfeh, 55, is an instructor at Central Piedmont Community College in Charlotte. According to the North Carolina school’s website, Nayfeh has taught networking technology there for 16 years.

In both instances, “suspected hate crime” based on “anti-Arab” bias was added as “other felony involved.” Hate crimes, if added to a conviction, automatically increase penalties.

According to the police report, Nayfeh said he got into a “verbal altercation” with Steynovitz, who then punched Nayfeh “about the face area.” Nayfeh fell to the ground, according to the report, and Lubranicki kicked him in his side and hit him in the right eye with a wooden pole.

The JTA reached out through LinkedIn to Steynovitz and Lubranicki for comment on the charges; they did not reply.

In 2015, Lubranicki appeared on The Glazov Group, a conservative news channel on YouTube, as the founder of American Bikers United Against Jihad. He identified himself as an Israeli-born Jewish American.

Some 500 to 600 activists heeded a call by IfNotNow, the Jewish anti-establishment group, to protest this week’s American Israel Public Affairs Committee conference, which drew 18,000 attendees. Several dozen counterprotesters bearing T-shirts and flags identified with the Jewish Defense League also appeared, and there were several clashes between the two groups.

Meir Weinstein, who reportedly is the national director of the Canadian JDL, in a video released on Facebook said that individuals affiliated with the group acted only in self-defense. Weinstein alleged that videos of the incident were “selectively spliced.”

“We’re going to be releasing a lot more information to put everything into context,” he said.