‘Entourage’ star Adrian Grenier in Israel to sell Passover gifts, with a kippah and a smile 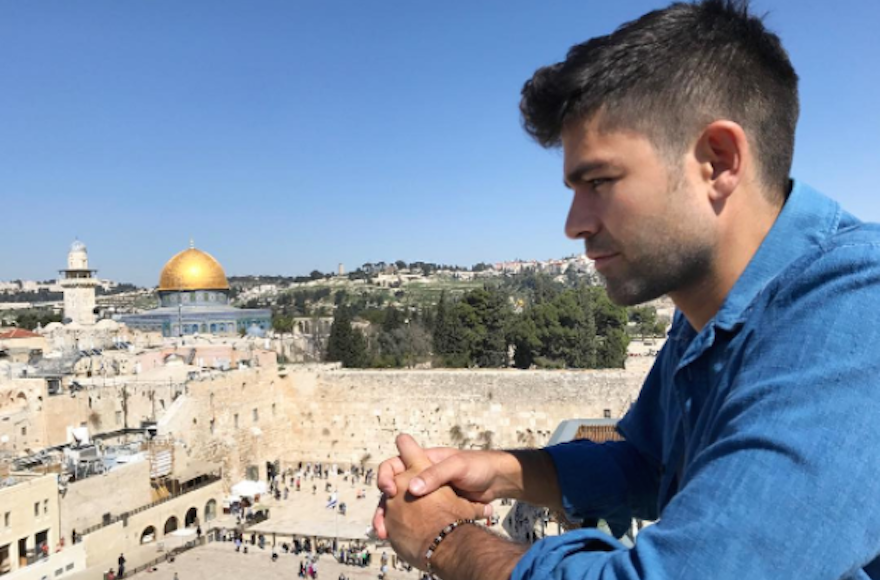 In a Passover commercial for an Israeli gift card company, the actor clips on a white satin yarmulke and nails the guttural pronunciation of the holiday’s Hebrew name, Pesach. He then proceeds to dispense terrible gifts — including a rock replica, an ashtray and an edible yo-yo — to grateful recipients.

“I’m Adrian Grenier, the most charming actor I know,” he informs the camera. “So charming that I’ve been able to give away crappy gifts.”

Warning viewers they are “no Adrien Grenier,” he suggests they take the safer route of purchasing gift cars from BuyMe, which reportedly paid him half a million shekels (about $140,000) to do the ad. More than just the Seder, Passover is a holiday for giving gift in Israel, accounting for about a 10 percent increase in national spending. It is also a popular time to travel.

Since “Entourage” wrapped in 2011, Grenier has appeared in the “Entourage” film and a number of smaller movies. He has also produced several documentaries and was involved in a variety of philanthropic projects. While in Israel to film the ad earlier this month, Grenier posed a photo of himself at the Western Wall on Instagram, writing: “Contemplating the infrastructure … of an ancient city in modern times, of a holy land, of history, of humanity.”

Contemplating the infrastructure…of an ancient city in modern times, of a holy land, of history, of humanity. #thewesternwall

In a video interview with Israel’s Yedioth Acharonot newspaper, he admits to not having visited the beach while in Tel Aviv. “Next time, I’ll have to come back,” he says. Grenier is not Jewish.

Last year, before Rosh Hashanah, another Israeli gift-giving holiday, Grenier’s Jewish “Entourage” costar Jeremy Piven did a similar ad campaign for BuyMe. In that ad, Piven was the one getting bad gifts and pretending to love them.

“I would rather be scraped with a rusty menorah … than own this piece of shit,” he says after receiving a fish-shaped plate. “But they don’t know that’s how I feel, because I’m an actor. Your friends and family are not.”

Yonatan Alon, the CEO of BuyMe, said in a statement that the company was “thrilled to collaborate with a huge Hollywood star once more,” adding: “After the wonderful Jeremy Piven, this time we decided to raise the bar and bring the charming Hollywood star Adrian Grenier.”