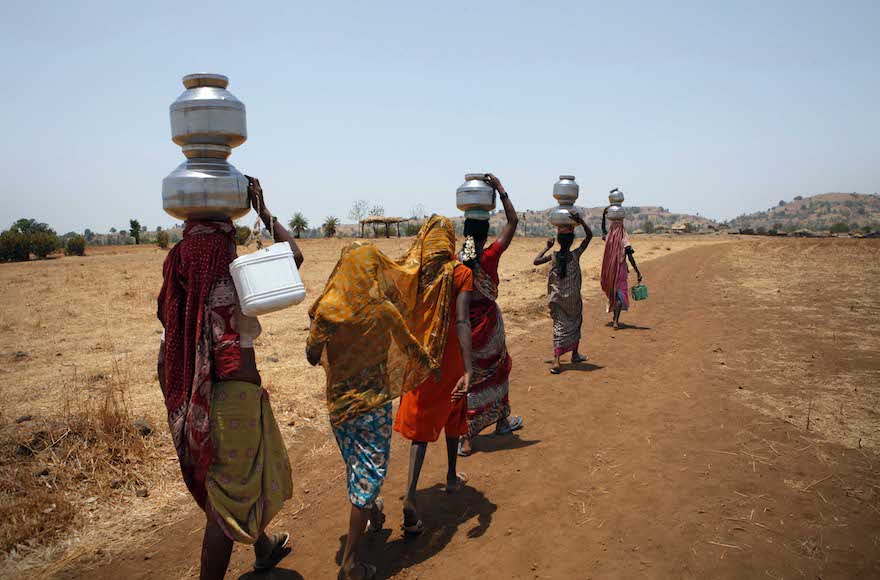 Women returning home after collecting water from a well in Dolhare, India, May 10, 2012. (Mahendra Parikh/Hindustan Times via Getty Images)
Advertisement

TEL AVIV (JTA) — An Israeli company whose technology made a splash at last week’s AIPAC conference has signed deals to produce drinking water — by extracting it from the air — in India and Vietnam, two countries that have long faced shortages.

Water Gen inked an agreement last week with India’s second largest solar company to produce purified water for remote villages in the country. Earlier, the company arranged with the Hanoi government to set up water generators in the Vietnamese capital.

“The government of Vietnam greatly esteems the technological developments in Israel, and I hope that the Israeli technology that we supply to Vietnam will significantly help to improve water conditions in the country,” Water Gen President Mikhael Mirilashvili said after the signing in Hanoi, according to a statement.

The memoranda of understanding are worth $150 million in total, according to Water Gen, which was founded in 2009 and creates technology that extracts water from the air for use by civilians and soldiers who do not have access to clean sources. 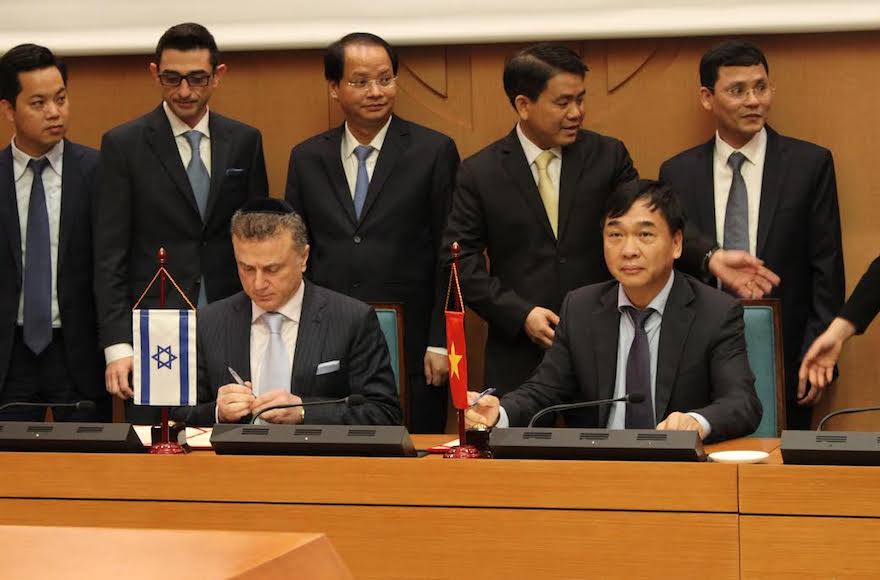 Harvard Law professor Alan Dershowitz demonstrated Water Gen’s technology on stage at the American Israel Public Affairs Committee’s annual policy conference in Washington, D.C., on March 26. He touted the device, which he said can produce 15-20 liters of drinkable water a day, as a weapon against worldwide water scarcity and the Boycott, Divestment and Sanctions movement against Israel.

“There is no weapon more powerful in the fight against BDS than for Israel to develop technologies that the world cannot live without,” he told the crowd. “You cannot boycott products that you can’t live without.”

About 1.2 billion people, nearly one-fifth of the world’s population, live in areas of water scarcity, according to the United Nations Department of Economic and Social Affairs. Of India’s 1.25 billion people, 75 million lack access to clean water, the Water Aid nonprofit found last year. And Vietnam has struggled to provide its population of 95 million with water because of contamination, poor infrastructure and heavy agricultural demand.

Water Gen devices use thin plastic leaves to condensed water from warm, humid air. The company says that its largest unit can produce 825 gallons of water per day for only 10 cents a gallon (mostly in energy costs).

In India, Water Gen is to deploy its technology to supply drinking water to remote villages in India with solar power from Vikar Solar. The Vietnam project is to generate tens of thousands of liters of water a day for the people of Hanoi. Water Gen also said in a statement that it plans to build a factory to produce technology for sale in the region.