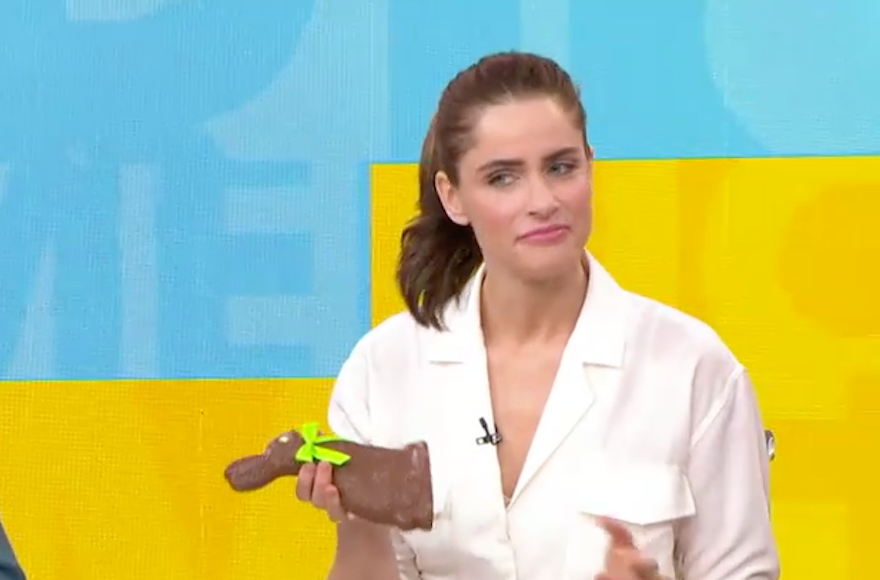 Actress Amanda Peet and actor Hank Azaria were guests on the show Wednesday and talked about their new IFC show “Brockmire,” which centers on a baseball announcer.

But before talking about the series, both were asked about how they like to eat their chocolate Easter bunnies. Host Michael Strahan supplied the chocolate treats as a segue into talking about a survey on how people eat food (do you eat the bunny ears first, or the feet?)

Things got a little uncomfortable — because both Peet and Azaria are Jewish.

“Guys I’m Jewish,” Peet said, prompting laughter from the hosts. “So this is really unfamiliar for me.”

“Would you like a chocolate menorah brought out?” Azaria said to lighten things up.

The group went on to talk about how people eat other things, like pizza and Oreos. When Azaria said he sometimes eats pizza with a knife and fork, some of the hosts called him out for being “not very New York.”

Azaria, who was raised in Queens, responded by saying “I can eat my pizza any freaking way I want” with a heavy New York accent (a la Jon Stewart).

A small debate broke out on Twitter over whether eating an Easter bunny is a quintessentially Christian activity.

Chocolate candy had nothing to do with religion. Trust me, I go to mass every Easter and have never been given candy there.

I'm atheist and I love me some Easter Bunnies. It's not about religion-it's about candy.

Peet, the star of many movies and shows, such as “Jack and Jill” and “Togetherness,” was born to a Jewish mother and Quaker father — and she’s now married to Jewish “Game of Thrones” writer David Benioff. In 2015, she co-wrote a children’s book about Hanukkah titled “Dear Santa, Love, Rachel Rosenstein.”

Azaria, best known for being the voice of dozens of characters on “The Simpsons,” was born to Sephardic Greek parents.

Next time, Michael Strahan might want to bring out a box of chocolate matzah.