The 5 (or so) habits of successful seder leaders 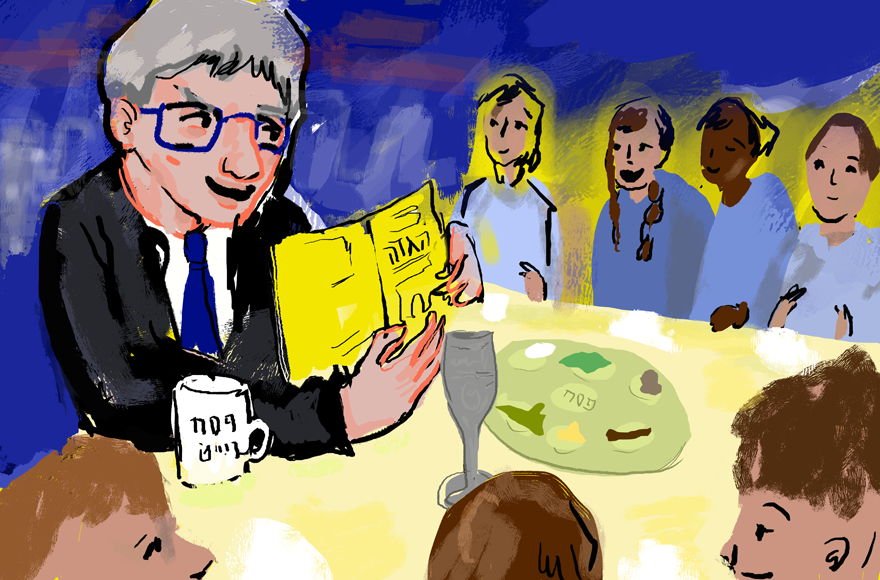 LOS ANGELES (JTA) — What kind of leadership style works best for a seder? During a period when we are experiencing a shake-up in national leadership, you may want to re-examine the relationship that exists between leader and participants at the Passover meal.

Though seder leaders and participants are not elected, there is still a seder mandate that governs your relationship: Everyone present — the wise, the wicked, the simple, and even the one who does not know how to ask a question — are all involved in the evening’s proceedings.

Attending a Passover seder remains an “extremely common practice” of American Jews, according to Pew Research Center, with approximately 70 percent participating. Despite its broad mandate, however, meaningful seders rarely function as true democracies. The seder is a complicated undertaking with symbolic foods, actions and storytelling, and on this night that is different from all others, the call is for an assertive leader who can guide a tableful of guests through a sea of ritual needs.

Since Passover is an eight-day holiday of freedom, and the seder a celebration of the going out from Egypt, you may think the people are clamoring for a democratic free-form kind of dinner — from chanting the kiddush to singing “Chad Gadya.” But after leading a family seder for over 30 years, my experience has been that if I give everyone a free hand to comment and question, and the seder runs long, revolution erupts, with the guests vigorously chanting “When do we eat?” And if I try to rule the table with an iron kiddush cup, my poll numbers plummet, especially among the restless, 20-something contingent, who start texting madly under the table, presumably plotting a resistance.

Defying typical political alignment, I have found that on the nights when the seder works — when most every question has been asked, and tradition and innovation have been shared — my style of leadership has fallen somewhere between being a benevolent dictator and a liberal talk show host.

I say “benevolent dictator” because it is part of the leader’s job to find a way for everyone to retell the Passover story and ultimately exit the slavery of Egypt — even though they may not necessarily feel the need. Going around the table urging guests to share the reading is one way, and calling up guests beforehand to discuss and assign a specific section of the seder is another. Especially for whoever is going to lead the Four Questions — at our table, usually the youngest who can read Hebrew — it helps to ask them personally beforehand rather than springing the task on them on the night of the seder. Such quiet lobbying helps reorient one from being an audience member into one, as the Haggadah says, who can see themselves as if they had left Egypt.

As “liberal talk show host,” I get that the Haggadah is filled with questions that must be questioned as well. I once opened a seder by asking, “What does it mean when the Haggadah says: ‘Let all those who are hungry come and eat with us?’” Especially in a year such as this one, where even benign conversation is abuzz with politics, there are going to be varying responses, from the bitter, like maror, to the sweet, like charoset.

At the time, you may not think that these opposing points of view are what binds a seder together, but recall that in the Haggadah, when the five rabbis are sitting in Bnei Brak telling and interpreting the story of the Exodus, each has something different to add, and it is the whole of their interpretations taken together that heightens our understanding of the text.

Those not leading but participating in the seder, don’t think that you are off the hook in setting its tone. In his book “Keeping Passover,” Ira Steingroot points out that being a seder guest “doesn’t mean that you have to be the life of the party or a maven (authority), and you certainly do not want to monopolize the conversation, but you have a role to play in the drama of the seder.” In fact, it is your responses and feelings that determine whether everyone at the table makes it past the plague of ennui. To aid in that quest, be sure you are following along, asking questions and responding to the leader’s prompts.

I have also learned that regardless of leadership style — some of us are like Moses pointing the way, others are more like Miriam, leading through interpretation and song — you will still need to do your homework. Whichever your style, Steingroot’s book is a great source, as well as “Passover: The Family Guide to Spiritual Celebration” by Dr. Ron Wolfson with Joel Lurie Grishaver, and “A Different Night, The Family Participation Haggadah,” by David Dishon and Noam Zion.

Taking my own advice, a few nights before our first encounter with all things matzah each year, I go through the Haggadah and annotate, searching for my afikomen: a way to connect the story of traveling from slavery to freedom to the lives of my guests. One year I held up a Passover chocolate bar and referred to it as “the bean of our affliction,” calling attention to the children who are sometimes exploited to harvest cacao beans and as a way to discuss if we, too, were participating in slavery.

This year to provoke discussion, before we open the door to Elijah, I plan on asking guests to imagine what would happen if the prophet, as we imagine him — a robed and perhaps turbaned man from the Middle East — was detained at airport customs?