It’s Jew vs. Jew as a conservative pol’s popularity rises in Rio 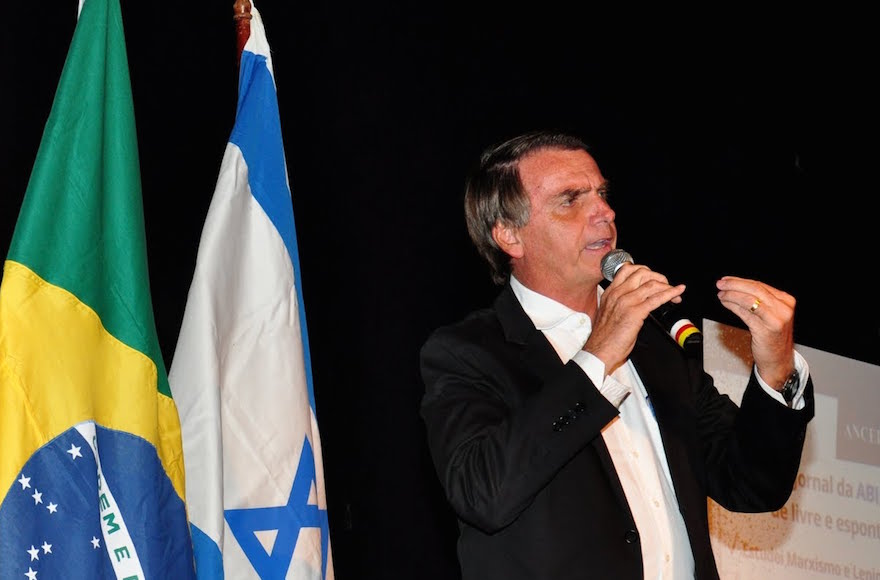 RIO DE JANEIRO (JTA) – A few days before they read from the Passover Haggadah about how God split the Red Sea waters, Brazilian Jews have never felt so split between right and left.

At the center of the divide, although hardly in the Moses role, is Jair Bolsonaro, a 61-year-old conservative lawmaker who appears to be as pro-Israel as he is anti-gay and pro-law and order.

Bolsonaro, a member of the Social Christian Party, is appealing to socially conservative voters even as he alienates the center and left with harsh anti-LGBT rhetoric.

Although not yet among the top candidates for president in 2018, his popularity is surging across the country, but mainly in Rio de Janeiro state, which he represents as a member of what some consider Brazil’s most conservative Congress in 40 years.

“My heart is green, yellow, blue and white,” Bolsonaro said to an audience of 400 at the Hebraica club in Rio on April 3 in a reference to the Israeli and Brazilian flags. He won big applause as he hailed the Jewish state for its power and social welfare system, saying it should inspire Latin America’s largest nation.

Meanwhile, outside the club, nearly 150 mostly Jewish activists — including many teens and 20-somethings wearing the blue uniform of the Hashomer Hatszair Jewish youth movement — protested Bolsonaro’s appearance. The crowd yelled “shameless Jews” and “fascist Jews” in unison at the club gate. Rio’s most establishment Jewish institution, Hebraica was founded in 1957 by Jewish refugees from Nazi Europe.

“It is deplorable that a Jewish youth movement such as Shomer, funded by Israel, offends other Jews with cursing and slurs,” Hebraica Rio president Luiz Mairovich told JTA. “It’s unacceptable. I have never seen that in my life: a Jew cursing another Jew. It was a case of anti-Semitism among Jews. We will listen to everyone. Those same people who booed today will clap tomorrow.” 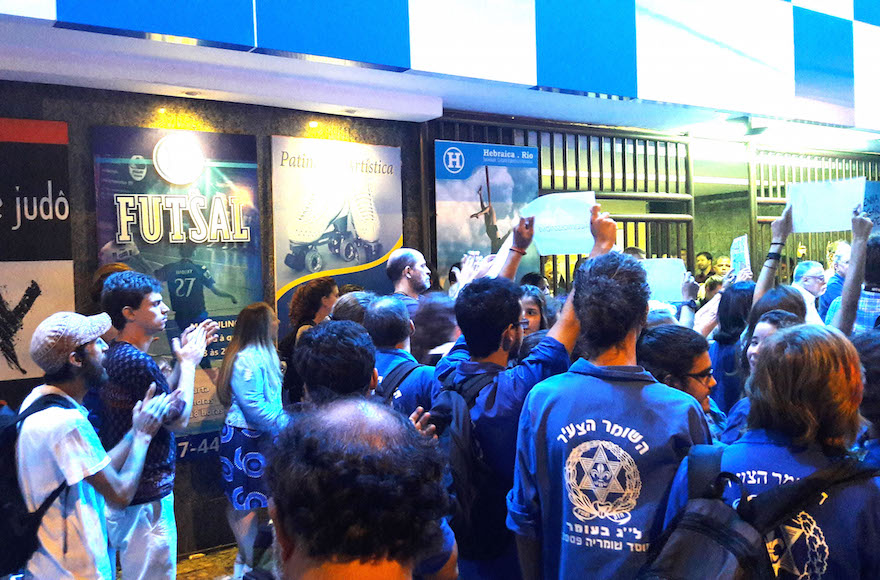 Jewish protesters outside an event featuring Jair Bolsonaro at the Hebraica club in Rio, April 3, 2017. (Hebraica)

Some protesters wore yellow Stars of David with words like “women” and “gay.” During a TV debate in 2003, Bolsonaro told a far-left congresswoman, Maria do Rosario, “I would never rape you because you don’t deserve it.” Critics have also accused Bolsonaro of homophobia and racism for his opposition to same-sex partnerships and quotas at universities.

“It is extreme levity to preach the use of yellow stars in a political event,” Israel’s honorary consul, Osias Wurman, told JTA. “It is the most stupid and fratricidal way to trivialize the Holocaust.

“We do not need enemies, we have them within our community. What a downfall! These sick-minded people have to be isolated from the healthy Zionist youth. They invade the memory of our 6 million innocents.”

The president of the Brazilian Israelite Confederation, the country’s umbrella Jewish organization, took a more neutral tone to the talk and the protests.

“The talk generated, as expected, division and confusion in the Jewish community,” Fernando Lottenberg said. “We support the political debate and believe it is always necessary even more at this moment of dramatic developments in national politics. However, we defend that it has criteria and be always guided by balance and pluralism. Our community has a great diversity of thought.”

Rabbi Nilton Bonder, an author and spiritual leader of Rio’s only Conservative synagogue, was critical of Bolsonaro’s speech, including his anti-immigration stances. (“We can’t open our doors to everyone,” Bolsonaro said during the Hebraica lecture.)

“Jews in Brazil have a history of immigration. To us, the loyalty to the immigrant is huge,” Bonder told O Globo newspaper. “I can’t think of a speech that is more contrary to the Jewish tradition of humanist values. It was tainted because some comments looked like they were an opinion from our community.”

The imbroglio with Bolsonaro started when he was disinvited last month from a speaking event at the Hebraica club in Sao Paulo after some 3,800 leftist activists signed an online petition.

Days later, the Rio club invited Bolsonaro; more than 33,000 online supporters had backed a petition welcoming him. Though the two clubs are both called Hebraica, they operate independently.

“These protests have a historic importance. This level of secession and dispute is unprecedented since the 1950s,” Michel Gherman, a historian and academic at the Hebrew University in Jerusalem and Rio de Janeiro Federal University, told JTA. “I don’t think it exceeded the limit of violence. It became aggressive at moments, but that’s part of the game.”

Last year, Gherman supported Marcelo Freixo, a human rights activist with the left-wing Socialism and Freedom party, or PSOL, in his unsuccessful bid for  Rio mayor. PSOL is known for its harsh anti-Israel platform and rhetoric. Some PSOL members accused Shimon Peres, Israel’s former president and prime minister, of genocide days after he died. In 2009, other militants burned the Israeli flag in a street protest.

“It is fundamental that the large society is aware that the Jewish community is pluralistic. But polarization is not healthy,” Gherman said. “We lack leadership to bring up a true debate. Today, it’s a tragedy.”

For Gherman, who has served as Hillel Rio coordinator and more recently Jewish culture coordinator of Eliezer Max, a community Jewish day school, the fact that Jewish youths who grew up in leftist youth movements have been fighting for their place in the Jewish community is something new.

Guilherme Cohen, one of the new young leaders, used milder terms than the protesters to evaluate the demonstration. Criticized himself for being affiliated with PSOL, he said the messages conveyed during the Monday protest went too far.

“In such a protest, excesses naturally happen,” he told JTA. “I don’t consider fascist everyone who listened to Bolsonaro. Calling everyone ‘shameless Jews’ was a mistake, but that was not bottom line, it was a protest against the invitation.

“It was positive to show that the Jewish community does not embrace a fascist, there is resistance — mainly among the youth,” added Cohen, who was assaulted by a Jewish official for carrying a Palestinian flag during a pro-Israel street demonstration years ago.

“In a democratic regime, protesting is the right action to the one who disagrees,” said Gomlevsky, a former president of the Rio Jewish federation.  “But if I had been there and someone had called me a Jew without shame, all hell would break loose. I do not accept this coming from a non-Jew, and definitely not from a Jew.”

“Shomer and [Habonim] Dror youth movements are linked to dying parties of the Israeli left, whose envoys receive high salaries to brainwash the children whose parents still value this type of proposal.”

Victor Grinbaum, founder of the influential 5,000-member ArtiSion online debate group, agrees that their leftist politics are out of step with the pro-Israel mainstream.

“The leftist movements are anachronistic remnants of an era that has been outdated for decades,” he said. “They had their importance in the early days of Israel and the Jewish community organization in Brazil, but today they are a mixture of summer camp with scouting, sprinkled with an ideological brainwashing that is similar to that practiced by the Hitler Youth.”

“On the other hand,” she told JTA, “youth movement members are citizens of their native country and are naturally entitled to have their own opinions on domestic and foreign policy issues. The choice is in their hands.”

As Gherman said, more and more Jewish youths have been showing interest in politics. For instance, they have been taking a growing number of seats at the biennial elections for the Rio Jewish federation’s board of advisers. Five young leftists were among the 36 board members in 2014. Two years later, following an overhaul that reduced the size of the board to 18, they held eight seats.

Jewish youths were also among those on hand at the Rio Hebraica to hear Bolsonaro, whom they refer to by the nickname “Bolsomito,” from the word myth or legend. With over 4 million Facebook followers, Bolsonaro was the top vote-getter among 46 congressman elected from the area in 2014 and won his sixth consecutive term in 24 years. His three sons, also politicians, have been photographed wearing T-shirts with messages in Hebrew.

At the upcoming Passover seder, Brazilian Jews will recite in Hebrew “Next year in Jerusalem.” For many that’s a reality, mainly for young singles and families who worry about limited job and career prospects under Brazil’s faltering economy. A record number of nearly 1,000 Jews are expected to make aliyah in 2017 following last year’s 700 emigrants and another 500 in 2015. Prior to that, the annual average had tended to be under 200.