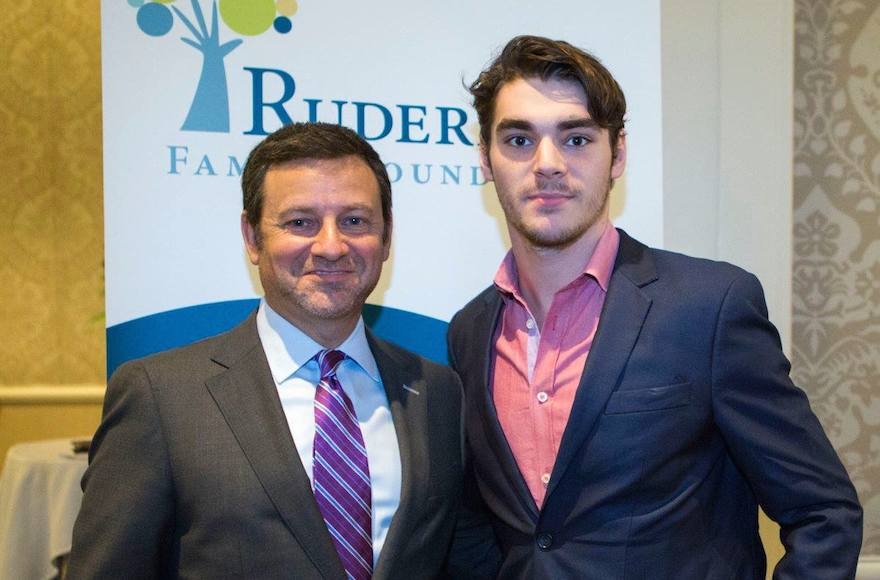 (JTA) — Until recently, the Ruderman Family Foundation helped pioneer an issue within the Jewish community — key word “within.”

While donating locally to Jewish causes from its base in Boston, it also fostered disability inclusion among Jewish and Israeli institutions.

It ran a Jewish Special Needs Funding Conference and offered grants and prizes to Jewish institutions that made themselves more accessible to those with disabilities.

But look for the word “Jewish” on the “inclusion” page of the Ruderman foundation’s website, it isn’t there. The past couple of years have seen the group expand its disability inclusion profile to target major industries and the media, not just worldwide Jewry.

“We’ve been doing a lot of work in the Jewish community, but it’s a tremendous amount of money to move the needle incrementally,” Jay Ruderman, president of the foundation, told JTA. “It’s $18,000 to put someone in a job” through a vocational training program. “We’re not going to change the world that way.”

Instead, Ruderman told JTA, the charity can have a broader impact by focusing on inclusion advocacy beyond the Jewish world. Donations to Jewish disability inclusion programs, he said, were inefficient.

The foundation was founded in 2002 by Ruderman, an attorney and Jewish communal professional whose father, the philanthropist Morton Ruderman, launched the medical technology company Meditech. It still funds Jewish disability programs, local Boston causes and efforts to educate Israelis about U.S. Jewry. Its U.S. grantees include organizations like Camp Ramah and Friendship Circle. As part of its efforts to educate Israelis about American Jewry, the foundation brings Knesset members to tour the U.S. and funds a master’s degree in U.S. Jewry at Haifa University. Jay Ruderman says the vast majority of the foundation’s money still goes to Jewish programs.

In the past, Ruderman said the foundation centered its inclusion work on housing, education and job training for Jews with disabilities. But now it’s also focusing on Hollywood, the media, and local and national government. An increase in funding has followed: While the foundation gave out $7 million to $8 million in 2016, it has upped the amount to $10 million this year, and in recent years has hired four staffers focused on advocacy.

“I hate to put it in these terms, but if you can put a couple hundred people into a school or put a couple hundred people into a job as compared to getting dozens of businesses to think differently [as] to hiring people with disabilities, or Hollywood getting more people with disabilities in roles and changing attitudes, I think that’s a greater social impact,” he said. “To me that’s so much more exciting than going through the intricacies and incremental process of getting someone a job or a house.”

Ruderman’s white paper on TV actors with disabilities found that while about 20 percent of Americans have a disability, only 1 percent of TV characters do. And of those characters, 95 percent are played by able-bodied actors.

To drive home this point, Ruderman has enlisted prominent actors with disabilities. Danny Woodburn, a little person and actor who played Kramer’s friend Mickey on “Seinfeld,” co-authored the report. R.J. Mitte, an actor with cerebral palsy who played Walter Jr. on “Breaking Bad,” has also appeared at Ruderman events.

“If you had a movie script and you took a white actor and you painted them black, there would be a huge outcry,” Ruderman said. “Yet there’s still a belief if you are an able-bodied actor who plays a person with a disability, it’s an Oscar-potential role for you.”

Ruderman also says the foundation has targeted its funding to more precisely serve its goals. While the foundation used to give unrestricted funding to Jewish organizations that might focus on areas Ruderman doesn’t address, now Ruderman’s unrestricted Jewish funding is minimal — less than 1 percent of its grants.

“We’re not giving unrestricted funding,” he said. “We’re building programs. I’m not turning to federations or to the Joint [Distribution Committee] or any other organization and saying, ‘I want to engage in social activism and I’m going to do it through you.’”

The foundation has also issued statements condemning when public figures mock or are insensitive toward disability. It called on current Israeli Defense Minister Avigdor Liberman to apologize when he called supporters of a two-state solution “autistic” in 2015 (he did). And it offered sensitivity training to President Donald Trump when he appeared to mock a disabled reporter on the campaign trail (Trump denies he was mocking the reporter’s disability).

Ruderman says more philanthropists should follow the foundation’s lead in using their bully pulpit to advocate for issues. Given the power large donors hold in the Jewish community, Ruderman feels philanthropists have a duty to speak to and engage with its grantees’ constituents.

“I see many many foundations shy away from advocacy because they have an adversity to being in the public in a way that will engender criticism,” he said. “Philanthropists have the bully pulpit. They should be doing their own advocacy. They are significant enough in terms of their wealth and business background to be able to make very powerful statements and to be able to back that up. And I see very few willing to do that.”