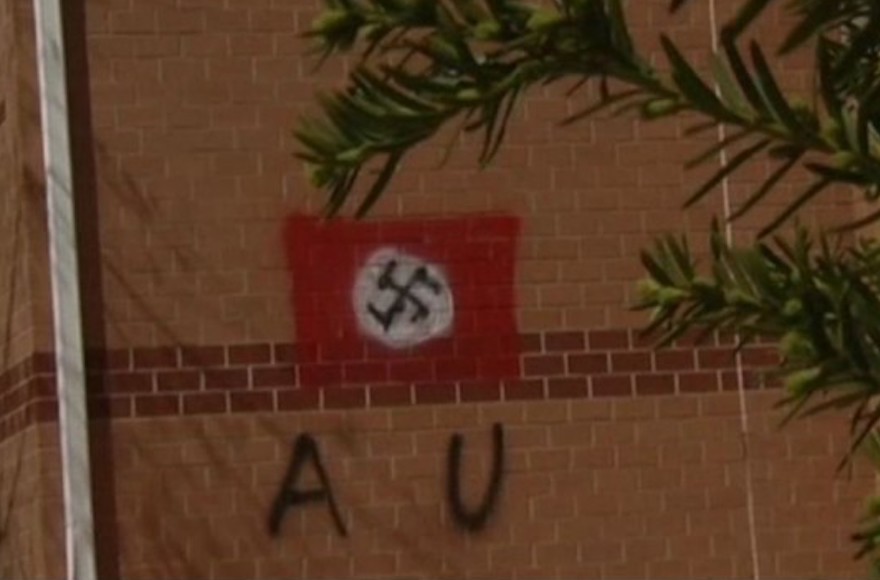 (JTA) — Police in Fairfax, Virginia, have arrested and charged a suspect for spray-painting anti-Semitic graffiti on the city’s Jewish community center and a nearby church.

Dylan Mahone, 20, was arrested Wednesday at his home based on surveillance video of the incidents, which occurred the previous day, according to a statement by the Fairfax County Police Department. He is also accused of posting anti-Semitic fliers on campus at the Northern Virginia Community College in March.

Mahone has been detained and charged with two counts each of felony destruction of property, placing a swastika on religious property with the intent to intimidate and wearing a mask in public to conceal one’s identity. The college’s police have charged Mahone with similar crimes.

“Hitler was right,” swastikas and the SS symbol were found spray-painted on the exterior of the JCC building. In addition, “Defend America; No Muslims,” was spray-painted across the church door. “Jesus knows no traitors” was written over the church’s Holy Week schedule, and a sign that read “Say NO to anti-Muslim bigotry” was crossed out.

Jeff Dannick, the JCC’s director general, said earlier this week that it was upsetting to have his community targeted on Passover but that the holiday, which recalls the biblical story of Jewish emancipation from slavery in Egypt, held relevant lessons.

“We retell that story generation to generation every year so that we never forget,” he told the Washington Post on Tuesday. “It’s a painful reminder of how ugly and dangerous the world can be, but also how we can overcome it.”