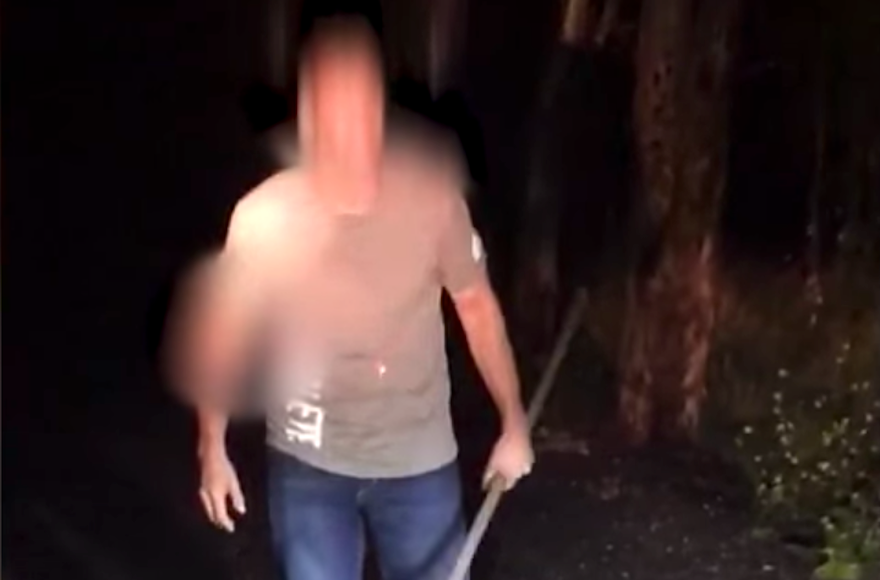 Video of Israeli police tasering a man they said was an American who confronted them near Almagor moshav in northern Israel, April 13, 2017. (Screenshot from YouTube)
Advertisement

JERUSALEM (JTA) — Israeli police used a stun gun on an American citizen after he attacked a security guard at the entrance to a moshav in northern Israel.

The unidentified man, 31, who police described as being “detached from reality,” reportedly had been in Israel for two weeks with his wife and son. He was arrested and held by police after the incident late on Thursday night, which was first reported by Israel media on Sunday.

He reportedly attacked a guard at the entrance to the Almagor moshav near the Sea of Galilee before fleeing to the forest nearby. He held police at bay with a long metal rod, while repeatedly shouting “fire.” Officers fired a stun gun at the man, who fell to the ground but then recovered. He was then physically subdued by several police officers.

The incident was captured on police video and released Sunday by Israel Police. The man’s wife told investigators the he told her Jesus had revealed himself to him and told him to destroy the family’s credit cards and go north.

A judge in the Nazareth Magistrate’s Court on Friday ordered the man held until Tuesday.