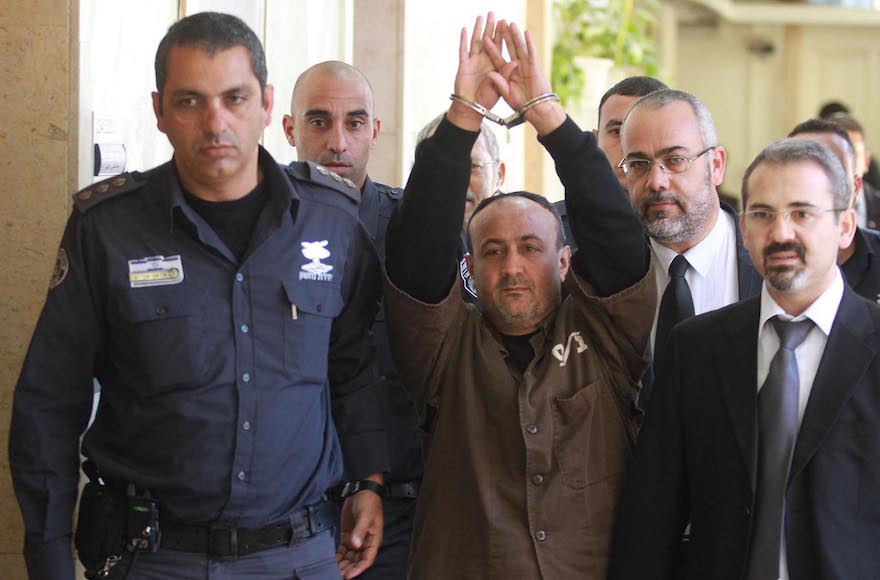 JERUSALEM (JTA) — Israeli officials and U.S. Jewish groups blasted The New York Times for publishing an Op-Ed by Palestinian leader Marwan Barghouti and not indicating that he is serving five life terms for the murder of Israelis.

Barghouti, whose Op-Ed published Sunday under the title “Why We Are on Hunger Strike in Israel’s Prisons” marked the beginning Monday of a hunger strike by hundreds of Palestinians jailed in Israel seeking more favorable conditions, was identified at the end of his article simply as “a Palestinian leader and parliamentarian.”

Nearly a day later, an editor’s was added, saying: “This article explained the writer’s prison sentence but neglected to provide sufficient context by stating the offenses of which he was convicted. They were five counts of murder and membership in a terrorist organization. Mr. Barghouti declined to offer a defense at his trial and refused to recognize the Israeli court’s jurisdiction and legitimacy.”

Israeli Prime Minister Benjamin Netanyahu mentioned the Op-Ed during an appearance in Dimona in southern Israel on Tuesday morning.

“I read, on Sunday, the article in the New York Times that presents arch-terrorist Marwan Barghouti as a ‘parliamentarian and leader.’ The paper recanted after we pointed it out to them. Calling Barghouti a ‘political leader’ is like calling Assad a ‘pediatrician.’ They are murderers and terrorists. We will never lose our sense of clarity because we are on the side of justice and they are on the side that is neither just nor moral,” he said.

Assad is an ophthalmologist, not a pediatrician.

“Barghouti is not a prisoner. He is a convicted murderer and a terrorist. The New York Times has provided a platform to a terrorist without noting the fact that he planned and carried out the cold blooded murder of Jews  simply for having been Jews. This is not a matter of freedom of speech. It is anarchy,” Deputy Foreign Minister Tzipi Hotovely said in a statement. “When a major newspaper with a reputation for responsible journalism becomes a platform for murderers,  it provides legitimacy for terrorism. This is a very disappointing decision by the editors which seriously undermines the credibility of the New York Times.”

It is not known how the Op-Ed got to the newspaper, with some suggesting that Barghouti’s wife smuggled it out during a prison visit. Following publication of the article, Barghouti was moved to a different prison and placed in solitary confinement.

Michael Oren, a former Israeli ambassador to Washington, called the Op-Ed “a journalistic terror attack, during an interview Monday with Army Radio. Oren, who is a lawmaker for the Kulanu Party and a deputy minister, said that Israel should take action against the newspaper. He also pointed out that the article was published in the Times on a Jewish holiday, which meant that the Israeli government could not respond to the article in real time.

“Marwan Barghouti was convicted for murdering Israeli civilians,” the Coordinator for Government Activities in the Territories, or COGAT, which manages day-to-day relations between the Israeli military and Palestinians in the West Bank and Gaza, wrote on Twitter.

In a recent OpEd piece @nytimes failed to report that Marwan Barghouti was convicted for murdering Israeli civilians https://t.co/FT7Iu1wemu pic.twitter.com/CxhyRtABPu

“@nytimes must have forgotten to mention that Marwan Barghouti is a convicted terrorist, responsible for the murder of innocent civilians,” the American Jewish Committee tweeted.

.@nytimes must have forgotten to mention that Marwan Barghouti is a convicted terrorist, responsible for the murder of innocent civilians pic.twitter.com/QZBOSNbTxP

Israeli lawmaker Yair Lapid, head of the Yesh Atid party, said in an article in The Times of Israel that the Times’ initial decision not to mention Barghouti’s convictions “isn’t an error, that is an intentional deception.”

“Anyone who reads the column without prior knowledge of the facts will come to the conclusion that Barghouti is a freedom fighter imprisoned for his views. Nothing is further from the truth. The missing part of the column is that Marwan Barghouti is a murderer. He was convicted in a civilian (not military) court on five separate counts of murder of innocent civilians. He was involved in dozens of attempted terror attacks. He caused people to lose their families and led to people being maimed. He destroyed lives.”