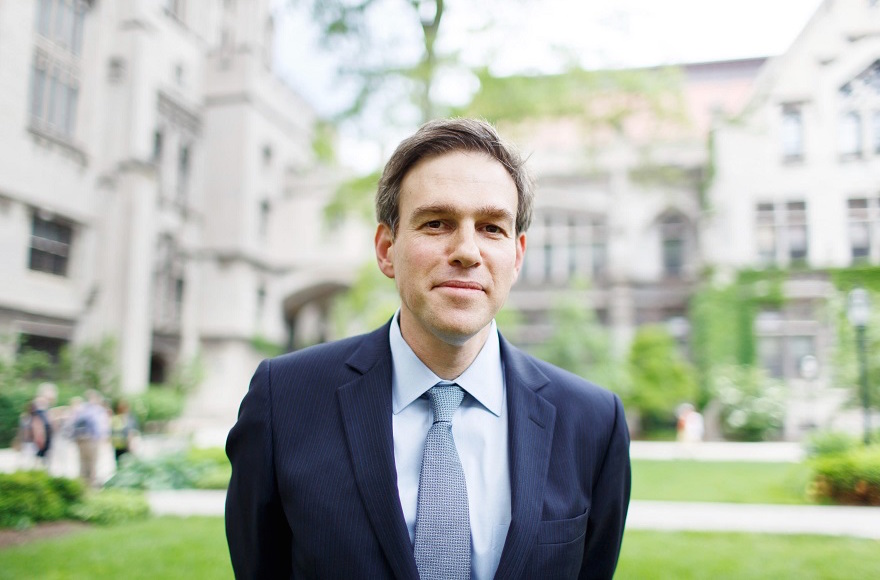 NEW YORK (JTA) — At first glance, The New York Times’ hiring of another white, Jewish male opinion-page columnist is anything but news.

But the arrival of Bret Stephens, formerly the foreign affairs columnist for The Wall Street Journal, may be especially resonant for American Jews. Stephens, 43, is the former editor of The Jerusalem Post, a Pulitzer Prize laureate, and an assertive defender of Israel and its current government’s policies. He, along with several other Jewish conservatives, has also been one of the loudest critics of President Donald Trump on the right.

“He’s a beautiful writer who ranges across politics, international affairs, culture and business, and, for The Times, he will bring a new perspective to bear on the news,” said an April 12 statement from the Times, whose op-ed roster already includes Jewish writers Thomas Friedman, David Brooks, Paul Krugman and Roger Cohen.

Stephens has also drawn criticism for his statements about the Arab world and for columns seeming to deny human-caused climate change. Here are four things you need to know about the Times’ latest addition to its op-ed stable.

Stephens took the helm of The Jerusalem Post at age 28.

Stephens was raised in Mexico City and educated at the University of Chicago and the London School of Economics. He began his career at The Wall Street Journal, but moved to Israel at age 28 to become editor-in-chief of The Jerusalem Post in 2002 during a tumultuous time. He led the Post through the worst years of the second intifada, pointed it in a neoconservative direction (as opposed to what the Post’s then owner, Conrad Black, called the “Jabotinskyan inflexibility” of one of Stephens’ predecessors, David Bar-Ilan) and wrestled with conflicts between the paper and its management.

A news brief announcing the decision in Haaretz, a rival publication, reported that Stephens’ hiring “triggered speculation and some unease” because Stephens wasn’t Israeli. But in his new role, says veteran Post political reporter Gil Hoffman, Stephens was a quick study.

“He has a presence well beyond his years,” Hoffman told JTA. “He’s absolutely brilliant. Bret came in and learned so much, so quickly.”

In 2004, Stephens explained at an event held by the UJA-Federation of Greater Toronto that he moved on from the Journal because he believed Israel was getting an unfair hearing in the press.

“One of the reasons I left The Wall Street Journal for the Post was because I felt the Western media was getting the story wrong,” Stephens said. “I do not think Israel is the aggressor here. Insofar as getting the story right helps Israel, I guess you could say I’m trying to help Israel.”

At the event, he also praised Likud Prime Minister Ariel Sharon for “uniting the country behind him.” In 2003, the Post named the then-U.S. deputy secretary of defense, Paul Wolfowitz — an architect of the Iraq War — its Man of the Year. And in a 2002 column, Stephens wrote that Europe’s “capitulation” to Muslim anti-Semites was comparable to Vichy France, the French puppet state controlled by Nazi Germany.

One of Stephens’ biggest challenges as editor, said Hoffman, was standing up to management that wanted to cut costs and staff. When the paper’s publisher, Thomas Rose, was fired in 2004 by Hollinger International, Black’s former media company, Stephens sent a celebratory memo to the paper’s staff, according to the Observer.

“For those of us who have seen up close the damage Tom did to this newspaper, this is a happy event indeed,” Stephens wrote in the memo. “For those Tom damaged personally, with his abusive behavior and bizarre management style, it is happier still. So good riddance, Tom, good riddance. You will not be missed.”

Rose sued Stephens for defamation based on the memo, but the suit was dismissed.

Stephens’ right-leaning pro-Israel bona fides may come as a relief to frequent critics of the Times’ Israel coverage. Shortly after his hiring was announced, for instance, the newspaper admitted it erred in publishing an opinion piece written by jailed Palestinian leader Marwan Barghouti for not noting that he is serving a prison sentence in Israel for murder and terror convictions.

He won the Pulitzer Prize for Commentary in 2013.

Stephens left the Post in 2004 and returned to the Journal, where he later began writing the Global View column on foreign affairs. Stephens wrote from a conservative perspective, covering regions from South Asia to Russia to China, and addressing topics like safeguarding democracy, defending Israel and preserving America’s leading role in foreign affairs. He has been critical of the international effort to combat global warming.

Stephens was a consistent critic of President Barack Obama, whom he charged with abdicating America’s responsibility to lead the international community. He won the Pulitzer “for his incisive columns on American foreign policy and domestic politics, often enlivened by a contrarian twist.”

“After World War II the U.S. created a global system of security alliances to prevent the kind of foreign policy freelancing that is again becoming rampant in the Middle East,” he wrote in 2013. “It worked until President Obama decided in his wisdom to throw it away.”

But Stephens hasn’t shied away from criticizing Republicans, both during the Obama era and afterward. In 2012, he wrote a column headlined “The GOP Deserves to Lose” because of what he called its field of weak candidates.

His reporting from around the world included a 2006 award from the South Asian Journalists Association for his “outstanding coverage” of the previous year’s earthquake in Kashmir.

“I challenge you to name another columnist in this country that can pack that many insights and ideas, week to week, into 800 words,” said Bari Weiss, a Journal book review editor (and former news and politics editor of the Jewish magazine Tablet) who was also just hired by the Times’ opinion desk. “Bret is deeply driven by principle, and even if the party that once reflected his principles shifts, he’s unafraid to stick to the principles rather than the party.”

He’s been an outspoken critic of President Trump.

The past couple of years have seen Stephens turn against the Republicans’ standard-bearer with abandon. Stephens has compared Trump to the Italian fascist dictator Benito Mussolini. He has called Trump an “unreliable narrator” and “a man who embarrasses — or terrifies — much of the free world.”

“Mr. Trump’s genius for tearing things down will not be matched by an ability to build things up,” Stephens wrote on Jan. 16. “Half-valid points will not be made whole. In the bonfire of discarded truisms and broken institutions will lie more than the failure of one man’s presidency.”

In criticizing Trump even after his electoral victory, Stephens joins other leading Jewish conservative voices, including Brooks, Jennifer Rubin and William Kristol.

He’s been accused of denying climate science and criticized for saying anti-Semitism infects “the Arab mind.”

Not everyone is happy about Stephens’ move to the Times. Several journalists and liberal commentators — including from the Times itself — have called out Stephens for positions he’s taken on global warming and anti-Semitism in the Arab world, to name a few. Media Matters for America, a left-wing press watchdog, called him “a serial misinformer.”

After an Egyptian competitor refused to shake the hand of his Israeli opponent at a judo match during the 2016 Olympics, Stephens wrote that anti-Semitism is the “disease of the Arab mind” and “the short answer for why the Arab world is sliding into the abyss.”

Declan Walsh, the Times’ Cairo bureau chief, tweeted that the statement was “not cool” and that “ascribing a pathological condition to an entire race of people is not” fair. Max Fisher, who writes on international affairs for the Times, also tweeted that “I guess we just all have to agree to disagree as to whether it is acceptable or correct to call racial groups pathologically ‘diseased.’”

Stephens tweeted back to Walsh, “The column is about the tragic ubiquity of anti-Semitism in the Arab world. Which, I’m sure you’ll agree, isn’t cool.” He called Fisher’s reading “tendentious.”

Stephens has also appeared to reject or minimize the scientific consensus that human activity is causing global warming on an unprecedented scale. He called global warming an “imaginary enemy” in 2015. Six years earlier, he wrote of those who prioritize global warming, “their intellectual methods are instructively similar” to those of Stalinists.

In a statement last week to the Huffington Post, Stephens said he does not deny climate science.

“Is the earth warming?” Stephens’ statement said. “That’s what the weight of scientific evidence indicates. Is it at least partially, and probably largely, a result of man-made carbon emissions? Again, that seems to be the case. Am I ‘anti-science’? Hell, no.”