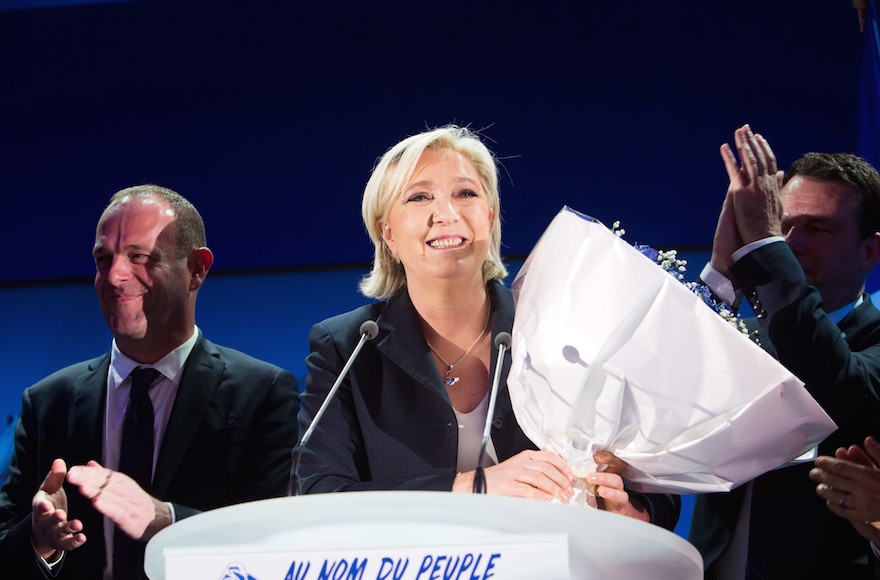 (JTA) — Leaders of French Jewry had mixed reactions to the success of Marine Le Pen and Emmanuel Macron in the first round of the French presidential elections.

“Satisfaction and concern,” Francis Kalifat, president of the CRIF umbrella group of French Jewish communities, wrote Sunday on Twitter after exit polls showed that Macron, a centrist independent, won the first round with 23.8 percent of the vote, followed by Le Pen, the far-right leader of the National Front, with 21.7 percent.

Kalifat has called Le Pen, who will run against Macron in the final round on May 7, a “candidate of hate.” He called on voters to elect Macron regardless of their opinion of his policies just to make sure Le Pen does not become president. The pattern, known in France as a “republican front,” has been used to keep the National Front out of power.

Such a vote is “indispensable” in the second round, Kalifat wrote.

Kalifat said he was “worried to see National Front making it to the main event of French democracy,” but “satisfied to see a republican in the lead” — a term that means a person who is attached to the French nation’s founding values.

National Front won the first presidential round in France only once before in 2002, with 18 percent of the vote, and was soundly defeated in the second round.

National Front has made considerable electoral gains since Le Pen became its leader in 2011, succeeding her father, Jean-Marie Le Pen, a Holocaust revisionist and openly anti-Semitic nationalist. The party advocates pulling out of the European Union, stopping immigration from Muslim countries and imposing limitations on religious freedoms, as well as harsh punishments for violence and incitement.

Marine Le Pen kicked out her father from the party in 2015 following his conviction for inciting racial hatred against Jews. (He suggested a Jewish singer critical of the party be “put in the oven.”) She has ejected several party members for anti-Semitic rhetoric.

Earlier this month, however, she said France was not responsible for its authorities’ rounding-up of Jews for the Nazis.

Marine Le Pen recently called for banning the wearing of the kippah in public and making it illegal for French nationals to also have an Israeli passport — steps she said were necessary because of the principle of equality in order to facilitate similar limitations on Muslims.

Le Pen has said radical Islam is a “threat on French culture” and has called on Jews to make certain “sacrifices” in order to fight jihadism.

Macron, 39, is a former banker who is 18 years younger than the average age of past presidents in France.

Fears over growing radicalization in society and recent upsets within the political establishment have made Macron the best bet among centrists, including many Jews.

Macron has never held elected office, but served as a Cabinet minister under Francois Hollande, a Socialist. He also served as a senior finance official under Nicolas Sarkozy of the Republicans.

Macron’s good looks, profound understanding of the economy, social media skills and unassuming style have helped his campaign despite the fact that no independent candidate has been elected president in France in decades. He has won over many voters with concerns over radical Islam by vowing to act tough whenever it conflicts with French laws — but has courted liberals by promising not to harass Muslims who abide by those laws.

He also supports closer cooperation with Germany and a deepening of France’s role in the European Union.