(JTA) — Supporters of Emmanuel Macron were not alone in cheering his victory Sunday in the first round of France’s presidential elections.

Far-right candidate Marine Le Pen, who finished second in the voting, saw it as excellent news. The two will face off in the final round next month after the centrist Macron won 23 percent of the vote, 2 points ahead of Le Pen.

She has called Macron her “ideal” adversary — Macron is relatively inexperienced and without the infrastructure of an established party, and despite running as an independent is nonetheless widely seen as a continuity candidate of the deeply unpopular government of President Francois Hollande.

“A runoff between a patriot such as myself and a caricature of a diehard globalist like him is ideal,” Le Pen, the leader of the Eurosceptic and anti-establishment National Front party, told the AFP news agency on Jan. 17. “It’s a gift.“

To be sure, the sharp-tongued and gravel-voiced Le Pen has also spoken dismissively of other candidates.

But when it comes to Macron, she is not alone in assessing his perceived weaknesses as a candidate. Nor is she alone in believing  that her anti-Muslim party, with its rich record of anti-Semitism, raw nationalism and xenophobia, is closer to the presidency than at any point in its history.

Macron, 39, a youthful-looking former banker who has never held elected office, has generated a huge following among professionals in France’s more affluent cities and regions. A supporter of corporate tax cuts and competitiveness in the job market, he has appealed to voters with a cosmopolitan worldview. He backs the European Union and promotes tolerance toward minorities while acting against radicalization.

But these very characteristics, as well as Macron’s image as an aloof wunderkind who owes his success to a corrupt establishment, make him deeply unpopular to a class, largely low-income, that feels disenfranchised by immigration, globalization and the European Union. Politically this is a perilous position, as witnessed in the 2016 vote in Britain to leave the European bloc and Donald Trump’s election in the United States.

Conservative writer Guy Millière is a Trump supporter who opposes Le Pen, but says Macron is an “inflatable doll” who, if elected, will guarantee “five more years of Hollande” and a continuation of the rule of a “clique that knows nothing about the difficulties of ordinary Frenchmen,” he wrote Monday on the rightist news site Dreuz. “He’s a candidate made up by billionaires.”

Macron’s supporters say that although he served two years as a Cabinet minister under Hollande, a Socialist, Macron is in fact an outsider to the political establishment and the only candidate who stands a chance to transcend bipartisan divisions in a deeply polarized society. Macron also was inspector of finances in the French Ministry of Economy under Jaques Chirac, a center-right president.

Yet that, too, could be an Achilles heel in a country where no independent candidate has won a presidential election since the 1970s.

Relatively inexperienced in politics and lacking the support of established party mechanisms, Macron is now up against one of France’s shrewdest and most seasoned politicians in Le Pen, a career lawmaker who heads one of her country’s most dynamic and hierarchical parties, and whose life partner and father both have devoted their adult lives to politics. 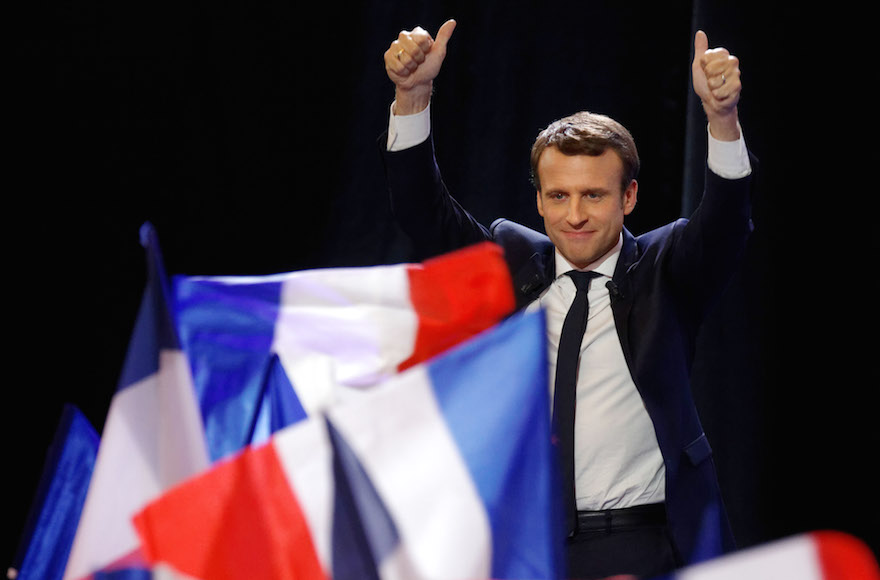 Emmanuel Macron speaking in Paris after advancing to the final round of France’s presidential election, April 23, 2017. (Sylvain Lefevre/Getty Images)

Le Pen’s family legacy, however, may play in Macron’s favor.

The daughter of National Front founder Jean-Marie Le Pen, a Holocaust denier and open anti-Semite who she succeeded as party leader in 2011, she and her party are widely regarded as extremist and borderline neo-fascist despite her efforts to rehabilitate its image.

Francis Kalifat, the president of the CRIF umbrella group of French Jewish communities, has called Le Pen “a candidate of hate.” On Sunday, he called on voters to vote for Macron in the second round, just to keep Le Pen out of power.

Known in France as a “republican front,” such mobilizations, in which voters set aside their differences and vote for the candidate likeliest to keep National Front out of power, have cost the party many elections. In 2002, the only time National Front participated in the second round of a presidential elections, the republican front resulted in Chirac beating Jean-Marie Le Pen with 82 percent of the vote.

Since then, Marine Le Pen has kicked out of the party dozens of members who were caught making anti-Semitic statements – including her father in 2015 after he said a Jewish singer should be put “in an oven.”

But in a remark that critics said echoed her father’s revisionism, she earlier this month said France was not responsible for how its police rounded up Jewish Holocaust victims for the Nazis.

Marine Le Pen has also vowed to outlaw the wearing of the kippah in public, explaining she does not regard it as a threat but will ban it nonetheless to facilitate imposing similar limitations on headgear worn by Muslims, whom she flagged as a “threat to French culture.”

Kalifat said she was a “threat to French democracy” and Moshe Kantor, the president of the European Jewish Congress, wrote in a statement Monday that the younger Le Pen is “no less dangerous than her Holocaust-denying father.”

Many in the French political establishment concur, and most of the losing candidates in Sunday’s voting urged their supporters to vote for Macron. On Sunday, both Benoit Hamon of the Socialist Party and Francois Fillon of The Republicans of former President Nicolas Sarkozy urged a united front against Le Pen.

But this year, that front has at least one major gap: Jean-Luc Melenchon, the communist candidate, who is also a Eurosceptic, did not call on his supporters to vote for Macron, whose economic and foreign policies are diametrically opposed to Melenchon’s.

Meanwhile, Le Pen is already attacking Macron on points that resonate with many of her voters. In a speech she made to supporters following the first round, she called Macron “Hollande’s extension,” saying he was guaranteed to continue the president’s policy of “mass immigration.” In Macron’s world, she added, “the rich man reigns.”

In light of the challenges facing Macron, even some of his ardent supporters spoke openly of their concern ahead of the final round.

“I don’t consider today as a victory,” Michael Amsellem, one of Macron’s many Jewish supporters, wrote on Facebook. “Having Le Pen in the second round is a tragedy.”

Citing the abstention of Melenchon and his supporters from the republican front, as well as polarization between “protectionists and internationalists, “we are in a major danger zone from Le Pen,” Amsellem wrote.

“The French people are full of surprises,” he added. “This is not going to be so simple.”