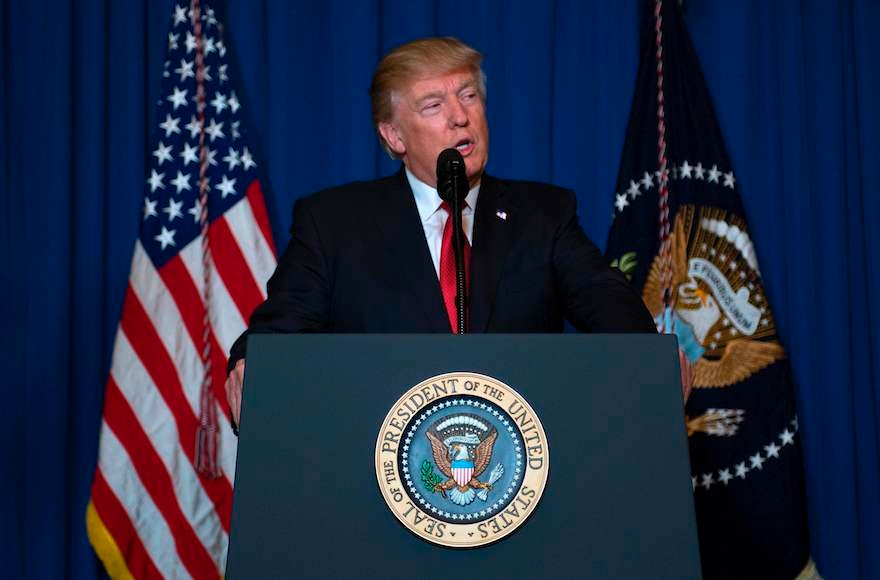 (JTA) — President Donald Trump described how “six million Jews had been brutally slaughtered,” in a proclamation marking the week-long Days of Remembrance of Victims of the Holocaust.

Trump’s statement condemned the Nazi murder of 6 million Jews as well as other minorities.

“The Holocaust was the state-sponsored, systematic persecution and attempted annihilation of European Jewry by the Nazi regime and its collaborators. By the end of World War II, six million Jews had been brutally slaughtered,” read the statement, adding that other targeted groups included “Roma (Gypsies), persons with mental and physical disabilities, Soviet prisoners of war, Jehovah’s Witnesses, Slavs and other peoples of Europe, gays, and political opponents.”

The statement, as well as a pre-recorded speech given by Trump to the World Jewish Congress on Sunday, marked an evolution in his rhetoric from just three months ago, when his administration’s remembrance of the Holocaust failed to mention Jews and he seemingly appeared reluctant at first to condemn anti-Semitism.

“We support the Jewish diaspora and the State of Israel as we fulfill our duty to remember the victims, honor their memory and their lives, and celebrate humanity’s victory over tyranny and evil,” the statement said.

“During this week in 1945, American and Allied forces liberated the concentration camp at Dachau and other Nazi death camps, laying bare to the world the unconscionable horror of the Holocaust. We must remain vigilant against hateful ideologies and indifference,” his statement said. “Every generation must learn and apply the lessons of the Holocaust so that such horror, atrocity, and genocide never again occur.”

On Tuesday, Trump will deliver public remarks as part of the museum’s annual Days of Remembrance ceremony — a day after Holocaust Memorial Day is observed in Israel — in the U.S. Capitol rotunda.

Every president since the museum opened in 1993 has participated in Days of Remembrance events, which were first held in 1979 and later established by Congress as the nation’s commemoration of the Holocaust.