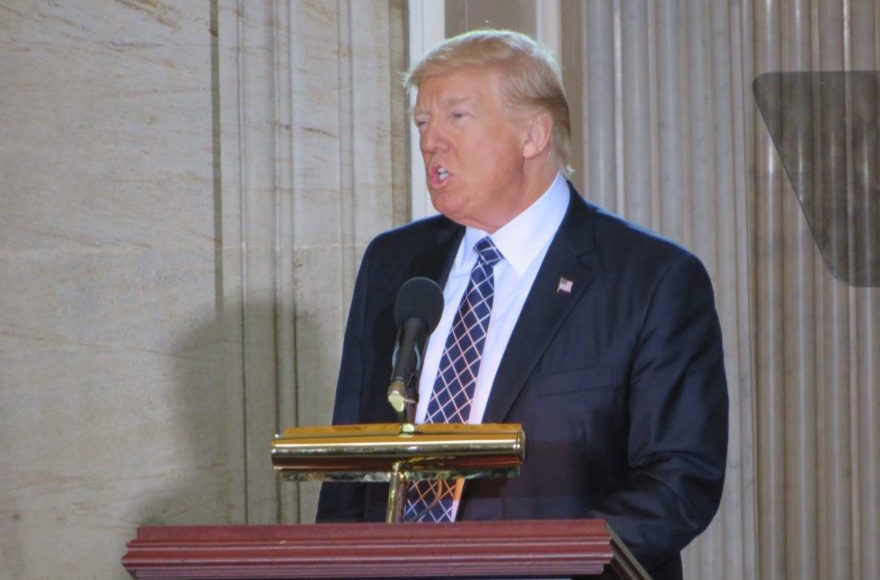 WASHINGTON (JTA) — President Donald Trump pledged to combat anti-Semitism and Holocaust denialism, and to defend Israel in a speech marking the national days of Holocaust remembrance.

“Those who deny the Holocaust are an accomplice to this horrible evil,” he said Tuesday at the annual ceremony organized by the U.S. Holocaust Memorial Museum in the Capitol Rotunda. “And we’ll never be silent — we just won’t. We will never, ever be silent in the face of evil again.”

Trump described anti-Semitism “on university campuses, in the public square and in threats against Jewish citizens. Even worse, it’s been on display in the most sinister manner when terrorists attack Jewish communities, or when aggressors threaten Israel with total and complete destruction.”

He pledged to “stamp out prejudice.”

The speech and a series of statements Trump has issued in recent days differ considerably from his first week in office, when a Jan. 27 statement marking International Holocaust Remembrance Day neglected to mention Jews. Trump’s spokesmen subsequently said they were aiming at an “inclusive” statement to cover Jews and non-Jews murdered in the Holocaust, although the term is applied by historians solely to the Jewish genocide.