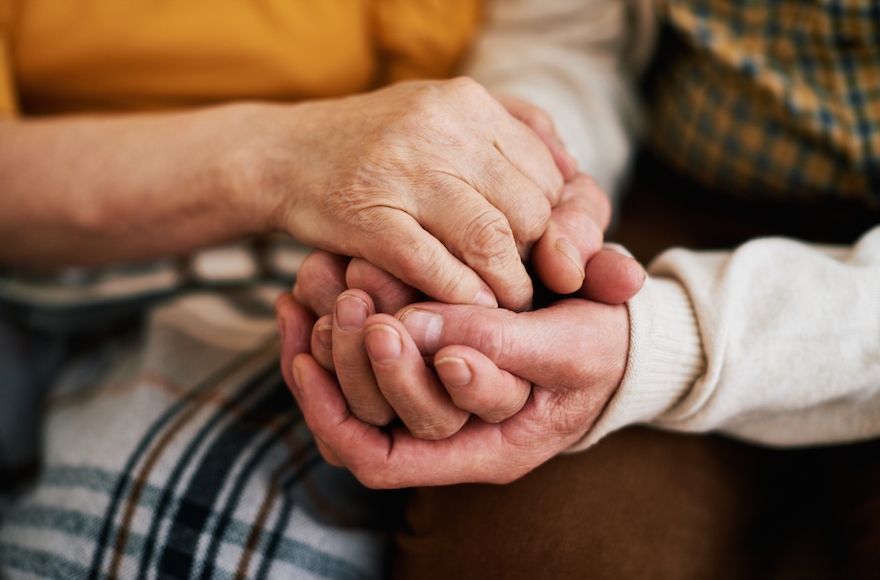 (JTA) — A Chicago Jewish couple who were married for 69 years died moments apart in the same hospital room while holding hands.

Teresa Vatkin, 89, died at 12:10 a.m. Saturday at Highland Park Hospital, and her husband, Isaac, died at approximately 12:50 a.m. as they wheeled his wife from the room and their hands separated, according to local reports.

Teresa Vatkin had been suffering from dementia for the past decade. Isaac was her caregiver, staying by her side even when she entered a memory care facility.

“The moment he felt we removed her hand from his, he was able to say ‘OK, I’m done protecting her. I can go and rest as well,’” their son, Daniel, told the Chicago Sun-Times. “The ultimate in chivalry — so he could go to heaven and open the door for her.”

“I saw it with my own eyes,” their daughter, Clara Gesklin, told the newspaper. “All of a sudden, when their fingers separated, he just stopped breathing.”

Isaac Vatkin had been admitted to the hospital with influenza and his wife with pneumonia. They were moved to the same room on Friday afternoon, when both were breathing shallowly and were unresponsive.

The couple grew up in Argentina, on opposite ends of the country, and wrote love letters to each other three times a week until they married in 1947. Isaac, known as Alberto in Argentina to avoid anti-Semitism, was a leathermaker.

The Vatkins moved to Chicago in 1968, where Isaac worked as a kosher butcher and invested in apartments.

On Monday, they were memorialized in a joint funeral.