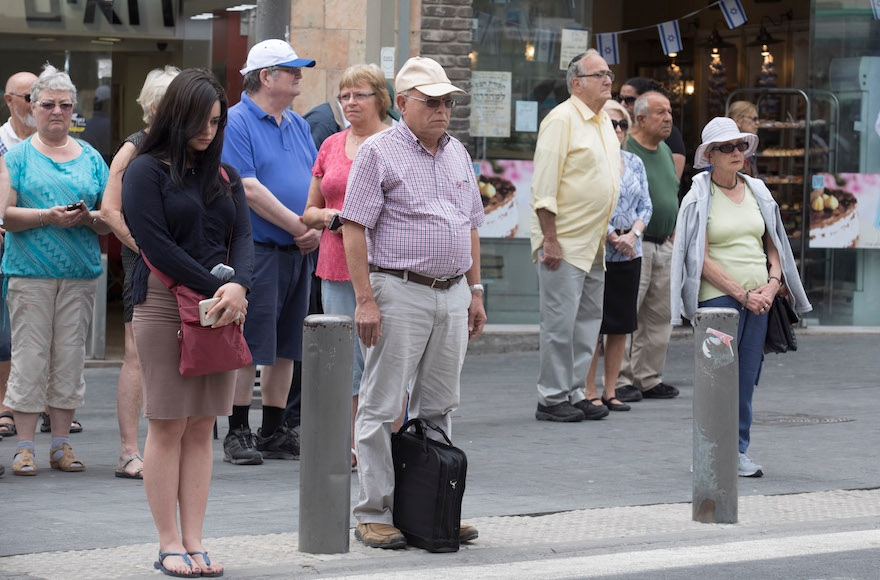 JERUSALEM (JTA) — Israelis across the country stood at attention for a minute-long siren marking the start of the 24-hour Memorial Day, or Yom Hazikaron.

The siren sounded at 8 p.m. Sunday. Over Memorial Day, Israel will remember the 23,544 men and women who have died defending the State of Israel and its prestate Jewish population since the start of the Zionist movement in 1860.

The day also recalls the 3,117 terror victims who have been killed in the same time period.

Some 97 Israelis have been added to the count since last Memorial Day, including 37 disabled Israelis who have died of their injuries.

In a Memorial Day eve service at the Western Wall, President Reuven Rivlin and the widow of Haggai Ben-Ari, who succumbed in January to his injuries sustained during the 2014 Gaza war, lit the memorial torch. He had been in a coma for 2 1/2 years and died at 31. His widow was flanked by two of her three young children.

“By this wall of tears and of hopes, this evening, 50 years after the liberation of Jerusalem, we remember: our liberty is sacred, both sacred and hard. We know that there is a price to be paid for our existence here, for our liberty. There is a price, and we, in awe and terror, are willing to pay that price,” Rivlin said.

The president turned to the families at the ceremony and said:  “Dear bereaved families, we are living that privilege. You paid the price. The price of our liberty purchased in blood.”

Rivlin also called for continued efforts to bring home the bodies of two soldiers that remain held by Hamas in Gaza since the 2014 war.

There are 9,157 bereaved parents, 4,881 widows, and 1,843 orphans under the age of 30 of killed Israeli soldiers and security officers, according to the Defense Ministry.

Earlier Monday, a ceremony attended by Prime Minister Benjamin Netanyahu, Knesset Speaker Yuli Edelstein and Jerusalem Mayor Nir Barkat was held at the building in Jerusalem of Yad Labanim, an association of bereaved families. Hours earlier, Netanyahu spoke at the dedication of a new remembrance hall for Israel’s fallen soldiers on Mount Herzl. Netanyahu was heckled by a bereaved father, Shaul Chitayat, who shouted “Apologize! I don’t forgive you.”

During Memorial Day, regular television programming and entertainment is suspended. The names and ranks of every killed soldier are shown on a 24-hour television broadcast, each flashed on the screen for several seconds.

Memorial Day ends at 8 p.m. Monday with a ceremony on Mount Herzl, including the lighting of 12 torches that heralds the start of Independence Day.