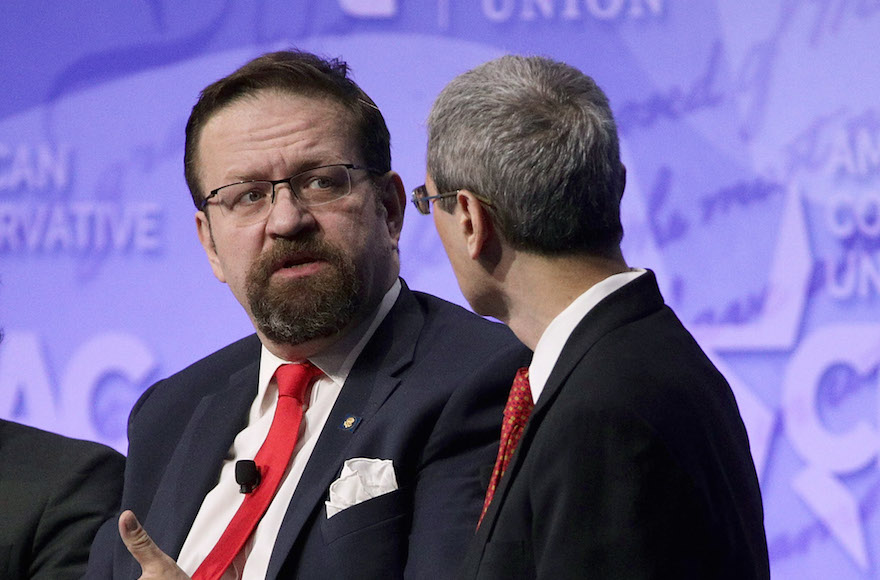 (JTA) – Sebastian Gorka, who advises President Donald Trump on counterterrorism, reportedly is leaving the White House for a role elsewhere in the administration.

Gorka has been an object of Jewish attention since he was photographed at an inaugural ball sporting a medal of the Vitez Rend, a movement founded by the anti-Semitic pre- and World War II-era Hungarian leader, Miklos Horthy. Gorka has said he wore the regalia as a tribute to his late father, who battled the communists as an adult after the war. The Forward has reported that he retains deeper ties to a reconstituted version of the movement.

So why after barely three months in government is Gorka leaving a plum job on the National Security Council? We won’t know for a while, if ever. His defenders told the Washington Examiner that the position was temporary in any case, and in his new role he will be better positioned to engage in the “war of ideas.”

There are plenty of theories out there. Let’s assess:

Horthy was an anti-Semite and, for a time at least, a Nazi collaborator. The State Department lists his Vitez Rend as having been under Nazi direction. The most explicit calls for Gorka’s dismissal — or at least for an investigation into his ties to the far right — have come from influential Jewish lawmakers and groups.

But Gorka denies membership in any current manifestation of Vitez. (The Forward quotes leaders of one of two namesakes as saying he is a member, but there is no smoking gun evidence.)

Gorka says he wore the medal as a tribute to his father, who was awarded the honor in 1979 for his struggles against the Hungarian communist regime. The order by then had come to be identified with resistance to communists.

No one has uncovered any anti-Semitic writings or pronouncements by Gorka. In fact, he reportedly co-founded a Hungarian political party in 2006 in part out of disgust with the anti-Semitism of other parties on the right.

Gorka’s defenders, particularly at Breitbart News, where like some other Trump administration officials he was employed, say leftists out to get Trump are seeking blood. These defenders note the lack of hard evidence (outlined above) that Gorka has a formal relationship with Vitez, and of any evidence that he is an anti-Semite. (They also quote Gorka’s late father as saying in a book that his family protected Hungarian Jews during the Nazi occupation, although they have not produced corroborative evidence.)

But the Vitez’s Nazi associations may not have been preeminent for Gorka, or his father, or the fellow resisters to communism who gave him the award. The Nazi taint remains, though, for Jews with even a passing acquaintance with Horthy and the Vitez.

Political involvement is bruising, and insensitivity to appearances costs, career wise. Were a Southern politician to sport a Confederate tribute to honor an ancestor, however dedicated the politician was in the present day to racial healing and reconciliation, he would face political repercussions, at least until he delivered a public apology.

George Allen, a Virginia senator once touted as a presidential hopeful, saw his career go down in flames in 2006 after he used a racial slur, “macaca,” that he may not have realized was a racial slur. His failure to apologize in real time, combined with his subsequent denial that his mother was Jewish, cost him – and he now acknowledges mishandling the scandal.

Perhaps Gorka did not realize that wearing a Vitez medal would bring up painful associations for Jews and other victims of the Nazis, no matter how the group reconstituted itself. He may not be an anti-Semite, but he’s not exactly warm and fuzzy when it comes to Jewish sensibilities: He dismissed as “asinine” criticism of a Trump statement on the Holocaust that omitted reference to Jews, even though attempts to suppress the particularity of Jewish suffering during World War II is now at the center of nationalist politics in Hungary and elsewhere in Europe. That exacts a price.

In 2008, Daniel Kurtzer, an Orthodox Jew who had served as ambassador to Israel, campaigned for Barack Obama hoping for a position in the administration. That summer he made what may have seemed to him a routine trip to an academic conference in Syria. The McCain campaign seized on the trip to embarrass Obama, and Kurtzer spent the next eight years in academe. Notably, some of the same conservatives who targeted Kurtzer are now defending Gorka and still hope to wound Rep. Keith Ellison, D-Minn., the Democratic National Committee’s deputy chairman, for associations he has long since repudiated.

Gorka reportedly still doesn’t have one, which means he has to sit out meetings requiring a clearance – and attending those meetings pretty much defines being employed by the National Security Council.

But — there’s not much of a but here. Lacking a security clearance is the likeliest reason Gorka is leaving the NSC. Trump, however, reportedly enjoys Gorka’s combative TV personality and has given a pass to other staffers who do well on camera but otherwise seem to be flailing. (See Sean Spicer, spokesman.)

Why the security clearance no-go? It’s the fabrications or the gun.

BuzzFeed last week outlined how Hungary’s security agencies denied Gorka clearance in 2002, supposedly because Gorka had exaggerated the importance of his prior experience in the British military.

Gorka also was arrested last year for bringing a handgun through airport security. A judge this year dismissed the charges, and Gorka said the incident was a mistake.

But the reason for the reported denial of a security clearance may be straightforward and have little to do with Gorka’s colorful biography. U.S. security clearances are notoriously hard to secure for folks with deep ties in foreign lands, however innocent those ties may be and however closely allied the foreign countries are to the United States. Gorka was born in Britain, served in its military and was a player in Hungarian politics. Those alignments would likely raise flags for the U.S. national security establishment.

Gorka’s doctorate in political science from Corvinus, a little-known university in Budapest, has been lambasted both for a dissertation on terrorism that experts in the field have said is vague to the point of parody, and for a report that two of its three of its referees lacked doctorates themselves — and one was a friend of Gorka’s. He claims expertise in Islam, but there is no indication that he speaks Arabic, the language of the Quran, or has lived in Muslim majority lands.

Gorka acknowledges peaceful and moderate iterations of Islam, but he also argues that Islam’s holy texts may be used to justify barbarous violence in a way that Christian texts cannot.

But Gorka works for Steve Bannon, who has said “Islam is not a religion of peace,” and Trump, who has said “I think Islam hates us.” Gorka’s is the comparatively nuanced view.