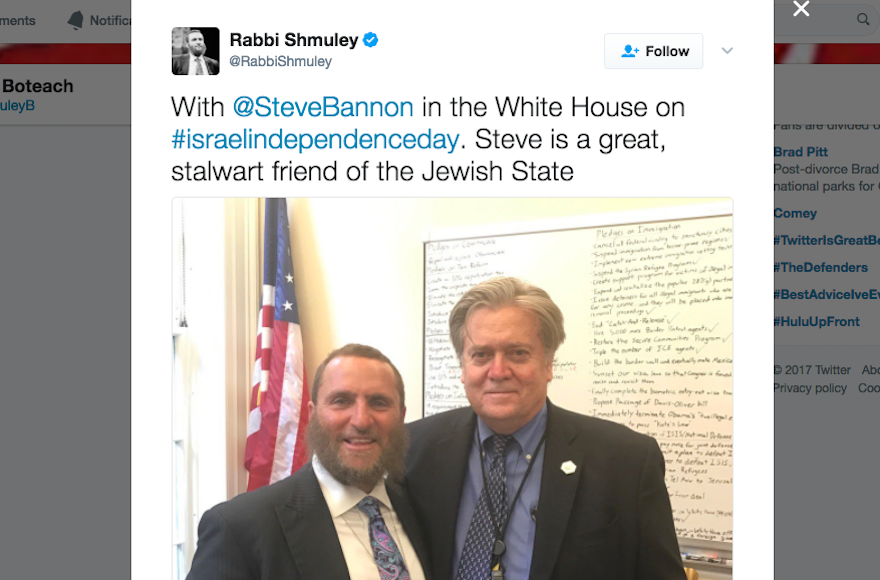 (JTA) — The man who calls himself “America’s Rabbi” revealed the agenda of America’s most powerful nationalist in a photo op with Stephen Bannon.

Shmuley Boteach, an author, speaker and adviser to several celebrities, tweeted a photo of himself with Bannon, President Donald Trump’s chief strategist, on Tuesday.

It was not the first time that Boteach, who ran for Congress as a Republican in 2012, has posted a photo with Bannon — the driving force behind immigration policies that triggered nationwide protest and the former executive chairman of Breitbart News, the far-right news site.

Bannon, who leads the so-called nationalist bloc of Trump advisers, famously has an itemized agenda of goals handwritten on a whiteboard in his office. And because that whiteboard was the backdrop for Boteach’s photo, it is now (partially) the world’s to see.

With @SteveBannon in the White House on #israelindependenceday. Steve is a great, stalwart friend of the Jewish State pic.twitter.com/PFxSCK7blc

Bannon’s list on immigration goals, for example, has a few items checked off, while others remain unfulfilled. On the checked-off list are goals like “Hire 5,000 more border patrol agents,” which Trump called for in a February executive order but which has yet to be implemented, and “Restore the Secure Communities Program,” a reference to an immigration enforcement program restored in a January executive order.

Others are checked off but not completed, like “Suspend the Syrian refugee program” and “suspend immigration from terror-prone regions.” These were both provisions of Trump’s two travel bans, issued in January and March, but both have been struck down by federal courts. (Most of the large Jewish organizations opposed both plans, although a few on the right embraced them.)

Also on Bannon’s list? The words “Iran deal” and “Tel Aviv to Jerusalem.” These presumably refer to Trump’s pledges to move the U.S. Embassy in Israel to Jerusalem and to scrap or renegotiate the 2015 agreement on Iran’s nuclear program. Neither has happened.

For what it’s worth, Bannon wasn’t Boteach’s only photo buddy on Tuesday, when he attended a celebration of Israel’s Independence Day at the White House. Among others, the famously self-promotional spiritual leader posed with David Friedman, the new U.S. ambassador to Israel, as well as with Anti-Defamation League National Director Jonathan Greenblatt, who once objected to Bannon’s White House appointment on the grounds that he “presided over the premier website of the ‘alt-right’ — a loose-knit group of white nationalists and unabashed anti-Semites and racists.”

Supporters of Bannon, however, have tended to agree with Bannon’s own characterization of Breitbart News as “the most pro-Israel site in the United States of America.”