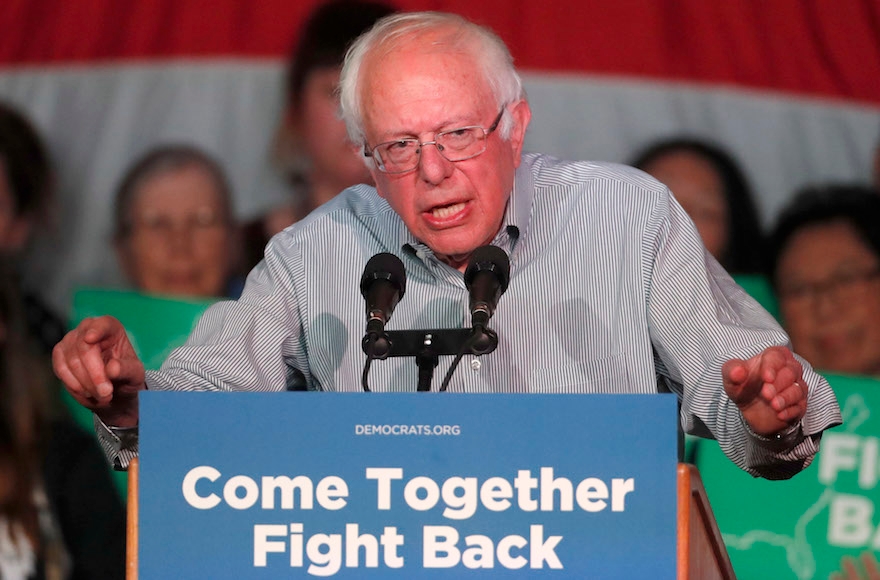 WASHINGTON (JTA) – In an appearance on Al Jazeera, Bernie Sanders defended Israel’s right to exist, rejected BDS as a tactic and assailed the United Nations for singling out the country for condemnation.

The Vermont senator’s interview Wednesday on the Qatar-based network, known for its often hypercritical coverage of Israel, was consistent with a style that Americans came to know last year during his run for the Democratic Party’s presidential nomination: Sanders does not modify his messaging for his audience.

Sanders, despite his defeat in the primaries to Hillary Clinton, who went on to lose to Donald Trump, remains the standard-bearer of the American left. His robust rejection of the Boycott, Divestment and Sanctions movement is evidence that a firewall remains among elected officials on the American left against more radical expressions of Israel criticism that have gained traction overseas.

The interviewer, Dena Takruri, challenged Sanders for joining every other U.S. senator last month in signing a letter to U.N. Secretary-General Antonio Guterres urging him to remedy the body’s “anti-Israel agenda.”

I asked @SenSanders about Palestine, the BDS movement targeting Israel, and whether he supports a one state solution pic.twitter.com/xOQmxMelFp

Takruri asked why Sanders was “effectively trying to shield [Israel] from criticism.” Sanders interrupted, “No, no, no, no, no, I don’t accept that,” saying “there are many problems with Israel” and he would continue to “be critical of a lot of what Israel does.”

“On the other hand, to see Israel attacked over and over again for human rights violations which may be true, when you have countries like Saudi Arabia or Syria, Saudi Arabia – I’m not quite sure if a woman can even drive a car today,” Sanders said.

“So I think the thrust of that letter is not to say that Israel does not have human rights issues — it does — but to say how come it’s only Israel when you have other countries where women are treated as third-class citizens, where in Egypt, I don’t know how many thousands of people now lingering in jail, so that’s the point of that, not to defend Israel but to say why only Israel, you want to talk about human rights, let’s talk about human rights,” he said.

Asked by Takruri whether he “respected” BDS as a legitimate nonviolent protest movement, Sanders said, “No, I don’t.” The senator suggested in his reply that the tactic was counterproductive as a means of bringing the sides to peace talks.

“People will do what they want to do, but I think our job as a nation is to do everything humanly possible to bring Israel and the Palestinians and the entire Middle East to the degree that we can together, but no, I’m not a supporter of that,” he said.

“What must be done is that the United States of America is to have a Middle East policy which is even-handed, which does not simply supply endless amounts of money, of military support to Israel, but which treats both sides with respect and dignity and does our best to bring them to the table.”

Sanders also rejected Takruri’s assertion that the two-state solution is almost dead and said he would not embrace a one-state solution.

“I think if that happens, then that would be the end of the State of Israel and I support Israel’s right to exist,” he said. “I think if there is the political will to make it happen and if there is good faith on both sides I do think it’s possible, and I think there has not been good faith, certainly on this Israeli government and I have my doubts about parts of the Palestinian leadership as well.”

Sanders, the first Jewish candidate to win major party nominating contests, was critical of conventional pro-Israel postures during the campaign, but also defended the state.

He told MSNBC last year that anti-Semitism was a factor driving the BDS movement, yet in a debate in the New York primary – with its critical mass of Jewish voters – Sanders chided Clinton for barely mentioning Palestinians in her speech earlier the same year to the American Israel Public Affairs Committee.

During the campaign, he hired as his Jewish outreach staffer Simone Zimmerman, who founded IfNotNow, which protests mainstream U.S. Jewish silence on Israel’s occupation. Although Sanders fired Zimmerman after her vulgar postings on Israeli Prime Minister Benjamin Netanyahu came to light, the very hiring was a signal that there was now a political home for young Jews who embraced the idea of Israel but were willing to robustly protest its government’s actions.

Sanders also named prominent Israel critics to the Democrats platform-drafting committee, yet when their Israel-critical language was rejected, he nonetheless robustly endorsed the platform because it met his other demands on economic inequality. He described himself at a meeting in New York’s Harlem neighborhood as a “strong defender of Israel” and for the first time spoke warmly about the time he spent in Israel in the 1960s on a kibbutz.

Democrats in recent years have grown increasingly critical of Israel, a result in part of the parlous relationship between Netanyahu and President Barack Obama, and the fraught tone of the debate in 2015 over the Iran nuclear agreement.

But the tense tone of the Al Jazeera interview and Sanders’ refusal to accept anti-Israel pieties commonplace among progressives here and overseas suggests the resistance among Democrats to more radical expressions of Israel criticism. Democratic lawmakers, for instance, continue to join Republicans in overwhelmingly approving anti-BDS legislation on the state and federal levels.