Trump removes tweet saying it was an ‘honor’ to host Abbas 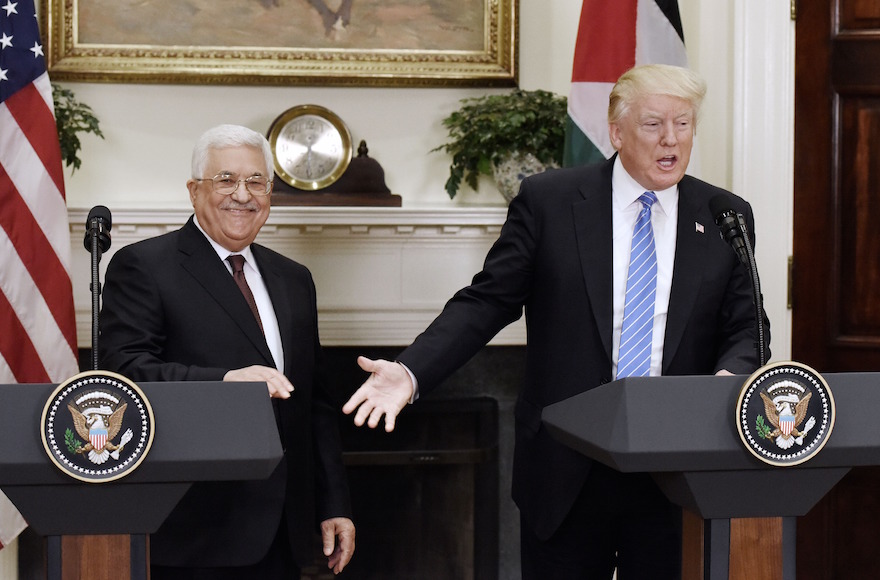 (JTA) — President Donald Trump deleted a tweet in which he said it was an “an honor” to host Palestinian Authority President Mahmoud Abbas at the White House a day after the two leaders met.

The tweet, which also included video from the two leaders’ meeting, was gone on Thursday, 13 hours after it was originally posted, according to ProPublica, which tracks the president’s deleted tweets.

After meeting with Abbas, Trump wrote on Twitter: “An honor to host President Mahmoud Abbas at the WH today. Hopefully something terrific could come out of it between the Palestinians & Israel.”

At the meeting, Trump said he was optimistic that he could pull off the deal for Israeli-Palestinian peace that has frustrated at least four of his predecessors, with the most recent collapse of talks in 2014 followed by a war between Israel and Hamas in the Gaza Strip.

He did not address — at least in the public portion of the meeting — a demand by Netanyahu that Abbas stop Palestinian Authority payments to families of terrorists killed or jailed by Israel. Trump did, however, call on Abbas to address incitement.

“There can be no lasting peace unless the Palestinian leaders speak in a unified voice against incitement to violence and hate, there’s such hatred, but hopefully there won’t be such hatred for very long,” the president said.