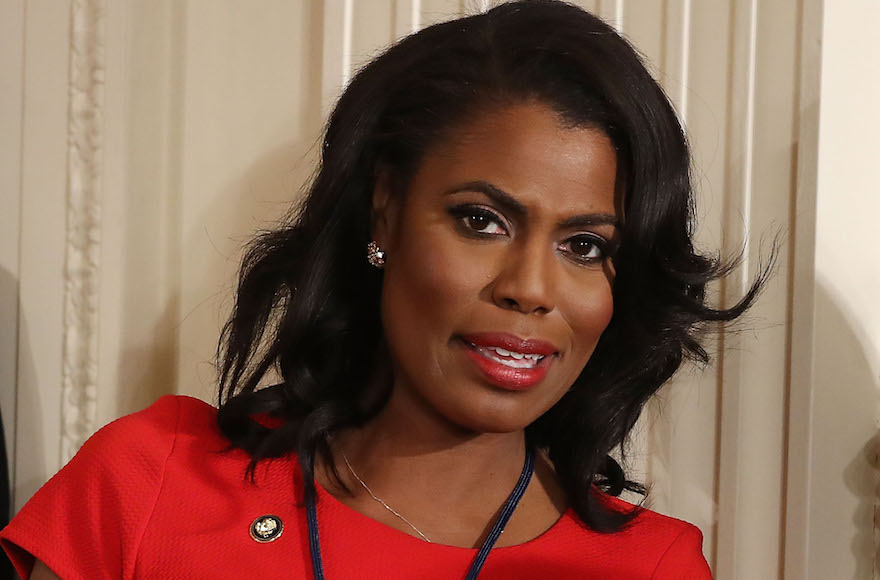 Omarosa Manigault at a press conference in the East Room at the White House, Feb. 16, 2017. (Mark Wilson/Getty Images)
Advertisement

(JTA) — Presidential adviser Omarosa Manigault, a former reality TV star, said she would “look forward” to meeting with Louis Farrakhan, the Nation of Islam leader known for his anti-Semitic statements.

“I think any of your audience would know I’ve never shied away from having an open, and I believe a good, relationship with Louis Farrakhan,” Manigault said Thursday morning in an interview on the Chicago radio station WVON, Politico reported later in the day. “I would look forward to receiving that invitation and sitting down with him.”

Farrakhan has long been described by the Southern Poverty Law Center as an anti-Semite who “routinely accuses Jews of manipulating the U.S. government and controlling the levels of world power.” He often recycles anti-Semitic tropes in his speeches, such as one in 2015 in which he called Jews “wicked” and his “enemies.”

Farrakhan, 83, who has been the leader of the controversial Nation of Islam group since 1977, maintains that “Israelis and Zionist Jews” had a hand in the 9/11 terrorist attacks in 2001.

Manigault appeared on the first season of NBC’s “The Apprentice,” a reality show in which contestants vied to impress Donald Trump through a series of business challenges. She became a minor celebrity for her competitive tactics and antagonistic attitude.

After Manigault served as a prominent campaign surrogate during the election season, Trump named her as a presidential assistant and director of communications for the Office of Public liaison in January.

The Anti-Defamation League was “deeply disturbed” by Manigault’s comments on the radio station.

“Louis Farrakhan should not be made to feel welcome by anyone in the White House,” ADL CEO Jonathan Greenblatt said in a statement. “Such an overture would only serve to legitimize his long record of conspiratorial and hateful views toward Jews. We hope that the administration will make it clear that Farrakhan and his anti-Semitic organization will find no supporters in the White House.”