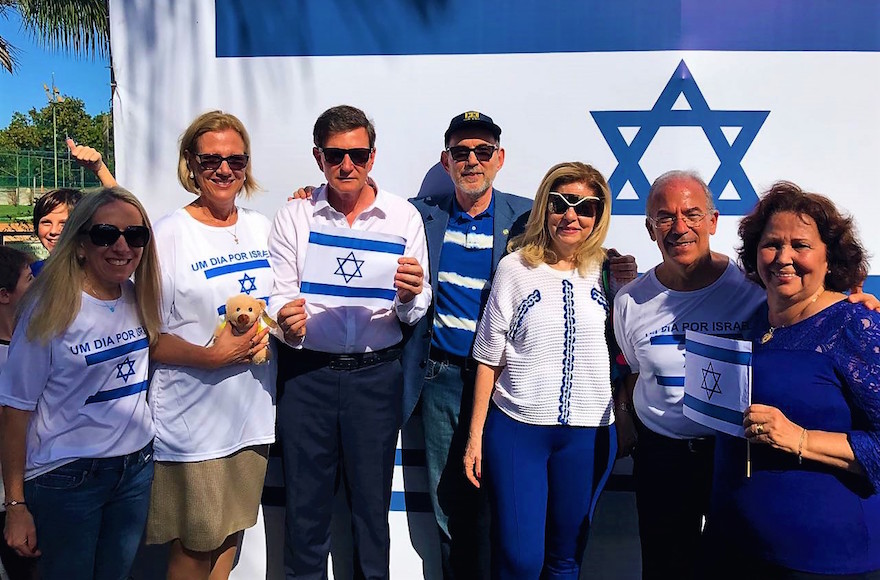 Marcelo Crivella, third from left, whose four-year term started in January, has been a longtime friend of the Jewish community. (Rua Judaica)
Advertisement

RIO DE JANEIRO (JTA) — The mayor of Rio de Janeiro spoke up for Israel before some 2,000 people during a celebration of Israel’s Independence Day.

Marcelo Crivella, whose four-year term started in January, has been a longtime friend of the Jewish community and an enthusiast of the Jewish state, which he reportedly has visited some 40 times.

“Israel is proud of its 69 years of fight and victories. It has shown to the world that it is a strong democracy surrounded by the most barbarian atrocities and totalitarian regimes,” Crivella, a prominent evangelical leader, said at the celebrations held Sunday. “Israel, which has a total area that is equivalent to half of that of Rio de Janeiro state, is very important to us.”

Israel’s newly appointed ambassador, Yossi Shelly, came from Brasilia for the event. Several Jewish and non-Jewish officials are also on hand at the ceremony, which also marked the 50th anniversary of the reunification of Jerusalem.

“This celebration shows the unity of Rio’s Jewish community and the great friendship that we have built with our city’s mayor,” Israel’s honorary consul, Osias Wurman, told JTA.

In November, Crivella as mayor-elect declared that Rio should surround itself with walls like Jerusalem in order to prevent the entry of arms and drugs. He later celebrated his victory in Israel, where he met Prime Minister Benjamin Netanyahu and Jerusalem Mayor Nir Barkat.

Crivella is a nephew of Edir Macedo, founder of the evangelical Universal Church of the Kingdom of God some 40 years ago. He also has played a pivotal role in the church as it gained some 5.2 million followers at 13,000 temples across Brazil and worldwide. The church owns the second-largest TV station in Brazil, as well as a conglomerate of newspapers and radio stations.