Jewish life, like college campuses, could use a little more free speech 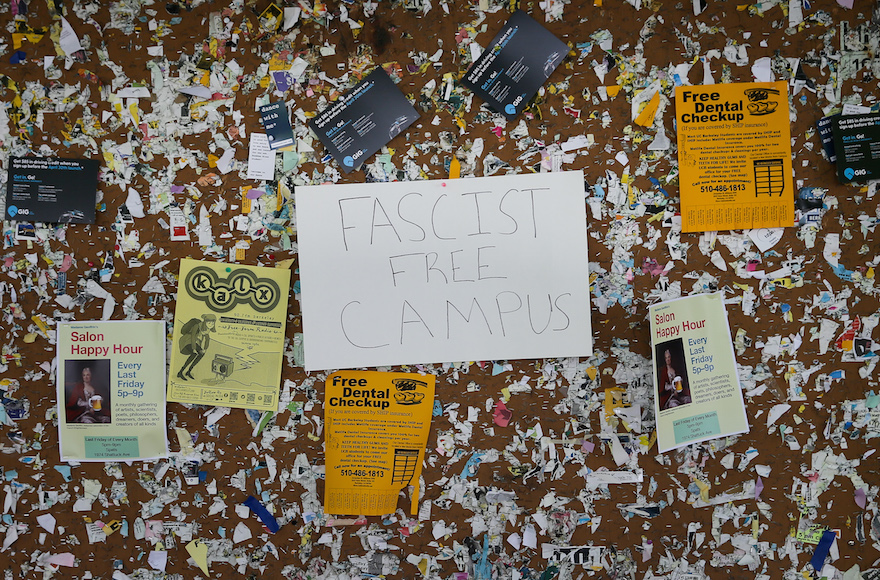 A sign reading "Fascist Free Campus" on the UC Berkeley campus, April 27, 2017. Protestors gathered in Berkeley to protest the cancellation of a speech by conservative political commentator Ann Coulter at the university. (Elijah Nouvelage/Getty Images)
Advertisement

Kurtzer, a former U.S. ambassador to Israel and a professor of Middle East studies at Princeton, supports the two-state solution and doesn’t think the Israeli government is heading in the “right direction.”

Wisse, a famed Yiddish scholar at Harvard, regards Jewish support for the peace process as “self-delusion” and planned to speak on the topic “Are American Jews their own worst enemies?”

Kurtzer spoke at a Conservative synagogue, the majority of whose members, I can say from personal experience, are essentially on board with his views of the Middle East.

Wisse spoke at a modern Orthodox synagogue whose members, it’s probably safe to say, tend to share her skepticism about the two-state solution, Democrats and liberal Zionism.

I wish they had switched places.

Efforts by protesters at the University of California, Berkeley, to shut down a speech by conservative Ann Coulter and at Auburn University to block an appearance by white nationalist Richard Spencer are being held up as examples of left-wing academia’s inability to tolerate — or even listen to — dissenting views. Right-wing sites condemn campus “snowflakes” who are willing to deny free speech to those with whom they disagree. Republicans in the Michigan state Senate have introduced a bill that would punish college students who “have converted our fundamental freedom of speech into a freedom from speech,” as a sponsor put it.

It’s not just the right who are critical of the “shut it down” left: Liberals object that attempts to silence speakers are violations of a fundamental right to free speech, a perversion of the whole idea of a university education and simply bad politics, giving the right a cudgel with which to beat the left. As Bernie Sanders said of Coulter’s opponents, “What are you afraid of — her ideas?”

In some ways the debate has become a little hysterical. As Jesse Singal noted in New York magazine, recent surveys at Yale suggest students there are about as likely as the general population to support free speech — that is, by wide margins. On the other hand, Pew reported last year that 40 percent of students say the government should be able to “prevent people from saying offensive statements about minority groups.” Singal says that’s not far off from the number of Americans who say some forms of speech should be banned by the government.

The idea that a small number of extremists can hijack an event and shut down a speaker in the name of what they deem “acceptable” speech is troubling — a point pro-Israel activists on campus have been trying to make in recent years, with far less success than supporters of Coulter or even of Spencer. From Brown University, where protesters objected to a speech by a transgender activist because it was being sponsored by the campus Hillel,  to the University of Minnesota, where hecklers disrupted a speech by the Israeli philosopher Moshe Halbertal, Israel has become a flash point in the free speech debate. J. — The Jewish News of Northern California had an important article last week on San Francisco State University and its “tepid” responses to various anti-Israel incidents, like the successful attempt by a pro-Palestinian group to shout down Jerusalem Mayor Nir Barkat during a Hillel-sponsored appearance in April 2016.

Not to be outdone, right-wing supporters of Israel are taking a cue from the left-wing protesters they profess to despise. Last week, a synagogue in the Detroit suburbs canceled a scheduled appearance by the Israeli singer and peace activist known as Noa after fielding threats from protesters presumably on the right. The synagogue explained it wasn’t able to guarantee security for the event, although it also pointed out, apologetically and unnecessarily, that the event was “not intended to reflect political viewpoints.”

Noa, a member of the board of the New Israel Fund, has never made a secret of her left-wing views or her support of Jewish-Arab coexistence. But her concerts aren’t peace rallies, and even if they were it is depressing to see how easily one side in a political argument is willing to support threats — not arguments, not rival events, but physical threats  — to shut down the other. Take a look at the comment section in an article about the Noa cancellation in The Times of Israel and see how giddy her opponents are in seeing a synagogue event canceled for fear of a violent reprisal.

The pro-Israel right also celebrated last month when Fordham University denied a request by Students for Justice in Palestine to form a club there on the grounds that its goals “clearly conflict with and run contrary to the mission and values” of the New York City school. SJP chapters are harsh and often dishonest in their attacks on Israel, and Fordham is a private university, but are we really comfortable with administrators deciding which causes are acceptable and which aren’t? And if we are, can we really say we value the right to free speech?

But what about speech that is so reprehensible that it truly doesn’t deserve a hearing? (The First Amendment, by the way, doesn’t say anything about “deserving” the right to free speech.) One option is to ignore it and not give awful speakers the attention they crave. Another is to fight back with more speech, which is what the Founders evidently intended.

The very worst option is to criminalize it or try to shut it down with a real or implied threat of violence.

It’s easy to blame “kids these days” for a climate of political correctness or a narrowing of what is and isn’t acceptable thought on campus. But the university is merely reflecting a broader culture in which people are less inclined to listen to or tolerate opposing views. Thanks to technology and an explosion of narrow ideological media channels, they don’t have to. The presidential campaign of 2016 was in part a reflection of the failure of each side of the political divide to hear the other.

I wish Kurtzer and Wisse had crossed over to presumably less friendly venues precisely because of the possibility that one side might have something to learn from the other. Both are incisive intellects whose arguments cannot be dismissed as thoughtless or delusional. They may not have changed any minds, but they may have made each side more thoughtful in its own views and perhaps have established a small sliver of common ground.