Meet the Jews who vouch for Trump aides Bannon and Gorka 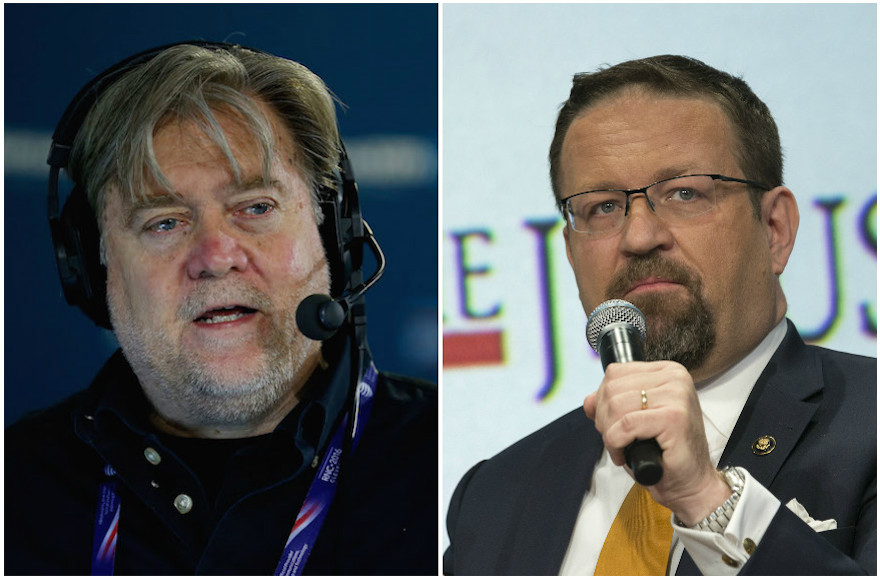 (JTA) — Once it was the job of the shtadlan — a literal translation from Hebrew is “intercessor” — to make the case for the Jews to the czar, the sultan, the king.

Now a couple of the president’s men are seeking shtadlans to make their case to the Jews.

Stephen Bannon, President Donald Trump’s top strategic adviser, and Sebastian Gorka, an adviser on counterterrorism, have met, been photographed with and vouched for by Jewish figures happy to counter the impression that either is no friend of the Jews.

Gorka, under scrutiny for his purported ties to the Hungarian right, name-checked a number of Jewish supporters when he spoke last week at The Jerusalem Post Conference in New York.

“The two Davids, Ira, Bruce, Jeff, Mort, Joel, Noah, you know who you are, OK, especially thank you to Rabbi Billet, who wrote this Friday an amazing piece,” he said.

Hershel Billet, the rabbi of a large modern Orthodox synagogue on New York’s Long Island, had written an essay defending Gorka against charges that “he is an antisemite with connections to fascist groups in his late father’s native Hungary.” Bruce Abramson, a  lawyer, and Jeff Ballabon, a media strategist, have penned similar open letters of recommendation.

Joel Pollak, a senior editor-at-large at Breitbart News, has called charges that Gorka is anti-Semitic a “smear.” And Mort Klein, the national president of the Zionist Organization of America, has declared that Gorka is a “great friend of Israel.” Noah Pollak (no relation), a conservative journalist, has excoriated attacks on Bannon and Gorka on social media. David Reaboi, a conservative columnist who speaks Hungarian, has written that quotes attributed to Gorka by The Forward are ripped from context.

Klein also has defended Bannon against charges that the news site he once led, Breitbart, courts anti-Semites within the so-called “alt-right.” Bannon recently posed for a selfie alongside Shmuley Boteach, the celebrity rabbi and one-time Republican congressional candidate, who tweeted, “Steve is a great, stalwart friend of the Jewish state.”

Non-Jewish politicians have always relied on Jewish surrogates to help make their case to Jewish voters.

What’s unusual here is that those seeking Jewish surrogacy are not politicians — they are staffers and hires, not even the kind who need to be confirmed by the Senate. Under previous presidents, their equivalents certainly cultivated Jewish leaders to solicit support for policies. But it’s hard to recall previous administration staffers who encouraged Jewish buddies to make phone calls and write essays to defend their personal honor.

The difference is that Bannon and Gorka have been identified — their defenders say unfairly — with movements deemed by many in the Jewish community as hostile to Jews: Bannon with the alt-right; Gorka with a reconstituted version of the Vitez Rend, an ultranationalist movement founded by wartime Hungarian leader and Nazi collaborator Miklos Horthy.

Gorka says he occasionally wears Vitez regalia to honor his late father, who in turn was honored by the new Vitez group for his work battling communists. Bannon, while he has acknowledged that the nationalist movements he admires attract anti-Semites and white supremacists, has also said he repudiates these tendencies.

Bannon said he launched Breitbart Jerusalem in part to counter what he saw as anti-Israel media bias. His intercessors tend to skate over his anti-globalist conspiratorial mindset that even absent mentions of Jews echoes ancient conspiracy theories about Jews that have proven deadly. Also dismissed is testimony by an ex-wife that Bannon sought to keep their children away from schools that attracted Jewish students.

The intercessions on Gorka’s behalf boil down to the “I know this guy, he’s solid, he has Jewish friends” kind of testimonials. Substance testifying to actual Judeophilia is thin, but then so is the evidence among those who would label Gorka a straight-out anti-Semite.

Here’s a gallery of the Bannon-Gorka intercessors:

Klein was probably the most outspoken critic among leaders of national Jewish groups of the Obama administration, and he has been among the most vocal Jewish defenders of the Trump administration — perhaps the only major figure to embrace its bans on entry to travelers from six Muslim majority countries and its temporary halt to the entry of refugees. (Courts have stayed both bans.)

“ZOA’s Morton Klein recently met and had a long meeting with Dr. Gorka at the White House, and can confirm that Dr. Gorka is a great friend of the Jewish people and Israel,” the ZOA posted on April 4.

“ZOA’s own experience and analysis of Breitbart articles confirms Mr. Bannon’s and Breitbart’s friendship and fair-mindedness towards Israel and the Jewish people,” ZOA posted in November, responding to criticism of Bannon from the Anti-Defamation League. “To accuse Mr. Bannon and Breitbart of anti-Semitism is Orwellian. In fact, Breitbart bravely fights against anti-Semitism.”

Ballabon and Abramson, in op-eds and through networking, helped make the case for Trump during the campaign, first to fellow Republican Jews and then to Jewish voters in the general campaign.

In March, they rebutted reporting in the Forward, which broke many of the scoops linking Gorka to the Vitez.

“The Forward could not find a single shred of evidence suggesting that Sebastian Gorka has ever done or said anything even remotely anti-Semitic,” they wrote in The Jerusalem Post. Instead, they charged, the Forward has a political agenda: Gorka defends Trump’s ban on Syrian refugees, while the Forward  is “an aggressively anti-Trump, pro-Syrian-refugee publication.”

Larry Cohler-Esses, the Forward editor who co-authored the stories in the Gorka investigation, defends the reporting.

“Our stories have … documented the close ties that the deputy assistant to the president forged with anti-Semitic forces during his political career in Hungary — nothing more, and certainly nothing less,” he wrote.

Now he can add defender of Bannon to this eclectic list. Boteach sought out the strategic adviser last week after attending Israel Independence Day festivities at the White House, and posted on social media photos of himself and Bannon posing in front of Bannon’s whiteboard, where he lists Trump’s promises and checks them off once completed.

Writing about the experience in Breitbart, Boteach said: “How can a man who publicly fights BDS, stands as a foremost opponent of the Jew-hating genocidal regime in Iran, and opens a Breitbart bureau in Jerusalem so that Israel’s voice can be heard be labeled an antisemite?” BDS refers to the Boycott, Divestment and Sanctions movement against Israel.

Pollak is the senior editor-at-large at Breitbart News. A Harvard Law graduate who interned for Alan Dershowitz, he tried and failed to unseat Rep. Jan Schakowsky, D-Ill., in 2010 with a campaign focusing on her endorsement by J Street. He has worked with Gorka and Bannon; the former also was a contributor to Breitbart News.

“Steve cares deeply about the fate of Jewish communities in America and throughout the world, a fact that is reflected in Breitbart News’ daily coverage,” Pollak wrote of Bannon last November. “It was in that spirit that Steve joined Breitbart News CEO Larry Solov (also Jewish) in launching Breitbart Jerusalem last year, fulfilling Andrew’s dream of opening a bureau in Israel specifically to cover the region from an unabashedly Zionist perspective.”

In February, Pollak wrote: “As any of his Breitbart News colleagues could testify, Gorka is not only pro-Israel but ‘pro-Jewish,’ and defends both against the threat of radical Islamic terrorism. But facts do not matter to the left and the mainstream media in their efforts to frighten the public and harass the administration.”

Does Trump need a Jewish intercessor? He has his daughter, Ivanka; her husband, Jared Kushner, and his adviser, Jason Greenblatt. No less a figure than Israeli Prime Minister Benjamin Netanyahu has endorsed Trump’s pro-Jewish bona fides.

Still and all, another intercessor has emerged in Lauder, the president of the World Jewish Congress — the sole Jewish leader to give Trump a pass for omitting mention of Jews in his Jan. 27 statement marking International Holocaust Remembrance Day.

“Any fair reading of the White House statement today on the International Holocaust Memorial Day [sic] will see it appropriately commemorates the suffering and the heroism that mark that dark chapter in modern history,” Lauder said at the time.

The twist: Lauder has also emerged as an intercessor for another leader, Palestinian Authority President Mahmoud Abbas. He hosted a private dinner for Abbas and Trump officials at his Washington, D.C., home last week, and has encouraged Trump to press forward in his plans to forge an Israeli-Palestinian peace.