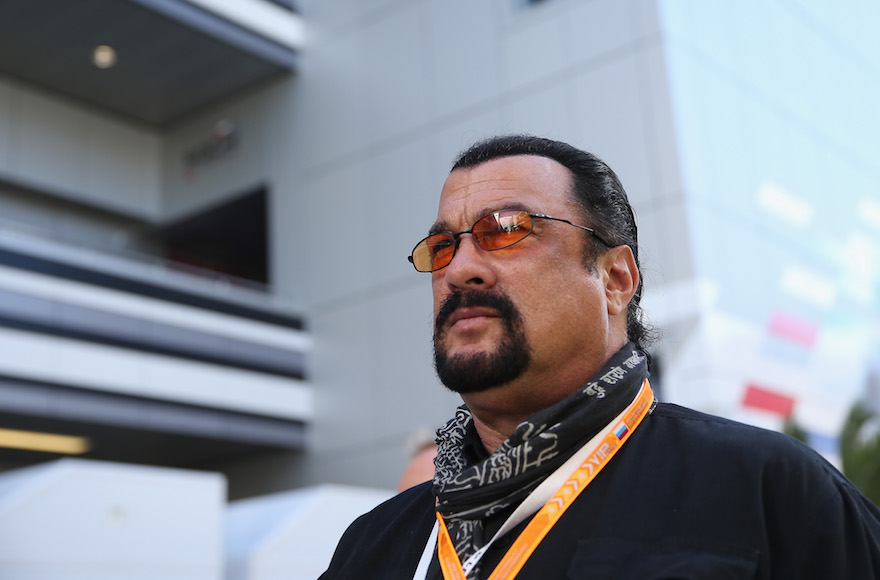 A spokesman for the Security Service of Ukraine, or SBU, confirmed the blacklisting of Seagal, a martial arts expert whose father was a Jew of Russian descent, in a statement sent last week to the Apostrophe news site.

Seagal will be barred from entering Ukraine for five years according to an SBU directive not to admit anyone it deems to have committed a “socially dangerous act, irrespective of the territory of its commission, which is contrary to the interests of ensuring the security of Ukraine,” the spokesman wrote in a statement dated May 5. It was a reply to a query about Seagal by Apostrophe from last month.

Seagal visited Crimea shortly after it was annexed by Russia in the spring of 2014. The actor, who is also a musician, performed in Sevastopol. Under Ukrainian law, visitors to Russian-controlled Crimea are committing a felony unless they receive permission from Ukraine’s government.

In November, Putin presented Seagal with a Russian passport at a news conference at the Kremlin in Moscow, calling him “one of Russia’s many friends.”

Separately, the Facebook page of an SBU general on Tuesday featured anti-Semitic statements written under his name. According to the Unian news agency, Maj.-Gen. Vasyl Vovk, the former head of the SBU’s main investigation department, recently retired to the reserves from active duty.

“I have everything against the Jews,” the text attributed to Vovk read. “You are not Ukrainians and I will destroy you and Rabinovich. Let me tell you again — go to hell, k****, the Ukrainian nation has had it with you.”