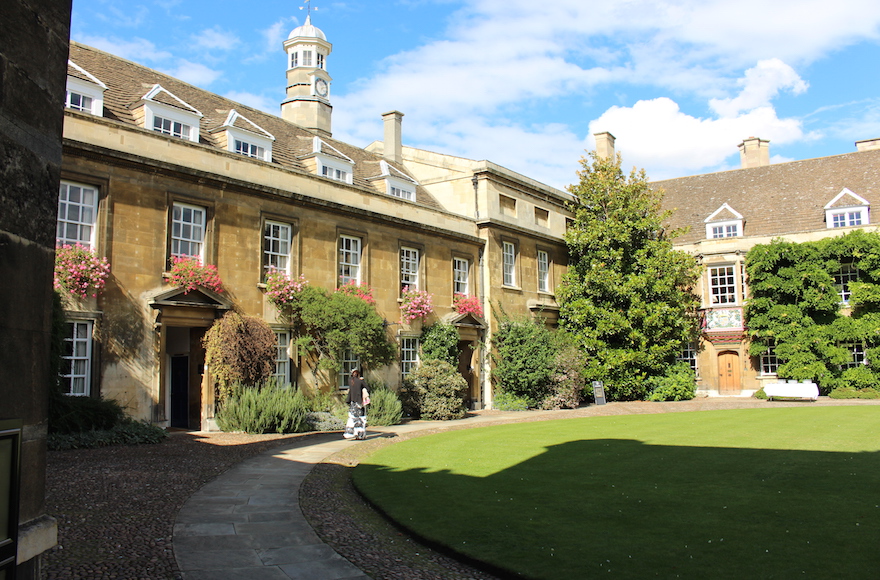 (JTA) — The head of a prestigious Cambridge college apologized to two students for “significant deficiences” in how the school handled their complaints of anti-Semitic abuse.

Jane Stapleton, Master of Christ’s College, Cambridge, said on Thursday that the College now “accepts that racist and anti-Semitic conduct occurred and has apologized to the students who reported it.” Stapleton, whose title is equivalent to dean, also announced changes to the College’s complaint-handling procedures, the Jewish News of London reported.

The two students had reported suffering racist and anti-Semitic abuse in August last year while at a College party organized by two sports clubs. The College’s initial investigation failed to identify any individual perpetrator but disciplined two students for swearing and physical aggression, and restricted the societies’ social activity. It did not uphold the students’ complaint of a hate crime.

The complainants — Shlomo Roiter-Jesner and another student who was not named in reports about the case in the British media — were left unhappy with the findings and appealed for a review.

“The Master inadvertently gave the seriously misleading impression that the reporting students’ account of anti-Semitic abuse had been rejected by the College,” it read, highlighting one of several problems. “This caused considerable hurt and dismay to the reporting students and others in the Jewish community.”

After meetings with representatives from the Board of Deputies of British Jews, the Community Security Trust and the Jewish Leadership Council, the College agreed to an independent review of its handling of the complaint.

This review revealed “significant deficiencies in College procedures,” according to Stapleton, who said: “Complainants were not invited to the College to be interviewed, the College did not explain to them how the process worked and they were not told why it had not been possible to charge any student with the anti-Semitism alleged.”

Separately, the membership in Britain’s Labour party has been discontinued for a woman who claimed that reports of the use of chemical weapons in Syria was a hoax perpetrated in part by supporters of Israel, according to a report Tuesday in the Jewish Chronicle of London.

Melanie Melvin last month wrote on Twitter: “Sarin gassing was filmed by the BBC at Pinewood at the orders of Mrs. May and the Israel Lobby.” Theresa May is the prime minister of the United Kingdom.

A Labour spokesperson told the Chronicle that Melvin is no longer a member of the party but declined to say whether she quit, had been kicked out or suspended.