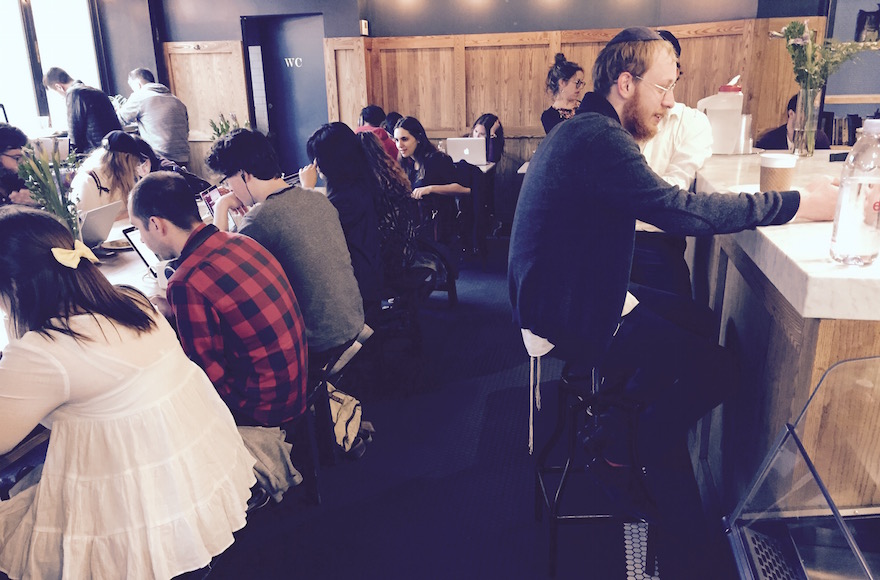 NEW YORK (JTA) — Soon after Nechama Levy moved to Brooklyn five years ago, she opened a bicycle repair shop. The spacious, high-ceilinged store was just down the street from a new pub with exposed brick walls.

Like many who have moved recently to the rapidly gentrifying borough, Levy, 33, was drawn to the area’s relatively cheap rents — at least back then — plus its bicycling culture.

Levy also ensconced herself in one of Kings County’s Jewish trends: a curated, artisanal type of liberal Judaism. Like much of brownstone Brooklyn, her neighborhood has a growing galaxy of independent prayer groups, or minyans — one of which Levy herself founded, the Brooklyn Women’s Chavurah, a women-led service.

But what makes her growing Jewish community unique is that it’s on the home turf of Chabad, perhaps the most visible Hasidic Orthodox group in the world.

Less than a half-mile away from Chabad Lubavitch’s global headquarters, 770 Eastern Parkway, is the local office of Repair the World, a progressive Jewish community service group. The Brooklyn Women’s Chavurah has met there monthly for the past year. Now Levy is downscaling the group as a new coed egalitarian service, Keter, starts up in Crown Heights this week. Other liberal groups in the neighborhood include Kavod, a quasi-egalitarian Orthodox minyan, and Grindr Shabbat, an LGBT minyan named after the gay dating app.

“There’s a very independent spirit here,” Levy said about the neighborhood. “Not only were there a number of spaces that attracted very wonderful people, but there was an ethos of ‘What do you have to offer, and what can you create?'”

Located in central Brooklyn, Crown Heights is a tranquil yet vibrant neighborhood lined with the borough’s iconic brownstones. Home to large West Indian and African-American communities, Crown Heights has been Chabad’s base since the group escaped Europe in 1940. According to the UJA-Federation of New York’s 2011 study, some 24,000 Jews lived in the neighborhood — about a fifth of its residents — with residents saying the number has since risen.

The neighborhood is most infamously known for the 1991 riots in which black demonstrators attacked Jewish residents after a black child died when he was struck by a car in the motorcade of the Chabad rebbe, Menachem Mendel Schneerson. A visiting yeshiva student was killed and several people were injured.

Today the neighborhood might be better known for its rapid gentrification, following the path of nearby neighborhoods like Park Slope, where rents rose nearly 50 percent between 1990 and 2014, or Williamsburg, where the increase for that period was close to 80 percent, according to a study by New York University’s Furman Center. The study put Crown Heights among the city’s top 15 gentrifying neighborhoods.

Independent minyans are a reflection of the spirit that has made Brooklyn home to hipster trends like matcha cafes and organic food markets. Crown Heights is one of the latest frontiers in that process of gentrification, with rents rising and new yuppie arrivals moving into lower-income minority neighborhoods.

“The reality of Crown Heights today is that it’s a vibrant, alive, Caribbean-American and African-American community,” said Cindy Greenberg, Repair the World’s New York City director, noting the neighborhood’s “small-town feel.” But at the same time, she said, “I think a lot of the newcomers feel uneasy about what it means to move into a predominantly African-American, Caribbean-American neighborhood and know that they’re part of the wave of gentrification that’s caused all these prices to rise.”

Repair the World opened its Crown Heights office two years ago precisely to recruit young Jews to volunteer amid a lower-income population that could benefit from community service, Greenberg said. Since then, it has engaged in services like emergency food relief, help with food stamps and afterschool tutoring.

But along with hosting space for community advocacy groups, the organization’s office has increasingly been a meeting place for the neighborhood’s growing ecosystem of independent minyans. While Chabad is known for its outreach to non-Orthodox Jews, its approach to observance is traditionalist Orthodox. Independent minyans tend to emphasize progressive ideas like gender equality and LGBT rights.

Though there have been some hiccups along the way — some members of the Chabad community objected to a modern Orthodox synagogue erecting an eruv, a symbolically enclosed area that allows observant Jews to carry objects on Shabbat — the fracas has blown over. Both Chabadniks and the newer Jewish arrivals say their communities get along, even if they mostly operate apart.

Sometimes the two communities cooperate. Mordechai Lightstone, who runs Chabad’s social media, invites independent minyan goers to his home for meals and, outside of his official Chabad role, sits on Repair the World’s young leadership board. 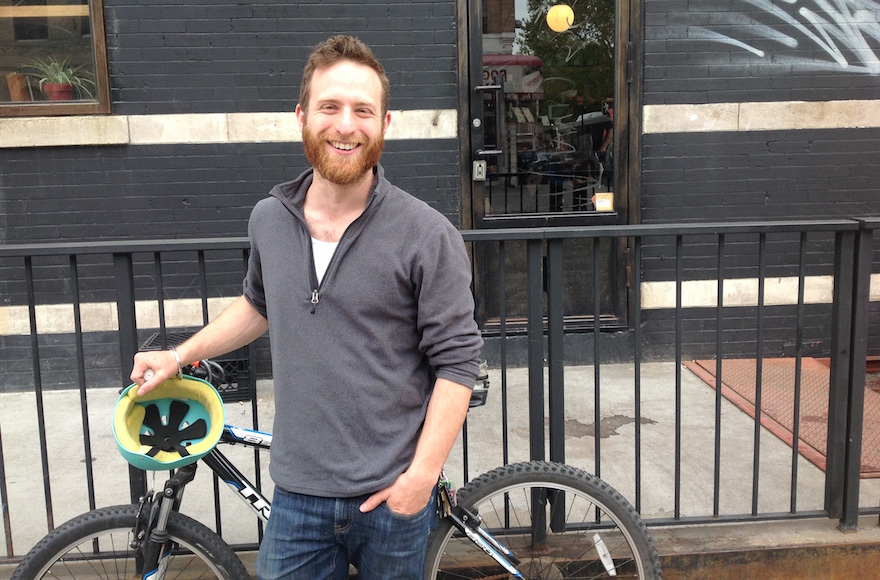 Avishai Gebler is one of the founders of the latest traditional-egalitarian prayer group in Crown Heights. (Ben Sales)

“When you speak of young Jews, the intersectionality of Jewish identity has shifted,” Lightstone said. “They no longer say I go to just this thing. They’ll go to Repair the World and do social justice stuff and then they express themselves Jewishly, but when they want a Shabbat meal they go to Ari Kirschenbaum or go to me.” Kirschenbaum heads Chabad Heights, a synagogue and community center serving Brownstone Brooklyn.

Ben Weiner, a fellow at Repair the World, welcomes the Chabad teenagers who come to his office on Fridays asking if he wants to put on tefillin. On a Friday before Passover, after laying the ritual leather straps on his arm, Weiner invited the teenagers to volunteer at a Repair the World event that educated local children — Jewish and non-Jewish — about the holiday. The teens agreed.

“Whenever I’m around, I like to have them wrap tefillin and engage the conversation to get a little view into what their community does and what they believe in,” said Weiner, 23, a recent graduate of the University of Pittsburgh. “I wasn’t sure they would come. I was really happy they did, and were willing to give that additional perspective, knowing that different customs would be taught that day.”

Young Jews who are new to Crown Heights say the neighborhood’s diversity and open attitude makes them feel free to express themselves spiritually.

“It was the first time I experienced a Jewish community that I felt a part of, that reflected my social justice values and religious values,” said Malkah Nadoff, 27, a Chicago native who moved to Crown Heights in 2014. “One thing that stands out to me is that there are people with different levels of observance that share community and share space. There’s no pressure around someone being too religious or someone not being religious.” 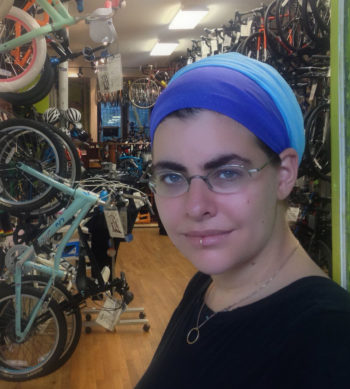 Nechama Levy, who participates in a few Crown Heights independent prayer groups, is involved in another Brooklyn trend: Her bike shop, Bicycle Roots, is also in the neighborhood. (Courtesy of Levy)

Still, the newer communities are experiencing some growing pains. Residents recognize not all the minyans can survive. Levy, the bike shop owner, wonders how much the Women’s Chavurah will stay active now that a new egalitarian Saturday morning service has popped up. Rising prices in Crown Heights, along with the transience of prayer groups without physical infrastructure, make the future of all the groups tenuous, said Avishai Gebler, one of Keter’s organizers.

Plus, he said, while the young liberal Jewish community is active, it’s not all that big. Most of the groups draw a few dozen people.

“We talk about the growth of the community — we’re talking about 30 people — but it’s growing,” Gebler said. “As things grow, it does feel different. That’s the nature of any startup effect. I do wonder about the sustainability of this community. It’s expensive. What’s the model? Is the model to have like lots of different minyanim, piecemeal?”

The leadership of groups are in transition — Reform rabbinical student Matt Green, for example, who founded Grindr Shabbat, has shifted his focus to a new project: Brooklyn Jews, a service with musical instruments — prohibited in traditional Shabbat services — and non-kosher food.

“There are an extensive number of non-traditional Jews, secular Jews, Jews that appreciate a guitar on Shabbat,” Green said of his Brooklyn Jews, which draws close to 100 people at some meetings.

Lightstone said the gentrification that’s come along with the new arrivals has made conditions difficult for longstanding Crown Heights families. But he added that if the newcomers engage with existing residents, and get to know their cultures, they are welcome in the neighborhood.

“I don’t think anyone is doing something wrong by moving here,” he said. “If you’re moving to Crown Heights and have a respect for people here before you, and you have the history they have, as long as you do that, you’re doing the best you can.”