This Israeli film about Orthodox Jews is a surprise hit overseas 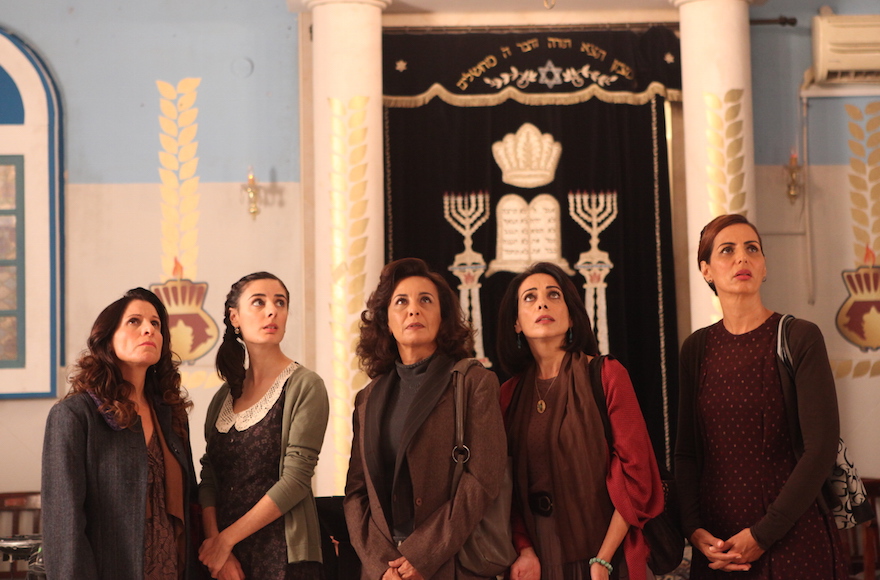 (JTA) — It’s safe to call the Israeli film “The Women’s Balcony” the opposite of a Hollywood blockbuster.

The movie, directed by Emil Ben-Shimon, is a sensitive, slice-of-life story that focuses on the rift caused in a modern Orthodox community in Jerusalem when a Hasidic rabbi offers to fill in for the congregation’s leader, who is traumatized when his wife is hurt in an accident. When the new rabbi urges the men in the congregation to embrace a more strictly religious lifestyle, they buy in and ask their wives to dress more modestly and adhere more closely to the words of the Torah.

But the men’s wives rebel after initially being conflicted by the changes.

The production is unassuming: There is no fancy camerawork, no huge twist, no laugh-out-loud moments, no sex and no violence (although there is some yelling — it is, after all, a movie about Israelis).

Yet the movie is a breakout hit in its native country and also is succeeding overseas. In Israel, it sold more tickets than any other Hebrew-language film last fall and into this year. In a country of some 7 million people, selling 100,000 tickets puts a film in the blockbuster category. As of March, “The Women’s Balcony” had sold 400,000.

The film, which has enjoyed a wide release and positive reviews in Spain, will be distributed to theaters in Turkey and across Latin America. Based on its performance in a pre-release in two small U.S. markets — it has earned a total of $275,000 in Southern California’s Orange County and in South Florida — the film’s distributor, Menemsha Films, expects “The Women’s Balcony” to rake in well over $1 million in box office sales here once it is released in New York City on May 26. After New York, the film will be shown in the top 25 other markets across the country.

Its success in Israel — where there’s a public debate about how much influence the stringently Orthodox Chief Rabbinate should have over myriad aspects of life, from marriage to public transportation — is a bit of a no-brainer. But its international success has less obvious roots. After all, even Jews could have trouble keeping up with the religious references (a minyan, or group of 10, is needed for Orthodox prayer; a mikvah is a ritual bath) and questions (is it ever acceptable to use a Shabbos goy, a gentile who can perform certain during Shabbat?).

First-time screenwriter Shlomit Nehama told JTA that she has been astonished by the success outside Israel.

“I was sure this was a very local story that no one who doesn’t understand the local culture would identify with,” she wrote in an email translated from Hebrew.

“The Women’s Balcony” is a religious, feminist parable — albeit a nuanced one. The story is set in motion when the women’s balcony of the synagogue — an elevated section where the women sit at services, separating them from the men — collapses during a bar mitzvah ceremony. The men of the congregation, entranced by the Hasidic rabbi’s passionate sermons, initially acquiesce to his wishes to use the money raised to fix the damage to buy a new (and presumably holier) Torah scroll. The rabbi also arranges for the building of a more separate and restrictive women’s section — an enclosed box where the balcony used to be.

The women in the film, led by the formidable Ettie (played by Evelin Hagoel), don’t take the new rabbi’s meddling lightly. In order to get the kind of women’s section they want, some threaten to leave their husbands.

This isn’t a paean to egalitarianism, since the women’s section is not abolished. Rather the women are just fighting to keep the status quo.

The story is inspired by Nehama’s childhood in Jerusalem. She grew up in a similar community but left as more and more Hasidic families moved into her neighborhood. She is no longer religious — mainly because of what she calls “religious mediators” who attempt to frighten people in the name of religion — but respects the concept of a women’s balcony.

“I see the concept of a women’s balcony as a very charming thing,” Nehama said. “The women looking at the men from above the heads of the men. Like in the gallery of a very respected theater.”

Perhaps that gentle attitude toward the traditions of a religious community — rather than dogma from the right or left side — speaks to the film’s unlikely success outside of Israel’s modern Orthodox community.

In The Jerusalem Post, movie critic Hannah Brown found the story to be a “throwback to a kinder, gentler time, when communities were closer.”

“The clothing all seems to be contemporary, but there are no cellphones around,” Brown wrote. “When there is an event to be celebrated — a bar mitzvah, a holiday or a wedding — the entire group heads out to the synagogue, located in one of Jerusalem’s older neighborhoods. There are none of those garish event halls that people tend to use these days, and the women prepare the food themselves; no one goes into debt paying for huge catered meals.”

“It sounds paradoxical, but it’s often true that the more culturally precise a foreign language film is, the more universal its appeal becomes,” he wrote in his March review of the movie.

In the end, the secret to the success of “The Women’s Balcony” may be that the filmmakers don’t attempt to include any outside or political debates about religiosity. The well-crafted result — a confident, true-to-life portrait of a small community in all of its complexity — is a valuable outlier in a world in which religious practice is increasingly polarized.