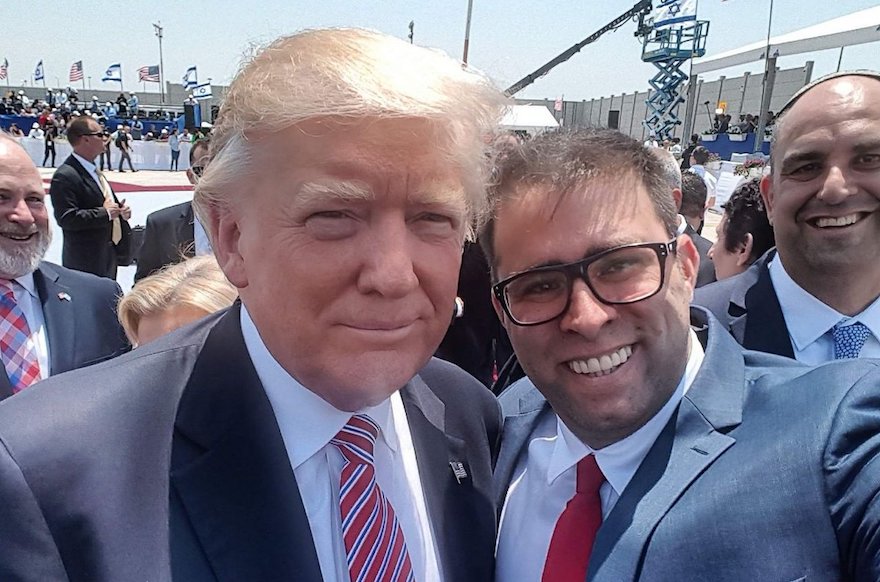 Undeterred by the prime minister, who is also the head of his Likud party, Hazan quickly posted the photo to Twitter, writing, “Thank you, Mr. President — it was my pleasure!” Hazan has more than 16,000 followers, but only follows Trump.

Thank you, Mr. President
– it was my pleasure! 😊@realDonaldTrump pic.twitter.com/0TMFzluPN3

Earlier in the day, Hazan tweeted: “Mr. President, welcome to Israel! I’m expecting your call, we have some issues to discuss about.”

Hazan is a longtime admirer of Trump and has bragged that they have similar political styles. He endorsed Trump early in the Republican presidential primaries. Soon after the tapes of Trump bragging that he could sexually assault women made headlines, Hazan suggested people forgive the then-Republican candidate for Yom Kippur.

He could likely relate. Hazan has been accused of sexually assaulting female employees at a bar he owned in Tel Aviv, doing drugs with and procuring prostitutes for guests at a casino he managed in Bulgaria, physically assaulting an official in his West Bank hometown and making fun of a fellow Knesset member for being disabled — twice. He denied the alleged crimes and apologized for the insult.

Trump flew into Israel from Riyadh, Saudi Arabia, as part of his first foreign trip as president. He will meet privately with Netanyahu and Palestinian Authority President Mahmoud Abbas, between whom he has said he hopes to broker “the ultimate deal.” After welcoming remarks by Netanyahu and Israeli President Reuven Rivlin, Trump took the podium and said his visit to the region is a “rare opportunity” to bring peace and stability.

“But we can only get there working together. There is no other way,” he said.

Later, Trump made his way down a reception line of dozens of Israeli officials, shaking hands with each one while Netanyahu waited. Hazan was not supposed to be in the line, to which even government ministers reportedly were added at the last minute, but managed to find an opening. His moment of glory was heavily covered in the Israeli media, with officials anonymously expressing dismay and calling for him to be punished.

Last year, Hazan told The Jerusalem Post he was like Trump in that “The politicians and media laughed at him and made him into a clown. But in the end, the people are voting for him because he says what they think out loud.”