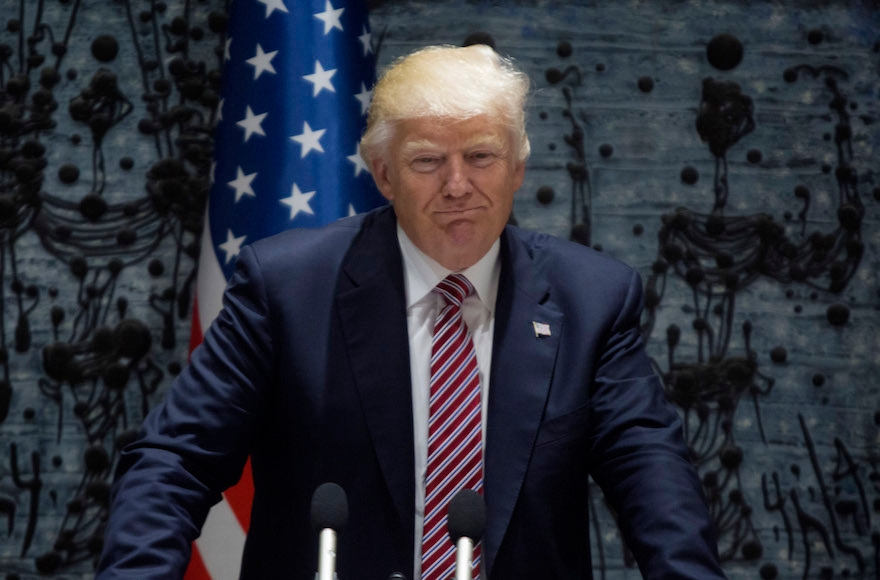 (JTA) — Jewish groups praised President Donald Trump for calling on Muslim nations to confront Islamist extremism during a speech to Muslim and Arab leaders at a summit in Saudi Arabia.

“Honestly confronting the crisis of Islamist extremism and the Islamist terror groups it inspires means standing together against the murder of innocent Muslims, the oppression of women, the persecution of Jews and the slaughter of Christians,” the president also said in what was billed as a major address to the Arab world.

David Harris, chief executive officer of the American Jewish Committee, said that “President Trump’s refreshing honesty is welcome and needed in describing the Islamist extremist threat that developed in the Middle East years ago, and spread across the region and around the world. We agree that the fight against Islamist extremism is a battle between the forces of good and decency, on the one hand, and evil and a death cult, on the other, and that victory depends, above all, on what Arab and Muslim nations do to counter and defeat this violent, deadly scourge.”

“And he could not have been clearer in his description of Hezbollah and Hamas as the terrorist groups they most assuredly are,” Harris also said.

Trump in his speech called Hamas a terror group, leading to this response from the group that controls Gaza: “The depiction of Hamas as a terror organization by Trump makes clear the American bias on behalf of the occupation, and is aligned with the enemy’s policies.”

Klein said his organization was pleased that Trump strongly condemned Iran, that he condemned “ISIS, Hezbollah and Hamas and Iran in the same sentence – for they are all part of the same scourge of Islamist terror.”

“However, the president should have demanded that Muslim leaders and religious leaders should likewise condemn and delegitimize these terrorist groups by name. The president should have insisted that Muslim leaders end the use of the problematic textbooks throughout the Muslim world promoting Islamist extremism and violence and urge that they examine why terrorism emanates from some Muslim societies,” he said.

“It was also disappointing that the president did not mention the refusal of much of the Muslim world to negotiate with and accept Israel as a Jewish state.”

B’nai B’rith in a statement issued Sunday evening praised Trump for calling on Arab nations to join in the fight against Islamic terrorism and for “challenging the Arab world to unite in confronting Iran — the largest state sponsor of global terror.”