Trump calls for coalition against extremists, insists Israel and Palestinians ready for peace in Jerusalem speech 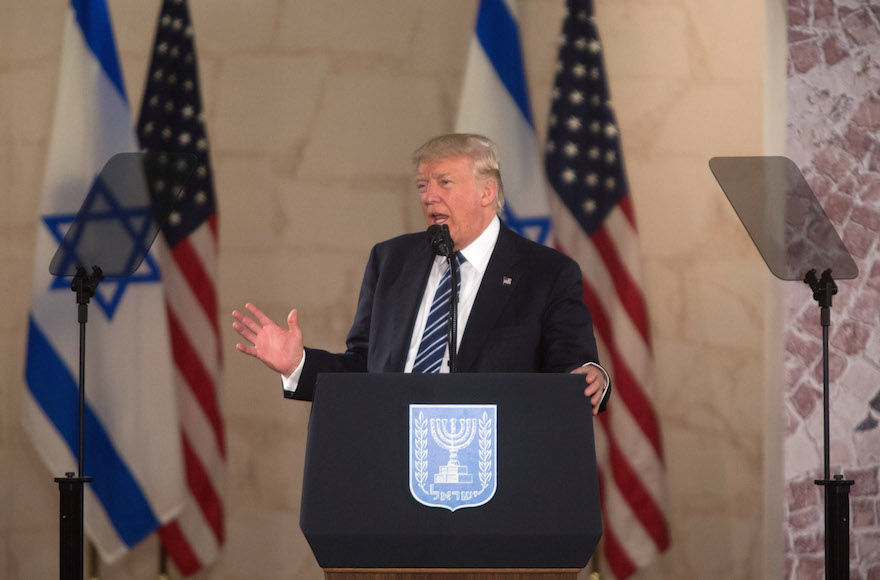 President Donald J. Trump delivering a speech during a visit to the Israel Museum in Jerusalem, May 23, 2017. (Lior Mizrahi/Getty Images)
Advertisement

JERUSALEM (JTA) — President Donald Trump in the major address of his visit to Israel called for a coalition of nations to fight against extremism and insisted that both Israel and the Palestinians are ready for peace.

Trump was greeted with an extended standing ovation on Tuesday afternoon by a small audience of Israeli lawmakers and guests at the Israel Museum in Jerusalem, and his speech was punctuated by applause.

“Conflict cannot continue forever,” he said. Trump called for a coalition of partners of the nations of the world “who share the aim of stamping out extremists,” and said diverse nations can unite around such a goal.

Such a coalition, the president said, “requires the world to recognize the vital role of the State of Israel.”

Trump praised the history of the Jewish people as “a story of faith and perseverance.” He added that Jews in Israel are free to do whatever they dream, and that “Muslims, Christians and people of all faiths are free to live and worship according to their conscience” there.

“I call upon people to draw inspiration from this ancient city to set aside our sectarian differences to overcome oppression and hatred,” he said.

Trump acknowledged that Israel and Jews throughout the world are targeted by Hezbollah, Hamas, Islamic State and Iran, who the president said “will not have nuclear weapons.”

“Iran calls for the destruction of Israel. Not with Donald J. Trump,” he said.

Trump asserted that both Israel and the Palestinians are ready to pursue a peace agreement and reiterated his “personal commitment” to helping them achieve that goal.

“I’m telling you, that’s what I do, that the Palestinians are ready to reach for peace,” Trump said, adding “My friend Benjamin, he is ready for peace, he is reaching for peace,” referring to Netanyahu.

“Making peace will not be easy. But with determination, compromise and the belief that peace is possible, Israelis and Palestinians will reach a deal,” he said.

Trump called America’s security cooperation with Israel “bigger than ever,” and a difference from the Obama administration.

Trump was set to leave later Tuesday afternoon on his way to the Vatican.