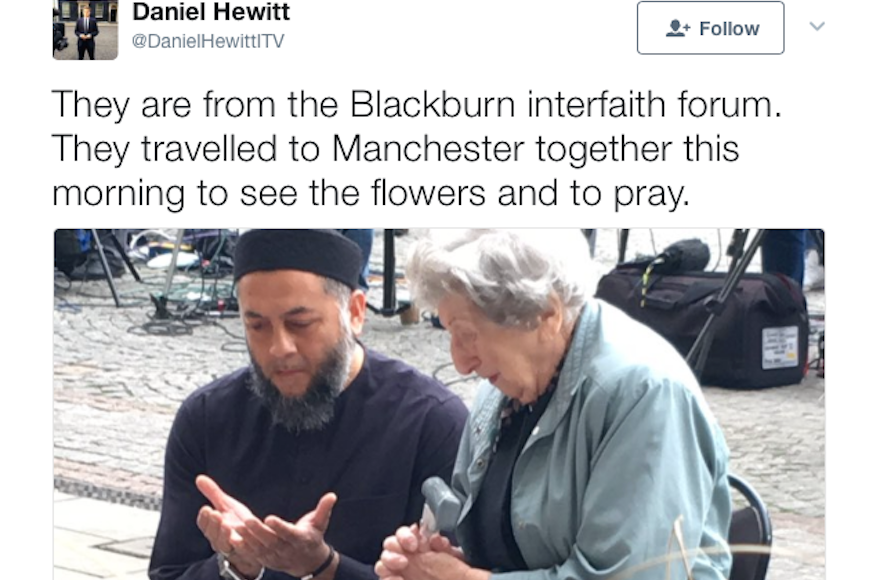 A Muslim man and a Jewish woman mourning the victims of a suspected terror attack that left at least 22 dead in Manchester, May 24, 2017. (Screenshot from Twitter)
Advertisement

(JTA) — A touching moment offered a glimmer of hope in Manchester, where a bomber killed at least 22 people on Monday in a terror attack at a concert.

On Wednesday, Renee Black, a 93-year-old Jewish woman, traveled to the British city with Sadiq Patel, a Muslim man, from the nearby town of Blackburn to mourn the victims.

The pair were captured on video and in photos talking and joining in prayer next to a makeshift memorial in Albert Square, in the city’s center.

A beautiful moment in Manchester. Renee Black, 93, and Sadiq Patel, praying together in Albert Square. She is Jewish, he is Muslim. pic.twitter.com/domRfClHTa

They are from the Blackburn interfaith forum. They travelled to Manchester together this morning to see the flowers and to pray. pic.twitter.com/vNU8FWvcJ8