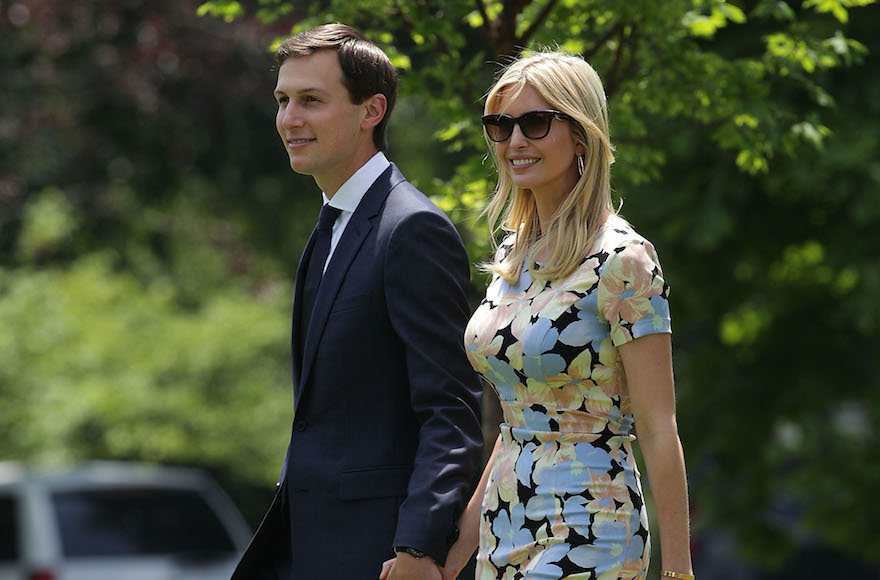 Jared Kushner and Ivanka Trump on the South Lawn prior to their departure from the White House, May 19, 2017. (Alex Wong/Getty Images)
Advertisement

It wasn’t Haskel Lookstein, who oversaw the First Daughter’s conversion to Judaism.

It wasn’t Marvin Hier, who gave the invocation at President Donald Trump’s inauguration.

It wasn’t Levi Shemtov, the spiritual leader at the synagogue in Washington, D.C., that Jared Kushner and Ivanka Trump have attended.

And it wasn’t Shmuley Boteach, the celebrity rabbi who has lavished praise on the president and taken a series of selfies with his advisers.

Those rabbis, on the record, denied giving their stamp of approval to the Friday night flight to Saudi Arabia — though none of them criticized the decision, and all refrained from commenting on it.

Rabbi Hirschy Zarchi, who ran the Chabad at Harvard, where Kushner was active as a student, was unavailable for comment.

Flying in an airplane is one of many activities prohibited by Jewish law from sundown Friday to nightfall Saturday, principally because igniting the engine involves lighting a fire. Shabbat’s laws can be broken, however, to save a life, a concept known in Hebrew as “pikuach nefesh.”

The question — much debated on social media by both fans and detractors of Trump’s daughter and son-in-law — is whether participating in Trump’s first foreign trip as president qualifies as life-saving. (Some of the discussions were respectful inquiries into Jewish law. Others were, let’s face it, pure snark of the “frum-shaming” variety.) Observant Jews with political power have faced questions like these for ages — most famously, perhaps, Sen. Joe Lieberman of Connecticut and Jack Lew, President Barack Obama’s treasury secretary.

When dealing with the fate of a nation, how far does pikuach nefesh stretch?

“If a person would be in that circumstance, with that level of responsibility, it’s not just that isolated event he has to calculate,” said Rabbi Menachem Genack, CEO of the kosher division of the Orthodox Union, an umbrella Orthodox group. “He’d have to think not just about this event. What are the consequences down the line? The definition of pikuach nefesh might be broader than it usually is.”

Genack and Shemtov both cited Israeli officials who were given permission to pick up the phone — also prohibited — to give or receive directives on Shabbat, even if the call was not directly related to military operations. Likewise, religious Israeli soldiers will continue serving on Shabbat when necessary, even during (relative) peacetime.

Shemtov, who runs the Washington synagogue commonly known as TheShul, generally has a narrow definition of saving a life. He will give elected officials who consult with him permission to break Shabbat laws only if they are personally needed in the situation, it cannot be deferred until Saturday night and someone’s life is actually at stake.

He also said there is no blanket answer for this question; it must be dealt with on a case-by-case basis.

“I’ve been getting questions like this for about 20 years, and I’ve only found it appropriate twice to allow any exemption from the rules,” Shemtov said. “They involved immediate and unequivocal situations affecting preservation of life.”

Shemtov recalls walking miles with Lieberman from synagogue on Shabbat to the Capitol, where Lieberman would cast votes. Lew also endeavored not to break Shabbat, but told Tablet that he would take calls and drive in a car when necessary.

As it happens, Kushner and Trump also reportedly received permission ahead of Trump’s inauguration on a Friday, Jan. 20, to ride in a car that night. Which rabbi gave that allowance? That’s also unknown. But every rabbi that JTA spoke to for this article cautioned against criticizing these decisions without being privy to all of their details.

“What’s at stake long term or short term?” Genack wondered. “You never know what the next steps will be. I’m happy that I’m not in that situation, that I have to deal with these problems.”