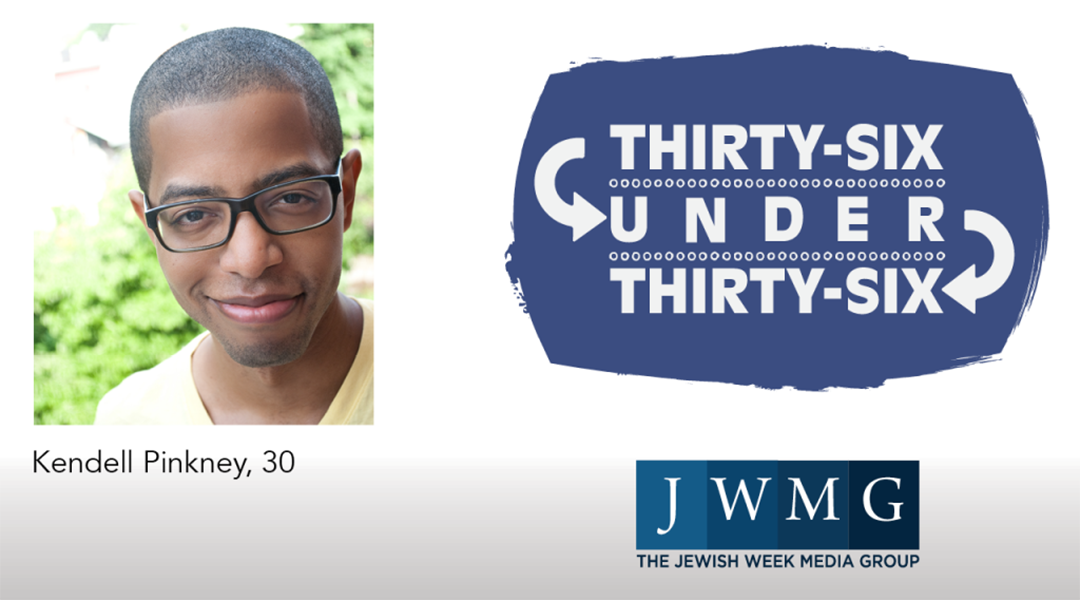 A native of the Dallas area, a childhood member of an evangelical Christian “black mega-church,” Kendell Pinkney was a member of a youth choir whose director chose Adon Olam, the Hebrew hymn, as part of the singers’ repertoire. “We didn’t get the chets [the guttural letter] right,” he said. The director explained the words’ meaning. That, and the music, “piqued my curiosity,” Pinkney said.

More than two decades later, after he left Christianity and spent a year at Hebrew University and embarked on an intensive study of Judaism, Pinkney is a Hebrew-speaking, kipa-wearing, kosher-keeping, brocha-making convert about to enter rabbinical school at the Jewish Theological Seminary.

And he is a founder and associate producer of Kaleidoscope Jews, a troupe of storytellers who relate the experiences of Jews from various non-Ashkenazic, non-white backgrounds. The performers’ audiences usually are Ashkenazic and white. The project earned him a spot as one of the inaugural URJ JewV’Nation Fellows, a year-long fellowship in New York City that supports emerging leaders develop innovative Jewish outreach initiatives.

“No one else” is concentrating on the story-telling aspect of minorities within the Jewish community, said Pinkney, who majored in Jewish studies at Oberlin College, works as a Hebrew school teacher, tutor and youth group leader, and lives in Brooklyn’s Prospect Heights neighborhood. “It’s not ghettoizing” himself and fellow Jews of color, he said of Kaleidoscope’s work — rather, it’s expanding Jews’ understanding and acceptance of each other.

He’s now at work on a video about his conversion experience.

Pinkney, who graduated from New York University’s Graduate Musical Theatre Writing Program, was a member of the Union for Reform Judaism’s Youth Professionals Community of Practice as well as a fellow at the LABA Laboratory for Jewish Culture.

As a rabbi, Pinkney said he hopes to work on a college campus. Now, as part of his “daven-hopping” practice, he attends worship services at several nearby synagogues. Adon Olam, sung at the end of most Shabbat services, remains one of his favorites. “I always look forward to it,” he said.

Voracious reader: Pinkney’s favorite books are “Ruth,” the Torah’s archetypal convert; Edgar Keret’s “Suddenly, a Knock on the Door,” the Israeli writer’s collection of short stories; and the script of Thomas Stoppard’s “Arcadia,” about the relationship between past and present.