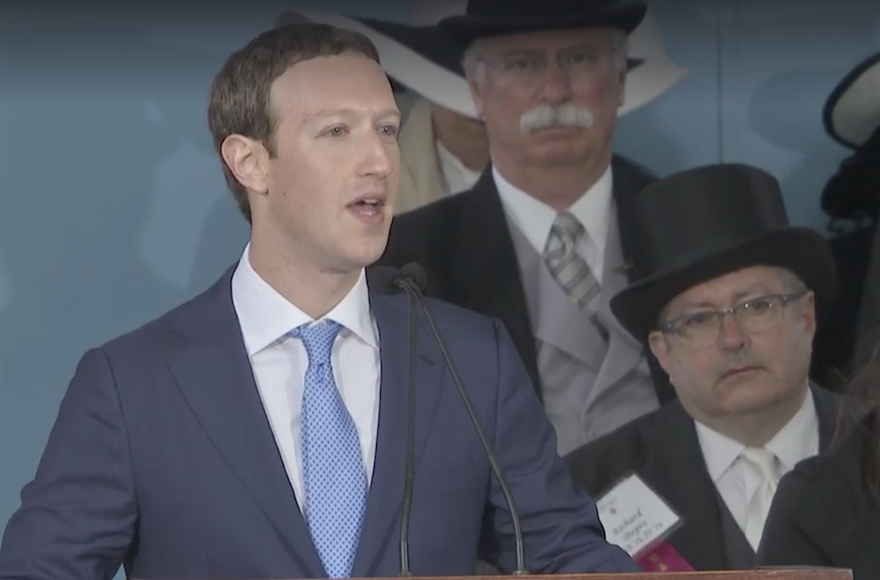 (JTA) — Mark Zuckerberg’s commencement speech at Harvard on Thursday was so, well, Zuckerbergish.

Self-deprecating references to not having completed Harvard? Check.

Parent-deprecating jokes about their gimlet-eyed view of his success? Check.

A rousing call to the students to commit social justice? Check.

A recitation of the Mi Shebeirach prayer? Ch–

Zuckerberg closed the commencement by saying that he draws strength from the Jewish prayer traditionally used as a plea for healing.

He pronounced its name in Hebrew but did not describe its conventional use. He appeared to cite the translation by Rabbi Drorah Setel of Rochester, N.Y., set to music by the late composer Debbie Friedman.

“As we sit here in front of Memorial Church I’m reminded of a prayer, Mi Shebeirach, that I say whenever I face a big challenge, that I sing to my daughter thinking of her future when I tuck her in at night,” he said. “And it goes, ‘May the source of strength, who’s blessed the ones before us, help us find the courage to make our lives a blessing.’ I hope you find the courage to make your life a blessing.”

Zuckerberg also joked about his nebbishy beginnings (ignored because he turned up to his first Harvard class with a T-shirt inside out and backwards) and his meet-cute first encounter with his wife, Priscilla Chan (whom he described as “the most important person in my life”).

(Was that the rain she wiped from her eyes?)

They met in line for the loo at a party. Convinced he was about to get the Harvard boot (he wasn’t), he said: “I’m getting kicked out in three days, so we need to go out on a date quickly.”

He took shots at “The Social Network,” the 2010 movie that chronicled his rise. (“FaceMash,” the prank website he created with other Harvard classmates, was not the basis for Facebook, he said, debunking one of the movie’s assertions.)

He called out his parents for not, perhaps, taking enough pride in his post-college career.

“I swear, getting into Harvard is the thing my parents are most proud of me for,” he said and looked to the audience. “My mom is nodding!”

“Every generation expands the circle of people we consider part of us,” he said, “and in our generation that includes the whole world.”