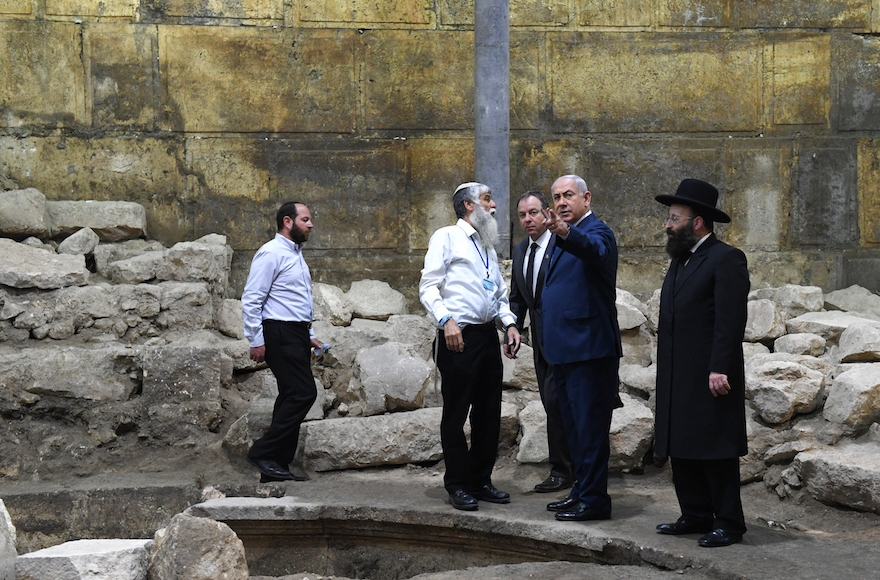 Israeli Prime Minister Benjamin Netanyahu gesturing in the Western Wall tunnels before the start of a special weekly Cabinet in Jerusalem, May 28, 2017. (Kobi Gideon/GPO)
Advertisement

JERUSALEM (JTA) — Israel’s Cabinet held its weekly meeting in the Western Wall tunnels to mark the 50th anniversary of the reunification of Jerusalem.

“In this place King Solomon built the First Temple. In this place, the Babylonian exile built the Second Temple and after the destruction of the Second Temple, this place was the focal point of the longing of our people for generations,” Prime Minister Benjamin Netanyahu said Sunday at the start of the meeting. “Thousands of years passed, the people of Israel returned to their land, established their state and built their united capital.”

During the meeting, the Cabinet approved a plan to build an elevator from Jerusalem’s Jewish Quarter to the Western Wall that would allow more accessibility for handicapped people to the holy site. The Cabinet also approved the construction of a cable car to the Dung Gate near the Western Wall in the Old City from the center of the city.

The elevator and a pedestrian tunnel at its foot is estimated to cost $14 million.

The Cabinet also approved a five-year budget to develop the area around the Old City and to improve health, culture, welfare and education services in the city of Jerusalem, including eastern Jerusalem.

The Ruderman Family Foundation praised the Cabinet decision to build the elevator and make the Western Wall more accessible to people with disabilities.

“The Government of Israel made the right decision today to make Judaism’s holiest site, the Western Wall, accessible to people with disabilities by voting to build an elevator and passageway,” said Jay Ruderman, president of the Ruderman Family Foundation, in a statement. “For far too long, these ever-important sites were not completely accessible for people with disabilities, who account for twenty percent of the population. This decision will now ensure freedom to worship for all.”

Tourism Minister Yariv Levin praised the approval of the cable car, which he said would make the Western Wall more accessible to the 130,000 visitors to the site each week. The cable car, which will be operational by 2021, will be able to serve up to 3,000 people per hour.

“The future cable car will change the face of Jerusalem, allow easy and convenient access for tourists and visitors to the Western Wall and will serve as an exceptional tourist attraction. There is no more appropriate and exciting time than this – 50 years since the reunification of Jerusalem – to launch this revolutionary project,” he said in a statement.