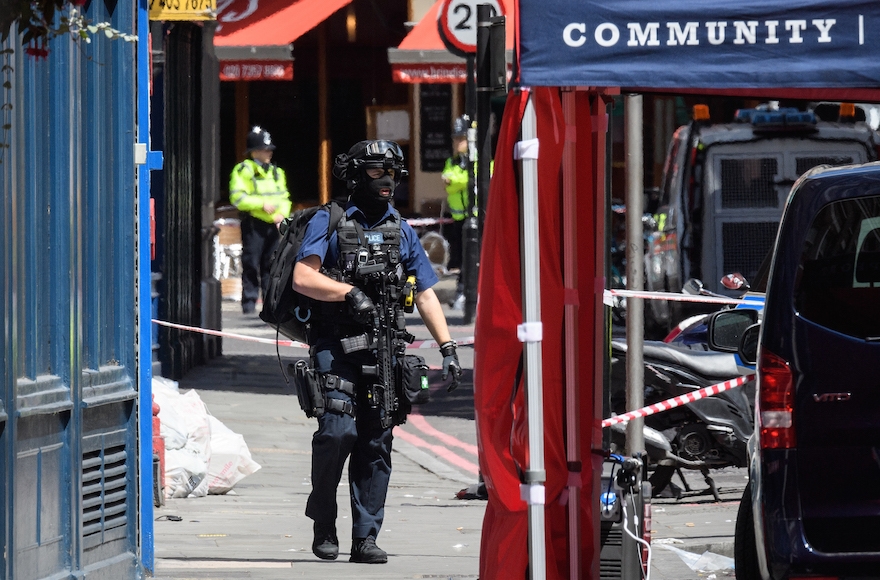 (JTA) — British Chief Rabbi Ephraim Mirvis called on his countrymen to remain committed to the values of peace and tolerance in the wake of a terror attack in London that left at least seven people dead.

A white van rammed into pedestrians on London Bridge Saturday night. Three men reportedly exited the van and began stabbing the bystanders on the bridge and in Borough Market near the bridge. The attackers were shot and killed by police.

“In the wake of yet another attack, of more loss of life and of more families devastated by terror, every one of us will once again feel the now too familiar sense of horror and helplessness. After Westminster and Manchester we stood together defiant. Yet it seems the terrorists believe that where they have previously failed to poison our communities, with their destructive ideology of hatred and prejudice, they can succeed with still more bloodshed and murder. But we must not let them,” Mirvis said in a statement on his Facebook page.

“We will not be cowed or intimidated nor will we allow our commitment to the values of peace and tolerance to be diminished. In the face of every attack, however devastating, we must continue to cleave ever closer to these values because ultimately they are what will defeat the evil of terror,” he continued.

Eyewitnesses told the BBC the stabbers shouted, “This is for Allah,” as they attacked.

The head of the Board of Deputies of British Jews, Gillian Merron, in a statement condemned the attack and praised the emergency services who came to the aid of the injured. “People of all faiths and none must come together to defeat this evil,” she said

The European Jewish Congress expressed “horror and sadness” over the attack.

“Unfortunately, once again London has been hit at its very center by a barbarous and repugnant terrorist killing spree. This strike, timed for just before the general elections, was meant to cower and instill fear in a great democracy,” Moshe Kantor, president of the EJC, said in a statement.

“However, we saw the resilience of the British people last night and we know it will continue as the government and police will do its utmost to find those behind these slayings.”

It is the third terror attack in the United Kingdom in as many months. In March, a car ramming and knife attack in Westminster left five people dead, and two weeks ago a bombing outside of an Ariana Grande concert in Manchester killed 22 people, including young fans.

A benefit concert by Grande and several heavy-hitting music stars scheduled for Sunday night in Manchester will go on “with greater purpose. After the events last night in London, and those in Manchester just two weeks ago, we feel a sense of responsibility to honor those lost, injured, and affected,” Grande’s manager, Scooter Braun, said Sunday morning in a statement.

“We plan to honor them with courage, bravery, and defiance in the face of fear. Today’s One Love Manchester benefit concert will not only continue, but will do so with greater purpose. We must not be afraid and in tribute to all those affected here and around the world, we will bring our voices together and sing loudly. “