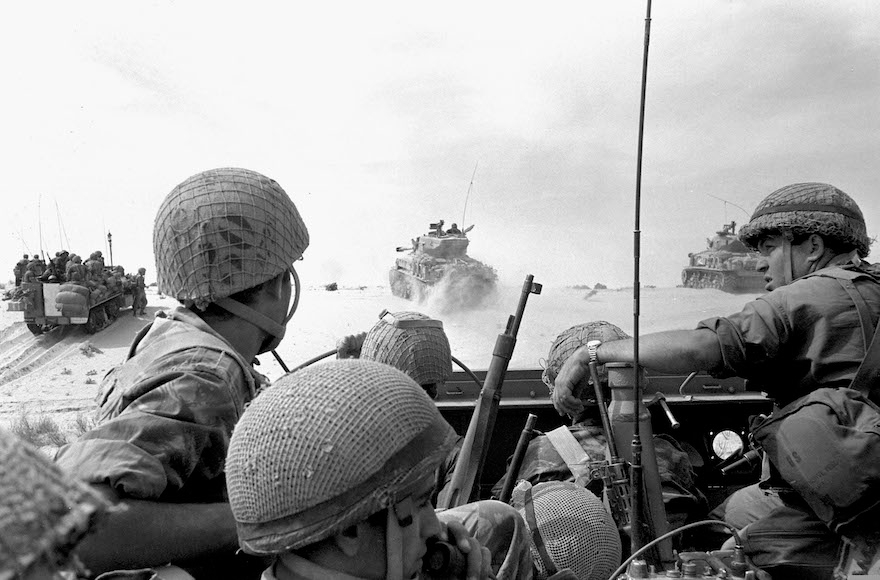 Israeli troops adavancing against Egyptian troops at the start of the Six-Day War on June 5, 1967, near the southern Gaza Strip town of Rafah. (Micha Han/GPO via Getty Images)
Advertisement

NEW YORK (JTA) — If you’ve been reading the opinion pages of America’s major newspapers recently, you probably know the Six-Day War broke out 50 years ago this week.

The war’s broad, profound and lasting effects have been rehashed time and again: Israel decisively defeated its Arab enemies, vastly expanded its territory, gained control of Judaism’s holiest sites and began its ongoing occupation of the West Bank. More than a few articles have noted that the purportedly brief war has, in some senses, lasted five decades.

There has been no shortage of op-eds by familiar names that largely repeat the traditional talking points of the Palestinians, the pro-Israel left or the pro-Israel right — unabashedly condemning the war or celebrating Israel’s victory; mourning the occupation, denying its existence or absolving Israel for its persistence; providing a blueprint for a better future.

Here are six pieces that challenge those narratives, or that highlight fresh aspects of the war and its influence. Most of them are also from voices that tend to be heard less often in public discussions of foreign policy in the U.S. — women, younger writers and Palestinians.

The settlements are normal now

Discussions of the West Bank settlements tend to depict them as geographically and even culturally distinct from Israel proper. But as it turns out, most Israelis don’t know where the settlements end and Israel’s pre-1967 borders begin. In this fascinating dive in the Washington Post into what life today is like in the West Bank, reporter Dan Ephron shows how, 50 years after Israel took control of the West Bank, many settlements are more like middle-class suburbs than rugged outposts.

But the truth is that most settlers now live in middle-class communities that would feel familiar to suburbanites anywhere in America, with single-family homes, strip malls and cul de sacs. One of the homes I stayed in, a two-story structure with a chiseled facade in the settlement Ofra, had a small swimming pool in the yard. In Dolev, I spent the night in a wood cabin with a loft and a hot tub. The Airbnb entry for the cabin touted a nearby horse ranch and bicycle rentals …

Most settlers who offer their homes on the site don’t mention that their communities exist outside Israel’s internationally recognized borders (“15 minutes drive from Jerusalem,” as one put it).

Have Palestinians become more religious since the war?

How did Israel’s conquest of the West Bank and Gaza change Palestinian religious life? Maysoon Zayid, a Palestinian-American comedian and writer, says some Palestinians have opposed Israel with more assertive displays of faith, while others remain secular. In Gaza, she writes, Hamas’ Islamist regime has constrained Palestinians’ religious freedom, while the West Bank is more religiously diverse.

Zayid’s essay is one of several in this Atlantic feature on how the war changed the three major monotheistic religions.

In 1967, it wasn’t odd to see women strolling in miniskirts in Palestine. It also wasn’t odd to see my grandmother standing next to her wearing a floor-length, long-sleeved, cross-stitched dress and a long silky veil covering her hair.

Some say that Palestinians have become more religious than they were when they were first occupied … The sense that shrines like the al-Aqsa mosque in Jerusalem and the Church of the Nativity in Bethlehem are under siege has, it seems, strengthened some Palestinians’ religious enthusiasm. Ramadan and Christmas have always been a big deal, but as Palestinians fight for their existence, the festivities have gotten even grander.

Before the war, these American Jews were leftists — now, they’re Israeli settlers

American Jews are disproportionately represented in Israel’s settler population. While American immigrants comprise just five percent of Israelis overall, they make up 15 percent of settlers. In “City on a Hilltop,” a new book on Americans in the settlement movement, Oxford professor Sara Yael Hirschhorn describes how many American settlers began as 1960s left-wing activists.

This recent interview with Hirschhorn is part of 50 Voices 50 Years, a project that gathers 50 different perspectives on the war.

The most interesting finding in my research though was about the politics of this group. Contrary to the popular conception, these people were not neoconservatives or right-wing in their politics in the United States. These were “tree-hugging hippies” who were involved in and certainly aware of the leftist social movements of the 1960s and 1970s — the Civil Rights Movement, the anti-Vietnam campaign — who moved to the Occupied Territories as a way of continuing their activism — but in the sense that this time they wanted to pursue Jewish civil and human rights and turn inward in their rights campaign.

How the Six-Day War led to the Arab Spring

Part of the reason the war’s anniversary is getting so much attention is that its effects reverberated far beyond Israel’s tiny slice of land. The war shook the countries that lost, destabilizing their governments and shifting alliances in the region. In this essay, also part of 50 Voices, Brookings Institution fellow Tamara Cofman Wittes posits that the war allowed the United States to become the dominant force in the Middle East. Decades later, popular discontent led to a backlash against the dictators who benefited from their alliances with the U.S.

There is a direct line from the outcomes of the 1967 war… to the regional order that came after. Egypt’s turn from the Soviet Union to the West, the historic 1977 visit of Sadat to Jerusalem, and the 1979 Camp David Peace Accords cemented a new Middle East that was dominated and protected by American military and diplomatic leadership, and that served interests of the United States, Israel and America’s Arab partners pretty well.

That Middle Eastern order is what fell apart in the violence that followed on the Arab uprisings of 2011. The grievances that drove the Arab uprisings were in large part due to the failures and repression of the Arab leaders that prevailed under that order.

Since the war, Israelis have swung to the left …

One trope that colors coverage of Israel today is that the country is shifting to the right. And while that may be true in certain respects, on the question of territorial concessions Israelis have shifted left since the war. This analysis in the Forward by Israel Democracy Institute President Yohanan Plesner shows that Israelis are today much more willing to entertain ceding the West Bank than they were in 1967.

While many point to 1967 as the high-water mark of “liberal Israel,” after which public sentiment hardened, the reality is much more complex … One conclusion from the data is that the readiness of the Israeli public to make concessions for peace has grown over time. In June 1967, following the war, over 90 percent of Israelis supported holding on to Jerusalem’s recently captured Old City “at any cost,” and more than 80 percent said the same regarding the West Bank. Contrast this with today’s numbers, which consistently show that a majority of Israelis favor a two-state solution, including territorial concessions.

… and Palestinians have felt abandoned, but emboldened

Palestinians traditionally refer to the Six-Day War as the “Naksa,” or setback. In this piece, University of Maryland professor Shibley Telhami, an Arab Israeli, says the war both galvanized the Palestinian national movement and led to a decline in Arab states’ support for the Palestinians. Understanding that they would be unable to defeat Israel, Arab countries, Telhami says, grew accustomed to the status quo, leading Palestinians to take responsibility for their national aspirations.

The shocking defeat of Arab forces by Israel led to three outcomes that had particularly strong impacts on the Palestinian issue. The first is a creeping Arab sense that Israel wasn’t about to disappear. The second is that, in occupying Syrian and Egyptian sovereign territories, Israel acquired direct levers with those states, possessing assets that they wanted back even more than helping Palestinians. The third is that Palestinians, disillusioned by Arab governments after Israel occupied the West Bank and Gaza, decided to take things into their own hands.