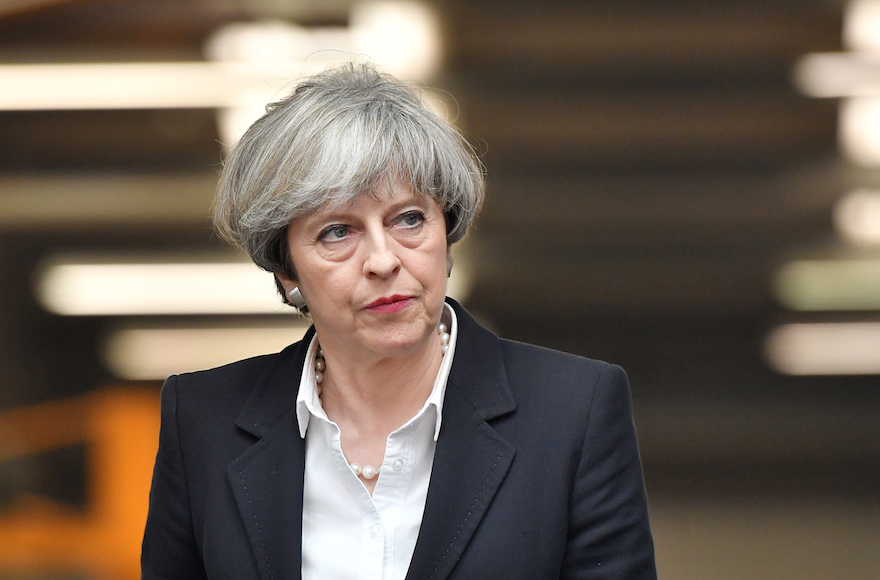 (JTA) — A banner portraying Prime Minister Theresa May wearing a Star of David earring was removed following accusations of anti-Semitism.

The large banner had hung in the city of Bristol in southwest England before it was removed on Tuesday. It depicted May, of the Conservative Party, surrounded by negative words and phrases, facing Labour leader Jeremy Corbyn, surrounded by positive ones.

May could be seen wearing a blue Star of David earring, and one of the words surrounding her was “Balfour,” presumably referencing the Balfour Declaration, the 1917 declaration declaring England’s support for a Jewish homeland in Palestine. Jewish Bristol residents told newspapers that they found the poster anti-Semitic.

Prior to removing the banner, one of the organizers behind the banner said that the Star of David symbolized the English government’s relationship with Israel and was not meant to be anti-Semitic.

“What we are doing with that symbol – it’s an earring – is a reference to Theresa May’s government’s relationship with Israel. It is a critique of her foreign policy, rather than against religion,” Nina Masterson told The Bristol Post.

Masterson added: “I’m definitely not an anti-Semite. I have Jewish friends, and my half brother and sister are Jewish.”