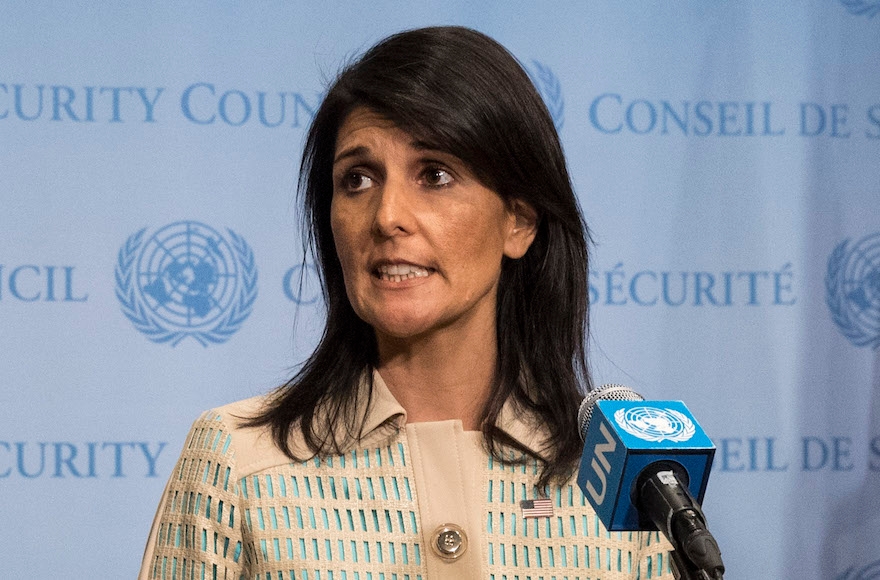 Nikki Haley at a press briefing before a meeting of the United Nations Security Council in New York, May 16, 2017. (Drew Angerer/Getty Images)
Advertisement

WASHINGTON (JTA) — Nikki Haley, the American ambassador to the United Nations, said the U.S. is considering its membership in the U.N. Human Rights Council, citing among other things its bias against Israel.

In a speech Tuesday to the council in Geneva, Haley cited Israel as one of several factors leading the United States to reconsider its membership. Another is the membership of human rights abusers like Venezuela, Cuba, China, Burundi and Saudi Arabia.

“It’s hard to accept that this council has never considered a resolution on Venezuela and yet it adopted five biased resolutions in March against a single country – Israel,” Haley said. “It is essential that this council address its chronic anti-Israel bias if it is to have any credibility.”

Haley added: “The United States is looking very carefully at this council and our participation in it. We see some areas for significant strengthening.”

The George W. Bush administration also cited Israel bashing and the presence of human rights abusers when it pulled out of the U.N. Commission on Human Rights, the predecessor of the current council. The Obama administration rejoined, in part to defend U.S. interests.

Later Tuesday evening, in a separate speech, Haley proposed an amendment to the process by which member nations are chosen to make the council “more effective, more accountable, and more responsive.”

“America does not seek to leave the Human Rights Council. We seek to re-establish the council’s legitimacy,” Haley said.

Haley is scheduled to visit Israel later this week.