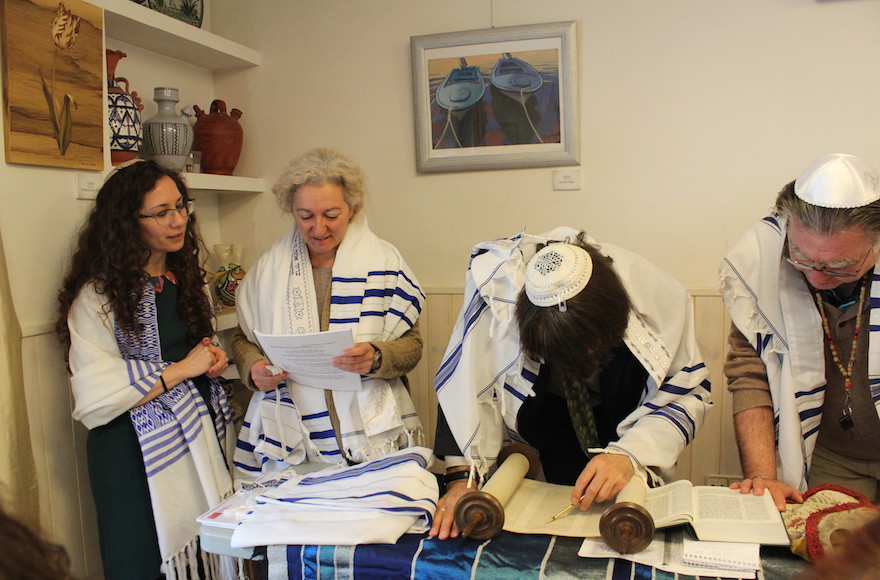 MADRID (JTA) — At the conclusion of a recent Friday night service at the Reform Jewish Community of Madrid, the space quickly transforms from a meeting hall into a dining room. Several people assemble a long table. They adorn it with a white tablecloth, place chairs on both sides and set two challahs topped by a cover in the center.

Men and women lay out plates of knishes and bourekas, shakshuka and kugel, a Spanish tortilla and an almodrote, a Sephardi eggplant dish. When the table is set, everyone gathers around for the Kiddush prayer. A monthly communal Shabbat dinner begins.

While such a scene may be typical at Jewish communities across the U.S., in Spain it is something of a rarity. The existence and evolution of a progressive congregation, as Reform congregations are typically known outside the U.S., is a departure from the city’s traditionally Orthodox-dominated Jewish life. For the people gathered around the Sabbath table it’s a welcome development, one the Spanish capital needed for some time.

The Reform Jewish Community of Madrid — the only Madrid congregation affiliated with the European Union for Progressive Judaism — was founded three years ago by four women: Yael Cobano, Ruth Timon, Keren Herrero and Leidy Andrade. They’re the “núcleo duro,” the hard core, as Timon, the synagogue’s treasurer, calls them. Since 2014, the congregation has grown from a gathering of a some 20 regulars to a viable community of 26 families, complete with a rabbi, a Torah and a host of cultural and educational events, from Hebrew classes to book clubs.

Across Europe, there are fewer than 200 active congregations practicing progressive forms of Judaism — and just six of them are in Spain.

“Spain has been one of [our] three key emphases for the last five years or so,” said Leslie Bergman, the immediate past president of the European Union for Progressive Judaism. At least four more Reform congregations are in the works, he added, and he expects a national federation of Spanish Reform communities to open by the end of this year.

“[We saw] the possibility of a community model that’s inclusive, happy, where you can have a Jewish identity of the 21st century,” she said, pointing to the Reform movement in the U.S. and U.K., as well as to Bet Shalom, the 10-year-old Progressive Jewish Community of Barcelona.

A large part of that “modern” model is egalitarianism and inclusiveness. The founders, all female, have led the congregation and women lead Shabbat services. The members come from Panama, Colombia, Venezuela, Argentina, Brazil and Israel. Additionally, members of Madrid’s LGBTQ community, people who come from interfaith families and those at various stages of conversion have found their Jewish home here.

There are about 50,000 Jews in Spain; 10,000 of them reside in Madrid. At the time when the “nucleo duro” formed, Jewish life in the city — although quite developed for a country that dispensed with its Jews more than 500 years ago — was limited to the main Orthodox synagogue, a handful of smaller Sephardic Orthodox synagogues, Chabad and the Masorti (Conservative) Bet-El congregation. 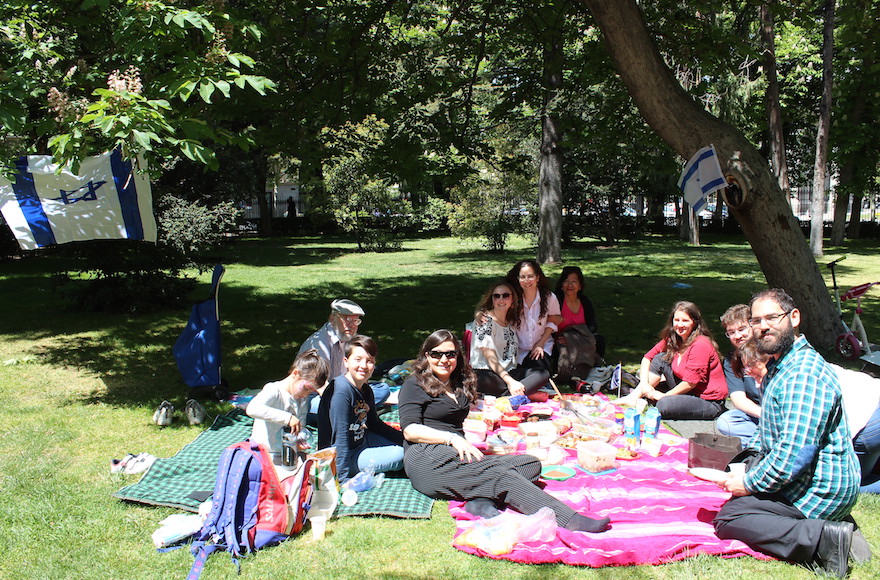 “There was no pluralistic alternative to look at Judaism from other perspectives, and especially, the liberal [one],” said Cobano. “Where a woman’s role would be different from what existed until now — for example women officiating [at services], a community open to the society, contributing as ‘Spanish Jews,’ and open to [ideas] of social justice, in a sense of wanting a better society for everyone — including the Jews, but not only.”

When the congregation first formed, it met in a small space rented from a local wine shop. “We didn’t even know if we were going to be able to pay the rent that first Kabbalat Shabbat,” Timon recalled.

The event was a success, and many more monthly Shabbat services followed — each one accompanied by a potluck dinner. As the word spread, the congregation soon outgrew the space and found a home in a building with flexible hours and a kitchen.

The kitchen plays a crucial role — communal Shabbat meals are central to the life of the congregation. “Staying for dinner [and] sitting down at a table [together] has always been connected with [us],” said Cobano. “It creates community, family spirit, links, audacious hospitality.”

Eighteen months in, in the fall of 2015, the community decided to bring in a rabbi, as study of texts was important to the congregation’s members. Plus, the community realized that hiring the only non-Orthodox rabbi in Spain would be a draw for those intrigued by progressive Judaism.

To reduce expenses, the congregation teamed up with Barcelona’s Bet Shalom to hire a full-time rabbi that the two communities could share.

With the financial assistance of EUPJ, the congregations found a French-speaking American rabbi who was willing to relocate to Barcelona from Paris. Since then Rabbi Stephen Berkowitz has learned enough Spanish to lead services — although often with Cobano’s help — and he visits Madrid once a month. Berkowitz divides his time between the two during the High Holy Days and he’s available for Jewish lifecycle events as well as ongoing pastoral support.

“It’s a privilege to be a part of the current Jewish cultural and religious revival in Spain,” Berkowitz told JTA in an email. “It is also a great honor to both teach and accompany individuals eager to deepen their involvement in the Jewish tradition through the approach of Progressive Judaism. The Reform Community [of Madrid] offers a unique community spirit which is warm, creative and participatory.”

The congregation also recently got its first Torah — albeit on a temporary basis. As part of the EUPJ’s Torah-lending initiative, they received the scrolls last year. The community will need to return it in 2018, however, to make it available for the next small progressive Jewish community.

What happens next? “We’ll keep looking,” Cobano said. “We cannot afford [a Torah] ourselves yet but perhaps there is a community out there, either in the U.S. or the U.K., that would help and give us one.”

Although now more established — with both the Torah and the rabbi — the Reform Community of Madrid remains true to its roots. Women continue to lead services, their doors are open to those in search of their Jewish origins and members are involved in Madrid’s social justice work.

This last aspect – interactions with city’s non-Jews — is somewhat anomalous in Madrid, where Jewish communities are often seen as closed. The Reform congregation has participated in an event for refugees at the Madrid Central Mosque, given presentations to non-Jews about Jewish spirituality and has taken part in a collection of groceries for Madrid’s Food Bank. They are also beginning to collaborate with a restaurant that’s helping to feed the homeless.

Members of the congregation cite the inclusivity and the communal atmosphere as the reasons they joined. “My inclusion in the Reform Jewish Community of Madrid has a primordial place in my life,” says Liliana Levy, a member. “Without these experiences [my life] wouldn’t be what it is today. Each of its members is essential. Why not another community? Simply because [here] I feel at home.”

Cobano agrees. “Nowadays people want to live their Jewish identity in a more cheerful manner, [with] more culture, more knowledge,” she said. “They come because they see [our] community as more friendly, more open — like a model with ‘more’ of everything.”