Smoking is making a comeback in Israel 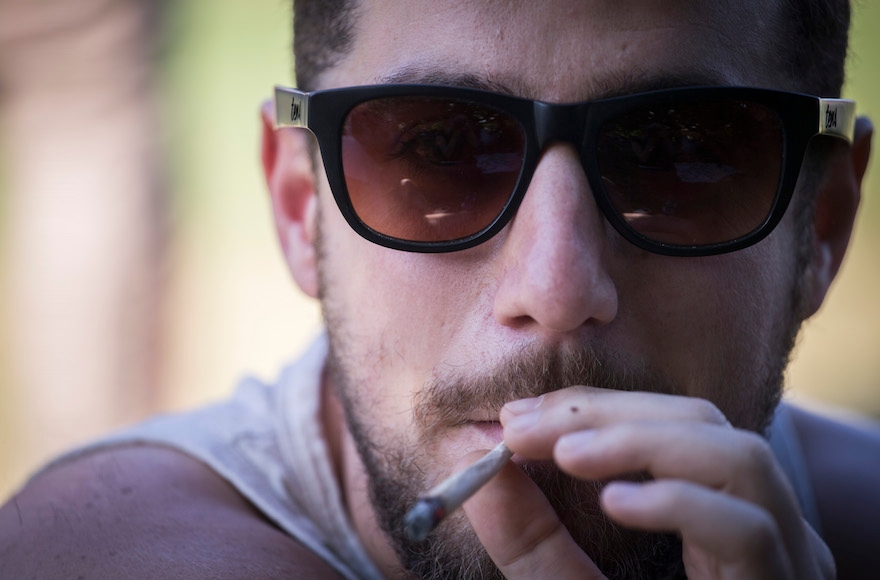 Smoking in Israel is on the increase, partially due to lower taxes on loose tobacco. (Hadas Parush/Flash90)
Advertisement

TEL AVIV (JTA) —  Israel has one of the highest life expectancies in the world — 82.5 years, on average. But a surprising increase in smoking rates may threaten that status.

In line with with global trends, the smoking rate in Israel fell from about 45 percent in the early 1980s to about 20 percent or less in the years since 2011. However, in its annual report on smoking released last week, Israel’s Health Ministry recorded the biggest single-year setback in more than a decade, with the rate rising to 22.5 percent in 2016 from 19.7 percent the previous year.

“This is unheard of in the developed world,” Leah Rosen, who heads Tel Aviv University’s Health Promotion Department, told JTA. “There’s an epidemiological curve of tobacco use, and as people start to get sick from smoking, the [smoking] rate starts going down, and it never goes back up. We have now broken that trend.”

Health professionals and anti-smoking activists have long been sounding the alarm about smoking in the Jewish state — the decline of the national smoking rate had slowed before 2016. And while numerous factors are likely in play, many have accused the government of not taking the threat seriously enough.

Smoking is one of the leading causes of death in Israel, and has been shown to kill up to half of smokers. According to the Health Ministry, approximately 8,000 Israelis die each year for reasons linked to smoking, among them 800 non-smokers exposed to secondhand smoke inhalation. The Jewish state’s new smoking rate is comparatively high — ranking 28 out of 35 European countries, according to the World Health Organization. Europe has the highest rate of any region of the world.

In the Health Ministry report, Health Minister Yaakov Litzman acknowledged “a decline in efforts” to combat smoking and pledged to introduce a package of new measures to reverse the upward trend.

“The increase in smoking rates, which brings Israel back above the 20 percent mark, demands that the healthcare system reexamine its policies for coping with tobacco products and whether to allocate more resources to contend with the problem,” he said.

About 15 percent of Americans smoked in 2015, according to the U.S. Centers for Disease Control.

Litzman, a member of the haredi Orthodox United Torah Judaism party, has recently come under fire for hindering some efforts to curb cigarette advertisements and for opposing regulations that would require manufacturers to put warning images on cigarette packages, saying, “it’s not aesthetic.”

In January, reporters for Israel’s Channel 2 TV station, posing as agents for a company that imports electronic cigarettes, paid thousands of shekels to a go-between to schedule meetings with Litzman and the Health Ministry’s head of public health services. The undercover reporters were assured on camera that no legislation restricting the sale of e-cigarettes in Israel was expected.

Although e-cigarettes are not tobacco products, they often contain nicotine and other chemicals that could pose health risks to users.

At the time of the Channel 2 report, a Health Ministry spokesperson said Litzman had not been aware of the payments and that he has a well-known “policy of keeping his door open to any person or organization or company that wishes to see him.”

Rosen said Israel should introduce additional warnings on cigarette packages, as well as strict limitations on how tobacco can be marketed and where it can be used. The report Health Ministry report showed that tobacco companies spend more than 60 million shekels ($17 million) a year on marketing, while the ministry only spend 500,000 shekels ($140,000) on anti-smoking advertising.

One of the most impactful policy changes, Rosen said, would be to close a loophole in the taxation of cigarettes — which allows for loose tobacco to be taxed at a rate lower than pre-rolled cigarettes.

But a growing number of Israelis have started smoking loose tobacco, which costs about 43 percent less than buying the same amount of tobacco in a pack, according to Israeli daily Haaretz.

Elad Sheffer, an activist with the anti-smoking group Clean Air, said it was nonsensical to tax loose tobacco at a lower rate.

“There is no case in terms of health or economics because cheaper cigarettes aren’t any less dangerous than expensive ones,” he said in a 2015 policy statement.

Amit Farag, a 24-year-old waitress in Tel Aviv, told JTA she started smoking in high school. She switched to hand-rolled cigarettes a few years ago, at the end of her army service, because packs had gotten too expensive.

Still, she and most of her friends would prefer to smoke Marlboros, she said.

“When they can have a regular cigarette they want to,” she said. “Sometimes I still take a box from my parents, and it’s like, yeah, I have a box, and it’s nice.”

If rolled cigarettes cost as much as packs, she would have to quit, she added. It’s still something she plans to do “one day” because “we all know it’s bad for us,” she said.

Yehuda Glick, a Knesset member for the ruling Likud party, said he recently sent a letter to the Finance Ministry, which formulates the budget, requesting a boost in the tax on loose tobacco, but was told no increases were being introduced for now. Glick said he personally brought up the matter with Prime Minister Benjamin Netanyahu last week, and he said he would look into the matter.

In the meantime, Glick is working on a bill to reduce smoking among Israelis under the age of 21, since many young Israelis begin smoking in high school or during their army service.

Rosen agreed that Israel’s anti-smoking policies should focus on young people. Although Israel last year enacted a ban on smoking at educational institutions, she said it needs to be better enforced. The Health Ministry found that 24.8 percent of males and 14.9 percent of females were smoking by the time they began their mandatory military service after high school.

A study Rosen spearheaded in January found that by the time they were discharged from the army, 40 percent of men and 32 percent of women smoked — a 42 percent increase over the course of service. The good news, Rosen added, is that as one of Israel’s most powerful institutions, the army is in a position to get Israel back on the wagon.