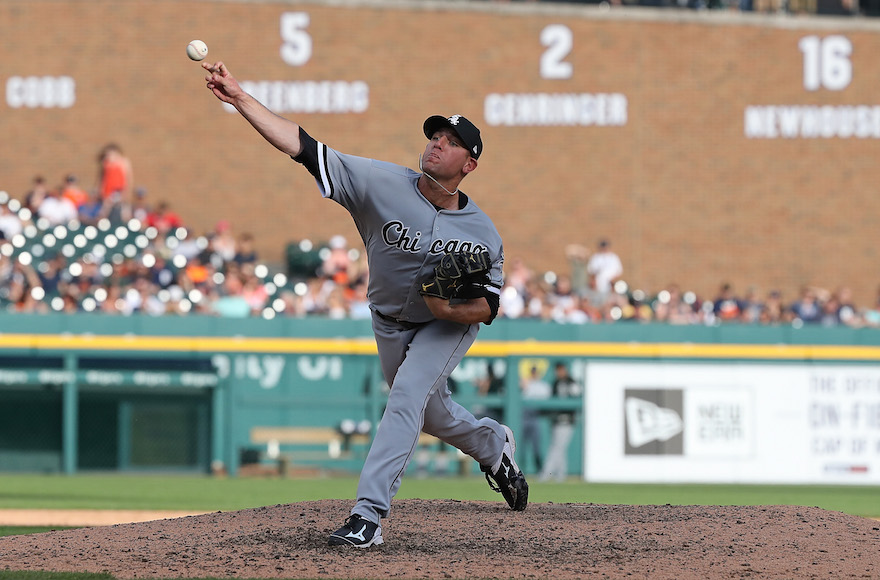 Brad Goldberg pitching for the Chicago White Sox during a game against the Detroit Tigers at Comerica Park in Detroit, June 3, 2017. (Leon Halip/Getty Images)
Advertisement

(JTA) — Relief pitcher Brad Goldberg, who is Jewish, made his Major League Baseball debut with the Chicago White Sox.

Goldberg, 27, was called up from the minors, the Triple-A Charlotte Knights, over the weekend, after pitcher Michael Ynoa was placed on the 10-day disabled list with a right hip flexor strain.

Goldberg pitched part of the eighth inning against the Detroit Tigers on Saturday, allowing four runs on a walk and three hits.

He was drafted by the White Sox in the 10th round of the 2013 MLB draft, after ending his college baseball career at Ohio State University in Columbus.

Goldberg left this year’s spring training with the White Sox to pitch for Team Israel in the second round of the 2017 World Baseball Classic in March. The Israeli team was eliminated from the tournament after the second round, with a loss to Japan in Tokyo.

Goldberg was born in Cleveland and grew up in the heavily Jewish suburb of Beachwood.