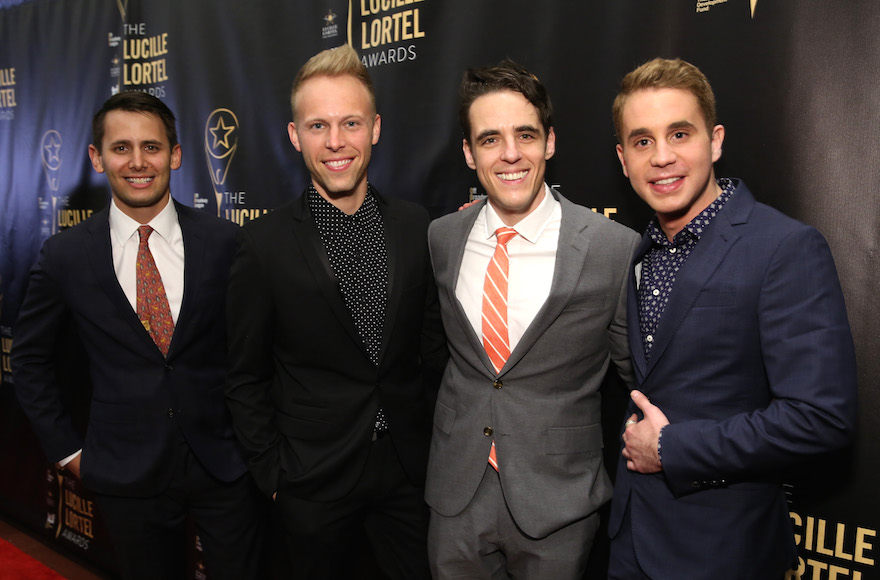 (JTA) — This Sunday is the biggest night of the year for theater lovers: It’s the Tony Awards.

Unfortunately, our crystal ball is at the shop for repairs — so we can’t say with certainty who the winners will be. But there’s one thing that’s for sure: The past year has been a standout one for Jewish actors, characters and writers who are plying their talents on the Great White Way.

From a play about Israeli-Palestinian peace talks to a Broadway legend playing a Jewish cosmetics doyenne, here are seven shows with Jewish connections and themes that we expect to win big at the 2017 Tony Awards, which air Sunday evening on CBS. 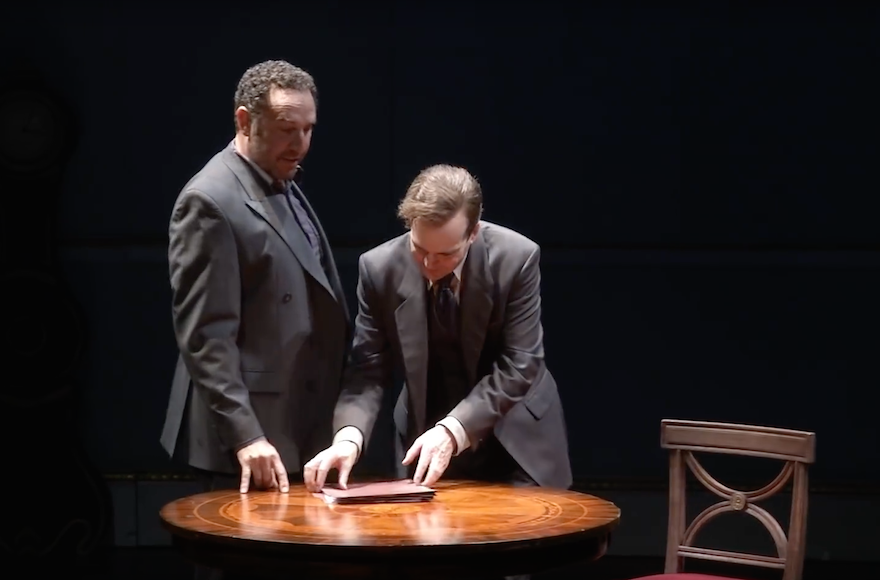 The play, in which Israelis and Palestinian negotiators  —  including Uri Savir, played by Michael Aronov, who is nominated for Best Featured Actor in a Play — struggle to hammer out a peace deal, received rave reviews for turning a complicated history into a fast, entertaining three hours. What’s particularly impressive is how riveting “Oslo” is — even though it’s common knowledge how the peace talks ended.

Another Best Play nominee, Paula Vogel’s “Indecent,” may lack the momentum of “Oslo” — but also tells a very Jewish story. The play recounts the bumpy journey to Broadway of Shalom Asch’s controversial Yiddish play “God of Vengeance.” Seemingly ahead of its time, the 1906 play featured a love story between two women — one a prostitute and the other the teenage daughter of a religious man — and while it found success in Europe, the cast was arrested in New York for obscenity when the production moved uptown.

The play is also nominated for Best Direction of a Play (Rebecca Taichman) and Best Lighting Design (Christopher Akerlind).

Despite the nods, the play has been struggling to sell tickets: Vogel recently tweeted, “Please buy a ticket soon to ‘Indecent,’ asking your support. This show is the best I got in me. Want to share while we can.”

Please buy a ticket soon to Indecent, asking your support. This show is the best i got in me. Want to share while we can.

“Falsettos” may have closed in January, but this musical about neurotic Jews came away with five nominations, including Best Revival of a Musical.

The musical revolves around a selfish but likable man, Marvin, who tries to navigate relationships with his ex-wife, his boyfriend, his psychiatrist and his son, Jason. The second act takes place two years after the first, and centers around both AIDS and a bar mitzvah, which, in the play’s moving conclusion, Jason holds in a hospital room.

Brandon Uranowitz — the only “Falsettos” cast member who is Jewish  — is up for Best Featured Actor in a Musical, alongside one of his costars, Andrew Rannells, who may be best known as Elijah from Lena Dunham’s “Girls.” (The other nominees are Christian Borle for Best Lead Actor and Stephanie J. Block for Best Featured Actress.)

If we’re lucky, maybe they’ll open this year’s award ceremony — hosted by Kevin Spacey — with a rendition of the musical’s opening number, “Four Jews in a Room Bitching.” That’s a fitting description of Tony night at my house.

It’s so nice to have our favorite Jewish diva, Bette Midler, back on Broadway where she belongs — and almost everyone agrees.

As Dolly Gallagher Levi in “Hello, Dolly,” Midler has received nearly unanimous raves and is receiving multiple standing ovations a night, both during and after the show, and now she’s nominated for Best Lead Actress in a Musical. And while competition in this category is heavy on theater royalty — see: Christine Ebersole and Patti LuPone — it’s unlikely that anyone will beat the Divine Miss M, who plays a matchmaking meddler enlisted to find a wife for wealthy Horace Vandergelder (played David Hyde Pierce, also nominated), fully intending to marry him herself. 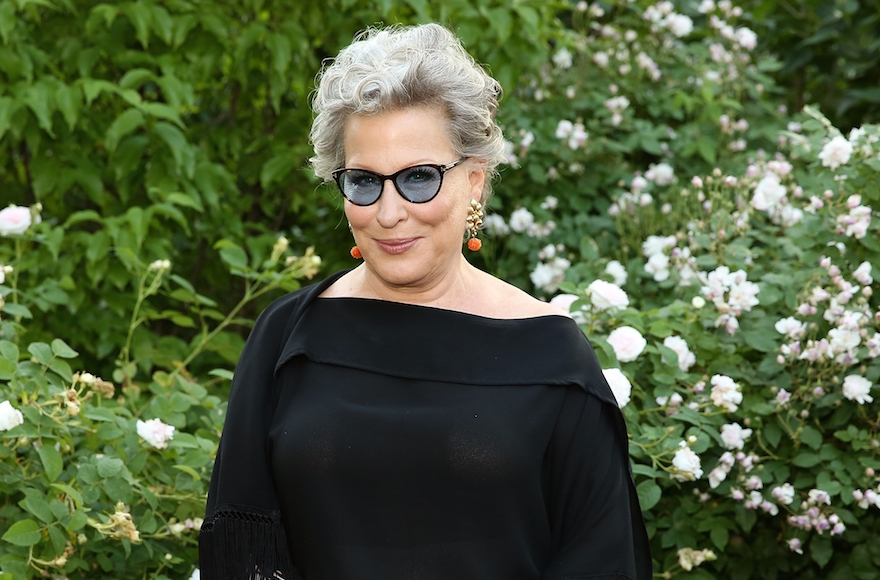 “Hello, Dolly” is nominated for 10 Tony Awards, including Best Revival of a Musical. With only two competitors in that field —”Falsettos” and “Miss Saigon” — this widely-loved production is expected to win.

If you’re hoping to catch Midler singing a tune from the show, you’ll likely have to score a ticket — for which box-office prices top out at $748: Midler was deemed “unlikely” to sing at the Tonys this year. 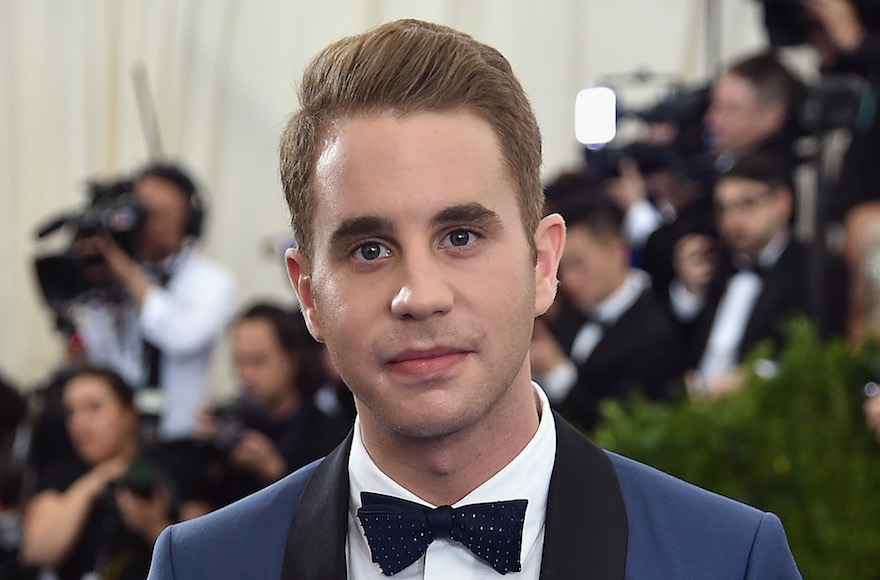 Ben Platt at the Metropolitan Museum of Art in New York City, May 1, 2017. (Theo Wargo/Getty Images For US Weekly)

Speaking of shoo-ins, Ben Platt, another Jewish actor, is probably the closest thing there is to one. I’m not a betting kind of woman, but I would put money on him taking home a Tony for Best Lead Actor in a Musical for his portrayal of anxiety-ridden outsider Evan Hansen, the title character in this dark musical about a boy who gets caught up in a lie after the death of a classmate.

Ben Platt grew up performing at a Jewish summer camp — watch him talk about his Jewish childhood on “Late Night with Seth Meyers” here, where he also sings a rendition of “Luck Be a Lady” in Hebrew.

Though “Dear Evan Hansen” is favored to win Tony’s final award of the evening — Best Musical — don’t rule out “Come From Away,” a touching, based-on-a-true-story musical about a small Newfoundland town. After the September 11 terrorist attacks, the population of Gander temporarily doubled when 38 airplanes were rerouted there.

The musical is about how people come together and help each other through the darkest times. The Jewish connection? Aside from the show’s writers, married couple Irene Sankoff and David Hein (their previous show was called “My Mother’s Lesbian Jewish Wiccan Wedding”), one of the characters of “Come From Away” is a rabbi and, in a very moving scene, he sings “Oseh Shalom” as characters pray in many languages.

Patti LuPone may not be Jewish, but she’s played a rabbi on TV.

And now, she’s nominated for Best Lead Actress in a Musical in “War Paint,” which chronicles the rivalry between cosmetics magnates Helena Rubinstein (played by LuPone) and Elizabeth Arden (played by Christine Ebersole, also nominated in the same category). The musical, which is up for four Tony Awards, doesn’t shy away from the anti-Semitism that Rubinstein, a Polish immigrant, faced — she was denied an apartment at 625 Park Avenue, for example, but got her revenge when she bought the entire building.

“War Paint” isn’t nominated for Best Musical — but it was just announced there will be a performance from the cast during the awards ceremony.

To get a LuPone fix before then, check out this clip from her recent appearance on “Crazy Ex-Girlfriend.”

These 2 non-Jews are stars of Yiddish theater